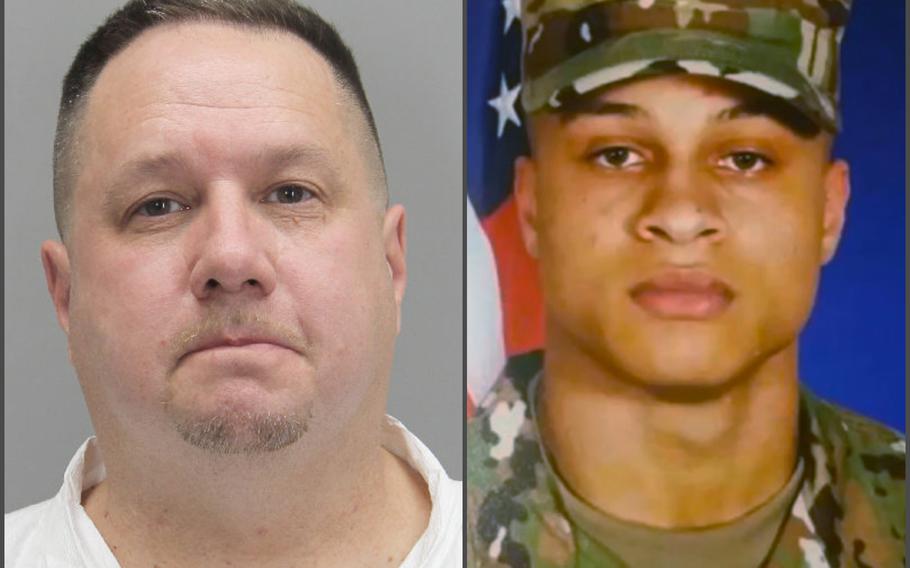 A Fairfax County, Va., man was found guilty of first-degree murder Thursday for killing his next-door neighbor, who was a member of the Maryland Army National Guard.

The slaying followed an escalating feud that began with mundane complaints over trash and noise and ended with a barrage of gunfire. Prosecutors said in court that Michael Hetle, 54, was so enraged that the homeowners association and police had not done more to act on his complaints about noise, drinking and other issues with 24-year-old Spc. Javon Prather that he took matters into his own hands.

Hetle, then a NASA executive, fired blast after blast at Prather one afternoon in March 2020 as horrified residents of their Springfield block and the victim's wife looked on. The men had fought earlier in the day.

A Fairfax County jury deliberated for nearly eight hours before finding Hetle guilty of the murder charge and a firearms violation. Hetle could face up to life in prison when he is sentenced Jan. 28. Prather's family members let out sighs of relief when the verdict was read but declined to comment afterward.

Hetle argued in lengthy testimony during the trial that he acted in self-defense. He said that he thought Prather was armed at the time of the shooting and that his next-door neighbor had repeatedly threatened him in the months leading up to the slaying.

Prather's wife felt the slaying was in part motivated by racial bias, and testimony at the trial revealed Hetle often referred to Prather by a racial epithet for Black people. Hetle's attorney denied that contention. Hetle is White and Prather was mixed race.

The killing was captured by Ring video, which prosecutors played repeatedly for the jury during the course of the trial. At one point, a relative of Prather's began sobbing uncontrollably and collapsed to her knees as the harrowing clip ran, prompting a court recess.

The video shows Hetle's front door swinging open on the afternoon of March 4, 2020, before he appears to fire a slug into Prather's stomach without any warning.

On the video, Prather turns and runs. He stumbles and jumps down the front steps of Hetle's home as Hetle shoots six shots at him. Hetle fires a seventh and final shot into Prather's prone body after he collapses on Hetle's driveway.

Hetle then turns, points his gun at Prather's wife and shouts: "You want it too?"

Hetle testified that the neighborhood spat had spiraled out of control in the months before the slaying and that he believed Prather wanted to hurt him. Hetle told the jury that Prather threatened him on numerous occasions, including once when he had a knife, and had stalked him as he walked his dog.

"It was this look of pure rage," Hetle said of Prather's face before he opened fire. "His eyes were wide and bloodshot."

The path that led to the deadly confrontation began roughly three years earlier with the type of quotidian dispute common among neighbors. In 2017, Hetle said, Prather asked to use Hetle's hose to wash off his car. Hetle testified that he refused but later heard the water running and caught Prather using it.

Hetle testified that other minor incidents followed the same year, but the interactions between the neighbors, whose townhouses shared a wall in the Daventry community, gradually grew more and more acrimonious.

At one point, Janelle Prather, the victim's wife, was charged for allegedly hurling items at Hetle's house and car, and Hetle got a restraining order against her. The neighborhood association also took legal action against Janelle Prather over conditions at her home.

Hetle also complained to police repeatedly about the Prathers, but Burnham said in his closing statement that Hetle's accusations were often trumped up. Javon Prather worked at a Giant grocery store. As a guardsman, he was an infantryman with Bravo company, 1st Battalion, 175th Infantry Regiment, for almost four years and during that time was awarded the Army Reserve Component Overseas Training Ribbon for a training mission in Germany, a spokesman for the Maryland National Guard told Stars and Stripes in 2020.

Janelle Prather did not testify at the trial, but she said in a previous interview with The Washington Post that she and her husband would have avoided Hetle if they had known about his history.

Hetle was a former Washington state police officer who was disciplined after an Ethiopian immigrant accused him of bias during a traffic stop years earlier. Hetle had also shot and killed two people in the line of duty. Both slayings were found to be justified.

The morning of the shooting, Hetle sent an email to the neighborhood association warning that the the feud could "result in tragedy," Fairfax County prosecutor Joe Martin said.

Martin called it a threat, but Hetle testified during the trial that he simply wanted to warn the homeowners association thathe felt the Prathers' activity was making their neighborhood less safe.

Hetle testified that he grew concerned the afternoon of the shooting when Javon and Janelle Prather pulled up in their car and appeared to be drinking and listening to music at a loud volume, so he called police.

Hetle later told Javon Prather that he had summoned authorities, before the neighbor went inside his home and began pounding the common wall between the properties, Hetle testified. The Ring video showed Javon Prather leave his home and walk next door to Hetle's residence.

Hetle testified that he thought he saw something in Javon Prather's hand as he made his way there. He testified that Prather then banged so violently on his door that it was knocked ajar.

Hetle testified that he feared Javon Prather was about to enter, so he trained his gun on the door. Hetle said he then opened the door and thought he saw his hand holding something in Prather's pocket, which he thought might be a handgun. Prosecutors said Prather was unarmed.

Fairfax County Commonwealth's Attorney Steve Descano said in a statement that he planned to seek a life sentence for Hetle.

"Mr. Prather served in the Maryland National Guard and had a bright future ahead of him," Descano said. "He should be with his family and community today."