‘Running out of options’: Fight to protect giant sequoias has gotten experimental 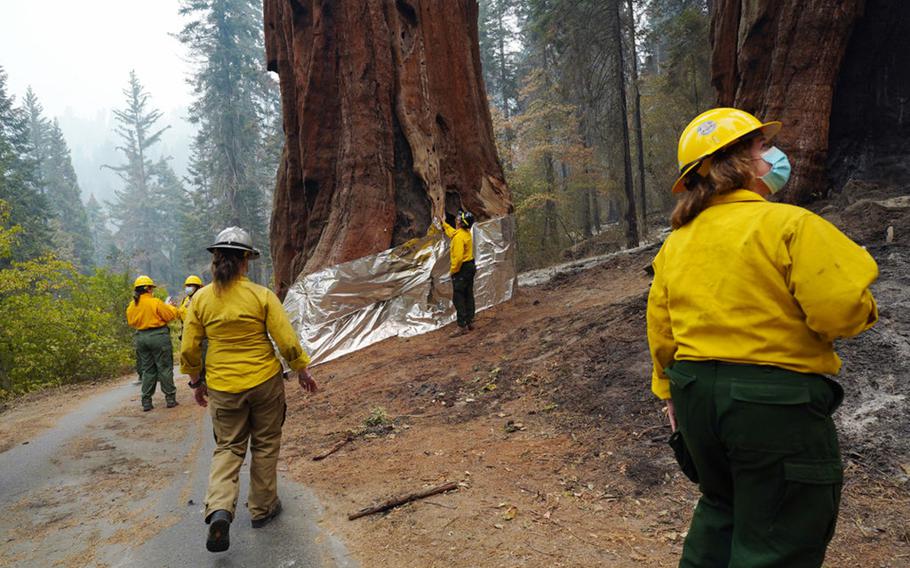 (Tribune News Service) — As flames from the KNP Complex threatened to race up a steep slope toward the remote Muir Grove of giant sequoias, officials at Sequoia and Kings Canyon National Parks had to think fast.

The right conditions could send flames shooting into the tops of the towering trees in Sequoia National Park, slaying the old-growth giants.

Christy Brigham, chief of resources management and science for the parks, was desperate to save the ancient trees, which couldn’t be reached to treat with traditional protection methods. She opted to go “experimental.”

Brigham made the call to drop a goopy fire-retardant gel on a small portion of the grove.

The polyacrylamide gel, similar to what’s in baby diapers, is thicker and stickier than the typical retardant used in aerial firefighting tactics. The theory was that it would adhere better to the grove’s canopy and could be reactivated with water just before flames arrived if it dried out.

But the gel had never been used on sequoias before, Brigham said.

“Do we want to try this?” she said. “Or do we want to take our chances that another grove … of irreplaceable 2,000-year-old trees” will be incinerated?

The novel firefighting method is the latest that fire officials and tree experts have implemented in the face of twin wildfires that have been rampaging through California’s southern Sierra Nevada for the last month.

Since igniting Sept. 9 amid a huge lightning storm, the KNP Complex and the nearby Windy fire — which is burning in Sequoia National Forest and the Tule River Indian Reservation — have charred more than 184,000 acres combined , including at least 26 groves of giant sequoias.

The massive trees have adapted through the centuries to withstand low-intensity fire, and they even need flames to reproduce. But experts say the drought-stressed sequoias are increasingly no match for extreme blazes stoked by climate change and a buildup of bone-dry vegetation.

In an effort to protect them, crews have wrapped the massive trees in fire-resistant aluminum material akin to tinfoil, rigged sprinkler systems in rugged terrain, set preemptive fires to burn away potential fuels and even sent climbers up a 200-foot tree to douse it with water.

“We’re admittedly in kind of a trial-and-error phase,” said Garrett Dickman, a botanist with Yosemite National Park assigned to the Windy fire. “Some of it’s going to work, and some of it’s not.”

Many are desperate to avoid a repeat of last year’s Castle fire, which wiped out 10% of the giant sequoia population in the Sierra Nevada. At least 7,500 trees burned in that blaze.

It’s not yet clear how well all of the tactics are working, including those in the Muir Grove. Though the Windy fire is 85% contained, firefighters have made far less headway on the KNP Complex, which is still at a stubbornly low 20% containment.

Damage assessments for the blazes are still in the early stages, fire officials say. Heavy smoke has frequently prevented helicopters and drones from flying over the burn area to survey potential damage, and some groves are tucked far away in inaccessible terrain.

But parks officials are bracing for bad news.

Dickman has already confirmed 74 dead sequoias in terrain charred by the Windy fire, and he suspects that aerial views will reveal more extensive carnage.

A trip to Deer Creek Grove early last week revealed it “took a lot of heat” when fire blazed through the state’s southernmost stand of sequoias around Sept. 23. He said there was “heavy scorch” to many trees. Still, he noted, they had green branches and there was a chance they’d survive.

Farther north, Brigham said Wednesday that at least two groves — the Redwood Mountain Grove and the Castle Creek Grove in Sequoia and Kings Canyon National Parks — “appear to have burned at least partially under high-severity fire” in the KNP Complex. Two days earlier, an enormous pyrocumulus cloud formed near Redwood Mountain Grove, indicating the likelihood of extreme fire behavior. And it’s now believed that hundreds of towering sequoias may have perished in high-intensity flames.

Some groves have been hit even worse, Dickman said. He was able to prepare about five sequoias in the small Starvation Creek Grove for incoming flames, raking away pounds of pine needles, small trees and other potential fire fuel from their hulking bases. But a photo taken after the Windy fire had passed through showed those five were probably the only trees that survived.

“We are seeing loss of some of our sequoias, including some of the monarchs” amid the Windy fire, said Teresa Benson, a supervisor for Sequoia National Forest.

Benson said a task force has been established to provide “sequoia first aid.” The team has been helping Dickman prep the giant trees that are in the path of encroaching flames. Last week, two 20-person hand crews, several chain-saw-wielding personnel and a skidgen — a vehicle that’s a cross between a bulldozer and a firetruck — were on hand.

Climbers scaled a massive sequoia standing next to the well-known Bench Tree on the Trail of 100 Giants to extinguish heat in a smoldering cavity at its top. Two weeks earlier, officials confirmed that flames from the Windy fire had reached the top of the Bench Tree, named for the natural bench-like formation at its base. Windy fire incident spokesman Steve Rasmussen said helicopters had conducted as many as 14 water drops directly onto the tree to extinguish the flames burning atop its crown.

Sprinkler systems have been installed elsewhere, including along the Trail of 100 Giants in Long Meadow Grove and the around the well-known General Grant Tree in a grove tucked inside Kings Canyon National Park. A photo published by the National Park Service shows sprinklers spraying the colossal tree with water.

But there’s debate over some of the less-routine firefighting methods.

As the SQF Complex — which included the Castle fire — raged last year, the President George Bush Tree in Giant Sequoia National Monument was swaddled in a fire-resistant aluminum material to protect its base from lapping flames. Brigham thinks it was the first time the fire wrap was tested on a giant sequoia — and possibly any tree.

The tree, named after George H.W. Bush, survived, and a precedent was set, Brigham said. This year, the famed General Sherman Tree — considered the largest tree on Earth by volume — got the same special treatment when the KNP Complex threatened it. Like the Bush tree, the General Sherman is still standing.

But the wrapping doesn’t always work perfectly. Flames can get under the fire-resistant blanket, trapping heat beneath. That happened with two of the Four Guardsmen trees that stand at the entrance of the Giant Forest, a tourist haven in Sequoia National Park. After the KNP fire roared through, crews stripped the blankets off the pair and sprayed them down with water, “or else it would have insulated that fire underneath them to keep it cooking,” said Mark Garrett, a spokesperson for the KNP Complex response.

With prevention in place, “we don’t have to take all these drastic actions,” Dickman said. “These actions are expensive, some of them are even dangerous — like putting people in airplanes to drop gel and retardant. That’s people putting their lives at risk every time they get in that ship.”

But frequent, large wildfires sometimes race through an area before it can be treated with a controlled burn or limit the time when such preventive methods can be conducted.

And with fires burning faster, hotter and more intensely than in years past, crews are forced to pull out all the stops in order to save as much of the forests as they can.

“We’re pushed up against the wall,” Dickman said. “That’s why you’re seeing all these kind of splashy techniques — because we’re running out of options.”