Hundreds of giant sequoias may have been killed in California fires, park officials say 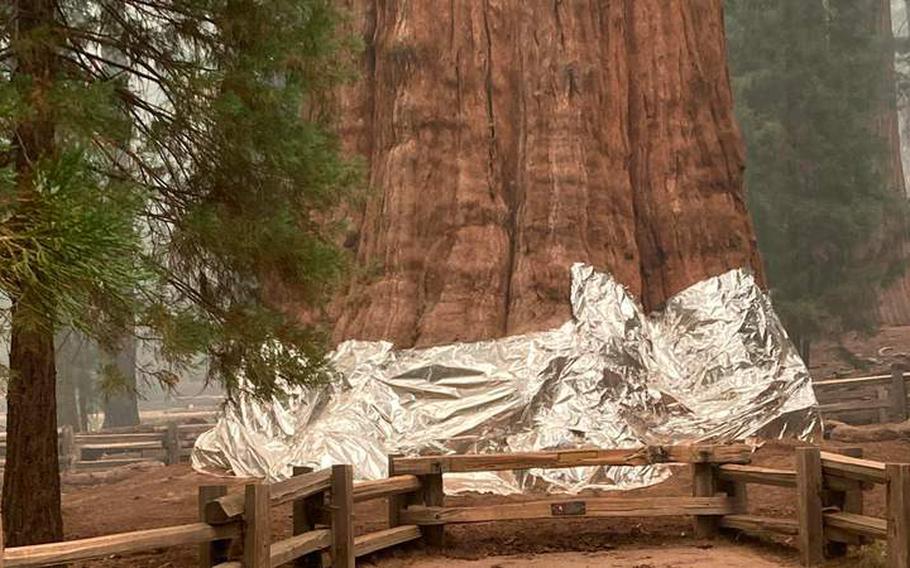 Following a year when authorities said wildfires burned down an unprecedented amount of sequoias, infernos blazing through Sequoia and Kings Canyon National Parks are once again threatening the giant trees, underscoring how the increasing intensity of wildfires, coupled with drought and the effects of climate change, have not only begun to take a toll but also endanger the survival of the species.

Having scorched almost 86,000 acres since it was caused by lightning on Sept. 9, the KNP Complex Fire — formed by the Colony and the Paradise Fires — is tearing through the northwestern sector of California’s Sequoia National Park in the Sierra Nevada, the only region where these trees dwell. The complex is just 11% contained.

With the flames still torching through the sequoias’ land, authorities say it remains too early to determine the scope of the damages. Photos of giant trees wrapped in aluminum have circulated since the fire began threatening the groves — showing the great lengths officials have gone through to protect some of the most ancient and largest trees in the world. Yet the mix of the infernos’ fast-changing behavior and the lack of access to certain areas in the park has led authorities to prioritize the protection of certain sequoias.

Since igniting, the inferno has encroached over at least 15 groves, said Christy Brigham, chief of resources management and science for Sequoia and Kings Canyon National Parks. Two of them — Redwood Mountain and Castle Creek — have been subjected to high-severity fire that can crawl over the trees’ canopies and “has the potential to incinerate and torch these very large old trees,” she said.

The extent of the damage to those groves remains unknown. Redwood Mountain grove is home to 5,509 sequoias that are more than four feet in diameter — representing about 20% of the massive trees’ population in Sequoia and Kings Canyon National Parks. Castle Creek grove has 419 sequoias.

“No one should assume that all of those trees have been killed,” Brigham said. “But the fear is definitely out there. We won’t know until we’re able to make the assessment, but the fires were severe enough to possibly impact hundreds of trees.”

To the south of this blaze, the Windy Fire has scorched through almost 98,000 acres in Tule River Indian Reservation — near the Giant Sequoia National Monument area of Sequoia National Forest — since it was also sparked by lighting on Sept. 9.

Like the KNP Complex Fire raging to its north, the Windy Fire has resulted in the loss of dozens of sequoias. Despite the inferno being 80 percent contained, its flames are still burning through 11 groves, said Garrett Dickman, a National Park Service botanist in Yosemite National Park.

The impacts of the fire are mixed. While some groves fared well, others were subjected to high-intensity fires that could result in the sequoias’ deaths. In Starvation Creek grove, the scenario is grim, Dickman said.

“In Starvation Creek, most of those trees, I think are going to die,” he said. “From what I could tell from that group, only four trees survived.”

The preliminary information, the botanist added, places the death toll at least 74 sequoias.

The combination of the fire’s danger with the often hard-to-reach terrain where the trees grow, renders making an assessment difficult. Yet, their initial survey brings back memories of last year’s Castle Fire — a “shocking” inferno that wiped out an unprecedented 10% to 14% of sequoias.

Compared to last year’s blaze, the Windy fire has burned through half as many clusters of trees. The sequoias in these groves, Dickman said, are smaller too. However, this year, the inferno could exceed the Castle Fire’s mortality rate.

“That’s going to be as bad as the worst of the Castle Fire,” he said. “It was up to 74% mortality in that fire. Starvation Creek could well beat that.”

Since the two wildfires began, firefighter have taken extraordinary measures to protect the sequoias — even assembling a specialized task force of over 50 National Park Service personnel and firefighters to safeguard the ancient trees.

Popular trees, deemed “monarchs” for their impressive height, were wrapped in protective aluminum covers. Firefighters also conducted burnout operations — methodically guiding the fire through the grove, removing patches of vegetation and creating containment areas. Sprinkler systems were installed to cool the tree’s roots. Some personnel even climbed to the sequoias’ tops to extinguish the flames.

The undertaking has yielded to some success, with iconic trees like the General Sherman — the largest in the world by volume — General Grant and the Four Guardsmen all surviving the flames.

Still, the loss of even one tree — even if it is unnamed and less-known — is “utterly heartbreaking,” said Savannah Boiano, executive director of the park’s nonprofit partner, the Sequoia Parks Conservancy.

With the KNP Complex Fire underway, the nonprofit is collecting funds for tree recovery and restoring access to the park.

The calculus on what trees merit extra resources comes down to different factors, Brigham said. Park officials and scientists do a risk assessment before the wildfire season’s onset. Once a blaze sparks, the grove’s accessibility, the inferno’s movement and its potency are taken into account to determine which actions to take.

With their old age and distinctive looks, the emblematic nature of the General Sherman and other named trees grants them an “additional layer of protection” even if their area is at a low risk of high-severity fire.

“We call them trees of special interests, and we started taking special care of those trees in the nineties because they are so significant,” the chief of resources management and science said.

For centuries, sequoias have been enmeshed in the country’s culture. They carry the names of national historical figures and have attracted tourists far and wide to marvel at trees that are capable of dwarfing people. But climate change could result in the destruction of the symbolic sequoias.

With their thick bark, sequoias are naturally built to resist fires. They also need their heat to burn competing plants and dry out the cones until they are able to release their seeds. In fact, fire seasons are frequently followed by a larger number of seedlings, Dickman said.

But even if sequoias need blazes to survive and reproduce, problems arise when large, uncontrolled fires reach the sequoias’ canopies, which makes it harder for the trees to recover and keep growing. The alarming frequency of infernos that are larger, hotter and faster is imperiling the species — especially when it is compounded by a drought.

“We’ve constantly been saying that sequoias are a fire-adapted species — and they are — but there’s just limits to what they can handle,” the botanist said.

While the outlook seems grim, Dickman still has hope — after all, people have rallied behind the trees for years, he said.

“This might be their greatest challenge, but I fully think that people will step up to that challenge,” he said. “They have in the past and they will again. But we can’t only think of them when the fires are burning.”