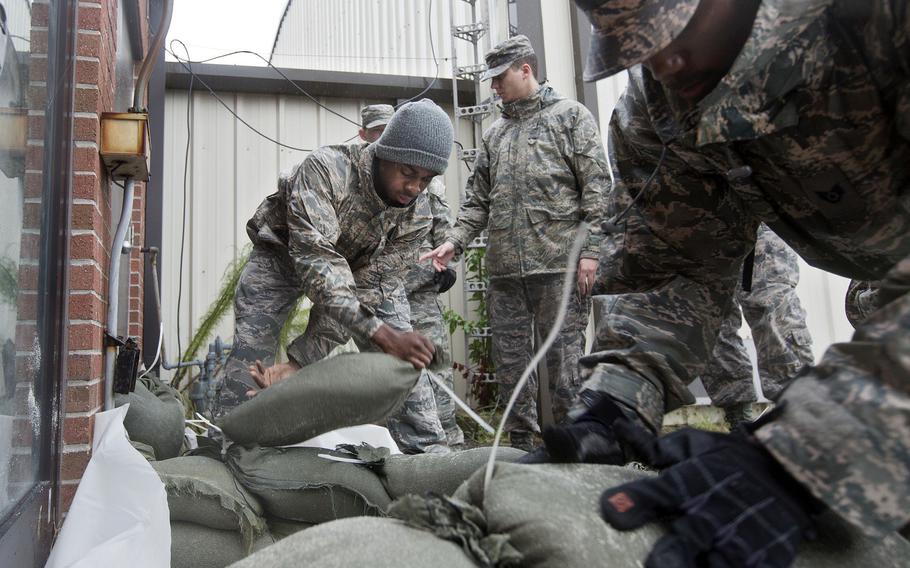 Airmen and volunteers place sandbags as heavy rain falls outside of a building at Langley Air Force Base in preparation for Hurricane Joaquin in October 2015. (Kaitlin McKeown, Daily Press/TNS)

NEWPORT NEWS, Va. (Tribune News Service) — Rep. Robert C. “Bobby” Scott, D-Va., wants the military to do more to address flooding and the pollution that stormwater runoff brings to military bases — especially those located in and around Virginia's Chesapeake Bay.

He introduced a bill authorizing a new Department of Defense stormwater management program, with bipartisan support.

“We have a responsibility to reduce base flooding to support military resilience as well to reduce stormwater runoff into the waterways that define our way of life here in Hampton Roads,” Scott said.

The issue is critical in Hampton Roads, where flooding has already affected operations at Naval Station Norfolk and Langley Air Force Base, and runoff from many sources is a major source of pollution in the bay. But Scott said many other bases and military communities struggle with drainage issues.

DOD should give a priority to projects that retrofit buildings and grounds on bases and on improvements to access roads, the bill says.

It identifies stormwater ponds and other measures to slow the flow of stormwater into waterways, as well as replacement of impermeable paving with material that lets water seep into the soil as the type of projects DOD would fund. In addition, it says planters, cisterns and rain gardens could also be funded through the program

The bill, called the Enhancing Military Base Resilience and Conserving Ecosystems through Stormwater Management (EMBRACE Stormwater Management) Act, does not yet have a number. The co-sponsors include Hampton Roads Reps. Rob Wittman, R-Westmoreland, and Elaine Luria, D-Norfolk.