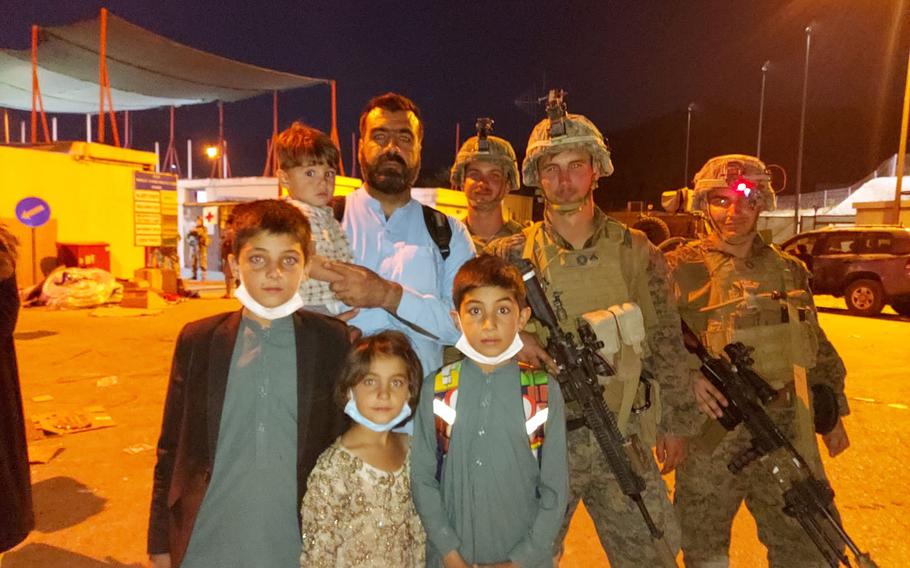 Atif Ahmadzai stands with four of his five children and U.S. Marines after he gained entry to the international airport in Afghanistan that paved the way for their trip to the United States after the fall of Kabul. They are seeking to reach New Haven, Conn. (Hartford Courant/TNS)

(Tribune News Service) — Atif Ahmadzai was back home in Afghanistan with his wife and five children when the ground abruptly shifted.

The former U.S. Army translator now living in New Haven had expected to stay two months, but he was stunned by the speed of the Taliban’s takeover of the country. A U.S. resident since 2019, he’d been working to bring his family over but realized time was running out — and he needed to get out quickly. As someone who played a key role in helping the Americans, Ahmadzai was at high risk.

Overnight, he became one of the thousands of Afghanis desperately trying to flee.

But Ahmadzai had help back in New Haven, Conn.

Former U.S. Army Capt. Michael Kuszpa, who served in the trenches with Ahmadzai as they dodged explosives and ambushes, was working to get Ahmadzai and his family out. Their shared experiences during the war created a bond they both said was like being brothers.

With most American soldiers unable to speak the language in Afghanistan, Ahmadzai paved the way multiple times in speaking with military members and local residents to diffuse misunderstandings and potentially deadly situations, Kuszpa said.

He recalled one time that American special forces were cleaning a detention cell and unknowingly swept up a copy of the Quran, the most sacred book of Islam. Ahmadzai was able to explain to the Afghans that it was a misunderstanding as the soldiers had not realized that the book, written in Arabic and not in English, had been mistakenly included in the garbage.

“That could have been a huge, unintentional bloodbath if somebody had fired one single shot at the other,” Kuszpa said. “It would have been absolutely horrendous. Atif actually diffused a cultural, potential catastrophe that unfolded.

“He saved not only my life, but the lives of other Americans and Afghans by being able to relay pertinent, time-sensitive information and work through cultural misunderstandings — not only between our military and the Afghan military, but also the military and the locals.”

So when Ahmadzai needed help getting out of Afghanistan, Kuszpa returned the favor trying to help his friend escape. He worked with a contact who had a colleague at the State Department to speed the paperwork that made the escape possible. In similar fashion, Kuszpa had helped Ahmadzai gain a special visa in 2019 so that he could come to New Haven for the first time.

“I was planning to spend two months in Kabul visiting my family and friends. I tried for four days to come [to the airport],” Ahmadzai, 43, recalled. “Mike gave me a number and said go to the back gate at the airport, and I did. Guards were firing to spread the crowd. My family was scared.”

On the way, though, they encountered a Taliban checkpoint.

“They had a checkpoint, and they asked me to unlock my phone,” Ahmadzai said.

That could have ended the trip right there. His phone contained important information about his planned escape, but what popped up on the phone was photographs of his children, ranging in age from 2 to 12. The family was allowed to proceed.

After finally getting inside the heavily guarded airport, the ordeal was still not over.

“We stayed three days and two nights at the Kabul airport,” Ahmadzai said. “The water was warm, and my son got sick.”

Finally, they were cleared to board a military plane and left Afghanistan.

‘’We spent two nights and three days in Qatar,” he said. “Then we spent two days in Germany. Then we got to Dulles, Virginia, and spent another night there.”

The next step in the journey will be to leave an American military base in Virginia and, eventually, a return to New Haven.

The family’s expected arrival in New Haven will mark a major new step for them — and a new position for Ahmadzai. After previously working at a commercial bakery and a medical instrument manufacturer, Ahmadzai now intends to work as a translator for New Haven-based Integrated Refugee and Immigrant Services, a nonprofit agency that is known as IRIS.

His friend, Kuszpa, is working as a middle school science teacher in New Haven and has been trying to help his colleague with the expense of relocating his entire family. Kuszpa has raised more than $2,700 toward a goal of $10,000 on a GoFundMe page that he established to help; Ahmadzai needs a two-bedroom or three-bedroom apartment for the family of seven.

Ahmadzai’s long association with Kuszpa started in their days together in Afghanistan in 2004 and 2005. They got back in touch again through Facebook and talked about Ahmadzai coming to the United States. When he finally had his special visa approved in 2019, he reunited with his former colleague.

“I picked him up from LaGuardia, and we started getting him established in New Haven,” Kuszpa said.

Since he is now in the United States, Ahmadzai says he is not afraid of the Taliban and does not mind having his name published. But he is sorry for what has happened to his country.