For an Afghan father, escape was his gift to his daughters 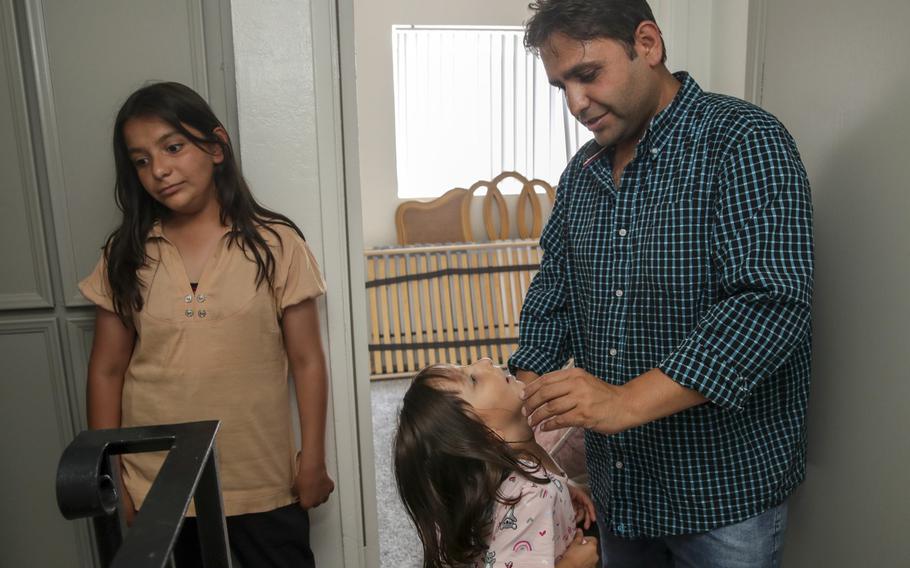 EL CAJON, Calif. (Tribune News Service) — Sayed Omer Sadat imagines the world his daughters would have inherited had the family not escaped from Afghanistan.

He thinks of 11-year-old Asma, who he dreams will one day become a doctor. Of 6-year-old Aqsa, who loves lipstick and eye shadow and could one day be a makeup artist. Of 9-year-old Gulsom, who can’t talk and relies completely on her father and mother.

He thinks about what would have happened to them had the Taliban seized him because of his work for the U.S. military.

The girls have only ever known a country without the Taliban in control. But Sadat knows that more than 20 years ago women were confined to their homes, denied work and education, and beaten for wearing nail polish.

“The main concern was the education of my daughters,” said the 35-year-old, his love for his girls etched on his careworn face. “We love our daughters and wives to study and go further.”

That is why they landed in San Diego on July 20, staying at a hotel and then with a friend as a resettlement agency struggled to find them — and many other Afghan refugees — permanent housing. The family was finally able to move into a two-bedroom apartment in a complex on a busy street in El Cajon.

In early July, President Joe Biden assured Afghan allies that “there is a home for you in the United States if you so choose, and we will stand with you just as you stood with us.” But some refugees have burned through their savings waiting for housing. Many rely on grassroots volunteers to furnish empty apartments, raising the question: What constitutes a “home”?

For years, Sadat’s home was a four-bedroom, four-bathroom house in Kabul, where he watched his daughters take their first steps. Home was where his wife worked as an elementary school teacher and where his brother and his aging mother still live.

Now, America will be the theater of the Sadat family’s dreams. But it is not home quite yet.

Sadat was 7 years old when his family fled the Afghan war. They lived in Peshawar, Pakistan, for about seven years and returned to Afghanistan only after the U.S. invaded in 2001 in the wake of the Sept. 11 terrorist attacks.

After he graduated high school, Sadat began working as a computer operator with the U.S. Army Corps of Engineers. He later became a site supervisor for the maintenance of military bases, overseeing electricians and plumbers.

He applied for a special immigrant visa in August 2017, hoping to leave one day with his family for the U.S.

Last year, he returned home to Kabul only once a month. He would sit in the back of a 60-person passenger van as it passed through Taliban checkpoints, hoping no one knew he was headed to a military installation in Mazar-i-Sharif.

This year, his wife and mother urged him to resign. Three days after he received his visa in July, Sadat bought one-way tickets out of Afghanistan for his family. They flew first to Dubai in the United Arab Emirates on July 19 and then to Los Angeles.

They brought two bags with them, filled with clothes and documents. Sadat gave everything in his home to his brother. The relief he felt upon arriving in San Diego was worth it.

“We are lucky that we left Afghanistan on that day,” he said. “We can just pray for Afghans left behind.”

His family has watched the situation change dramatically since. The month after he left, the Taliban captured the city where he’d worked. Soon after, they took the capital where he and his family lived.

He watched from San Diego as thousands of desperate Afghans swarmed the airport, some clinging to the side of a U.S. military transport plane before falling away. As the Taliban urged Afghan women to stay home from work. As an attack by Islamic State terrorists killed 13 American service members and at least 170 Afghans.

“Twenty years back — this was the same situation that today we have in Afghanistan,” Sadat said. “Everything reversed back.”

Now, as Sadat was so many years ago, his daughters are refugees.

But unlike him, he said, his children will grow up “in a country that has everything.”

In a lime green apartment complex, about 10 miles from where Sadat and his family were settling in, three Afghan families have arrived in the last month. Nancy Harman, a lead organizer with Helping El Cajon Refugees, is an unofficial den mother for those who have arrived there over the years.

When Omar Khaliqyar, whose parents left Afghanistan 3 1/2 years ago, sees her, he runs into her arms. When Harman leaves, the 2-year-old breaks down in tears.

This year, Harman wrote a letter to the U.S. Embassy on behalf of a woman stuck in Afghanistan, paid her application fee and helped her fill out forms to escape. She was able to leave the country on Aug. 16 and now lives at the apartment complex with her son.

“Sometimes on my way home I’m just crying, because I feel for these families,” Harman said.

In the apartment next door to the Khaliqyar family, 14 pairs of shoes lay scattered outside. Inside, 11 family members shared the 500-square-foot one-bedroom as six of them waited for permanent housing. They kept the green front door open, trying to catch a breeze through a magnetic screen.

As he sat cross-legged on an Afghan carpet, Khan Mula explained in Pashto to an interpreter that he, his wife and four of their six children fled Afghanistan in mid-August. They faced threats from the Taliban because Mula worked with the U.S. military for almost 10 years. His 21-year-old twin sons remain in Afghanistan.

Mula’s nephew — who has a newborn and two toddlers —offered to host him and his wife, and their 16- and 17-year-old sons and 11-year-old son and daughter. Despite the cramped conditions, Mula described finally being able to sleep without fear of the Taliban.

On a recent Monday afternoon, the Sadat family peered out of an upstairs window as a woman with curly blond hair parked a black Honda Pilot outside their empty apartment.

A pink queen-size mattress was strapped to the top of the car. A white mattress was stuffed inside the trunk, topped with bed frames, a new television and a shoe rack. The only available space was the driver’s seat, where Jill Galante sat.

Within minutes, everyone was hard at work. Galante handed a box with a side table that she got at an auction over to Asma and a green-and-orange soccer ball to Aqsa. She then got Sadat to help her lug out a mattress.

For the last 4 1/2 years, Galante has worked with refugees after they are resettled. Through the Helping El Cajon Refugees Facebook page, people have volunteered time to set up apartments and drop off donations.

“Nobody thinks a toothbrush is important until you don’t have one,” said lead organizer Galante, whose accent gives her away as a Bostonian. “I don’t want to have them reach for something and remember that they left everything behind.”

She and other volunteers went from setting up one or two apartments a week to recently doing five in a seven-day period.

Galante said resettlement agencies have warned them to “get ready for a tsunami.” Already, the group fields messages from families arriving on short notice at airports in California with nothing but the clothes on their backs.

A few weeks ago, Galante was asked to check on a family that had just arrived. When Galante visited the apartment, she said, the parents and two children were sleeping on ripped couch cushions they had pulled from a dumpster.

The same week that they set up Sadat’s apartment, volunteers prepared another for a couple and their baby girl. The family had spent $2,000 for a two-week stint at a hotel as the three of them awaited permanent housing. After they’d drained their savings, a friend flew them to Sacramento and housed them there.

“Right now, everything is just so bad,” said Galante, who has a master’s degree in family therapy. “If you can help, you should. It’s a moral obligation. You are one of two people on this earth; you’re either being helped or you’re a helper.”

For hours on that Monday afternoon, about a dozen volunteers placed futons, lamps, a rug, a coffee table and a TV in the Sadat family’s living room. They stocked the kitchen with pots and pans, plates, mugs and silverware. They filled the pantry with packs of spaghetti noodles, cans of diced tomatoes and jasmine rice. Two of the volunteers were Afghan refugees whose families had fled Afghanistan after the Soviets invaded in 1979.

As Galante tried to figure out where to place a dresser in the couple’s room, she called out to Sadat, “Where’s the wife? Where’s the boss? I need the real boss.”

“She’s the boss,” Sadat agreed, looking over at his wife.

“We are your king,” she joked to her husband, breaking into a wide grin.

In the 80-degree home, with box fans as their only relief, Sadat tried to figure out how to turn on the air conditioning, before Galante explained how expensive that would be.

As Asma helped arrange paper flowers in a basket on the dining room table, Aqsa — who wore a plastic stethoscope around her neck — used a tongue depressor to check inside Gulsom’s mouth. They knew a little English from watching cartoons back home, enough to say “excuse me” as they navigated around the apartment and “thank you” when a volunteer surprised the girls with brand-new scooters.

Throughout the day, Aqsa clung to her father as the koalas on her pink dress might the trunk of a eucalyptus tree. When told they were lucky to have him, Sadat corrected a reporter: “I’m lucky that I have them.”

The next weeks would be filled with stress. Getting jobs to pay the nearly $2,000-a-month rent, figuring out how to apply for disability for their daughter and navigating a new country. But the simple act of volunteers filling his apartment made it a little easier to bear.

“From the bottom of my heart I say thank you to them,” Sadat said.

Three days later, the same day that a bomb tore through people in Kabul, Sadat’s daughters would start school. Asma would wear a sweater with the words “smash,” “bang” and “pow” written on it, her little sister Aqsa a pink plaid shirt and blue jeans.

That night, Aqsa would remind her mother to wake her up before the sun rose.

She didn’t want to be late.