With the lights off, food spoiling, gas pumps out of order, New Orleans faces an extended power failure

by
Will Englund, Marc Fisher and Jacob Bogage
• The Washington Post • August 30, 2021 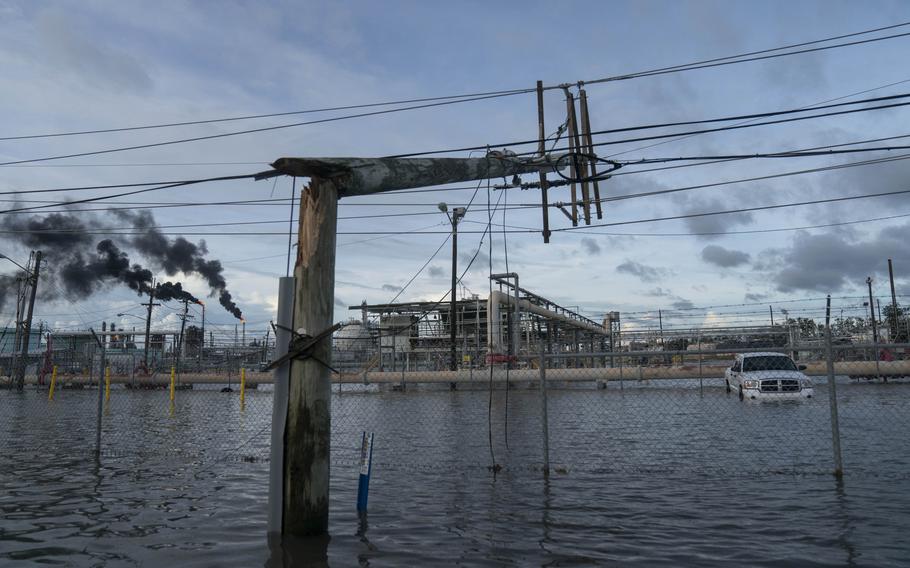 Broken power lines, destroyed by Hurricane Ida, are seen along a highway near a petroleum refinery on August 30, 2021 outside LaPlace, La. (Michael Robinson Chavez/The Washington Post)

Fully restoring power to virtually all of New Orleans and much of its surrounding suburbs could take days, or even weeks, after Hurricane Ida knocked all eight electric transmission lines feeding the city out of service, the utility company Entergy said. It warned that it could take several days just to assess the damage.

A transmission-line tower on the border of Avondale and Bridge City, across the Mississippi River from Harahan, La., and just upstream from New Orleans, collapsed Sunday in the ferocious winds.

As powerful as the storm was, the damage it wreaked on Louisiana’s power grid was yet one more example of the weaknesses of the country’s electricity systems. Coming on the heels of extensive blackouts in Texas last winter and in California last summer, Sunday’s failures demonstrated a lack of resilience and backup capacity in the nation’s grid.

The Sewer and Water Board of New Orleans said it had lost power and was relying on its own generators to try to keep pumps working to drain storm water out of the city and bring drinking water in.

But it said many or all of its 84 sewage pumping stations were also without power. The agency said late Sunday it was trying to determine whether backup power could be available.

All told, more than a million customers were without power in Louisiana Monday morning, including 176,000 in Orleans Parish. At least 888,000 of them are Entergy customers, the company’s chief executive, Deanna Rodriguez, said.

In Mississippi, more than 104,000 customers are without power, a figure that could grow as the storm churns across the state northward. Nearly 40,000 of those customers get service from Entergy. Another 18,000 customers of Coast EPA in Hancock, Harrison and Pearl River counties also do not have service.

“We’re doing all we can to minimize the amount of time it’s going to take to get power back up for everyone in the region,” President Biden said Monday afternoon.

He said that the Federal Emergency Management Agency had deployed more than 200 generators to Louisiana, and was expecting to send more. The Federal Aviation Administration will issue quick permits for surveillance drones to assess damage to electrical equipment, Biden said, and the Federal Communications Commission is making it possible for cell phone owners to use any carrier’s signal, as a number of cell towers were knocked out.

Louisiana Gov. John Bel Edwards said the state was trying to ensure that power is first restored to hospitals, since generators they are relying on can be expected eventually to fail.

Electrical crews likely won’t know where to begin their work putting much of the city back on line until midweek, said Rodney Wallis, an organizer with the New Orleans-based International Brotherhood of Electrical Workers Local 130. 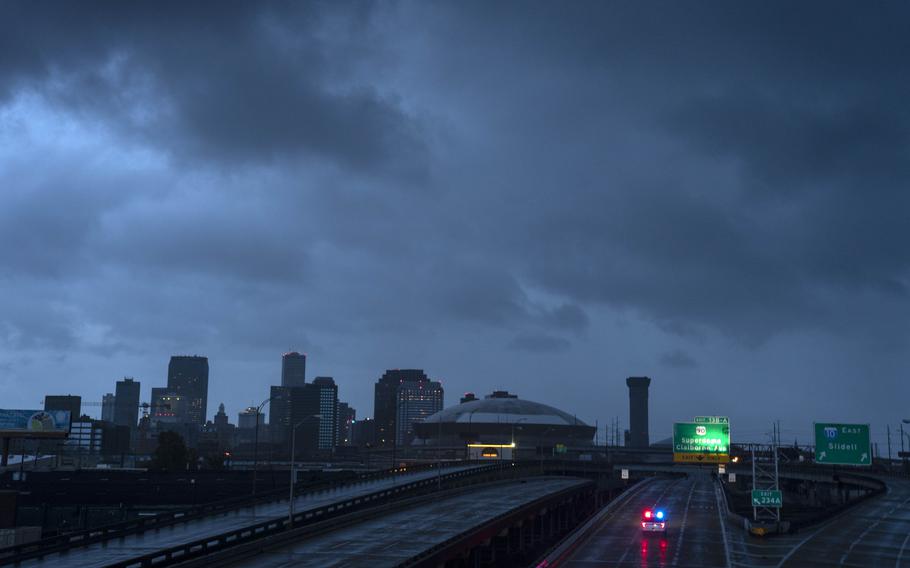 The downtown skyline is largely shrouded in darkness during the dawn as the electricity throughout Orleans Parish has failed after Hurricane Ida pummeled the area. (Michael Robinson Chavez/The Washington Post)

Linemen out of Baton Rouge are largely responsible for restoring downed power lines and repairing transmission towers. New Orleans crews are charged with fixing damaged buildings and restoring power to critical infrastructure, such as the city’s hospitals and sewer and water systems — both of which operated on limited generator power on Monday.

But the Local 130 will likely have to organize that work elsewhere; its office does not have electricity and Wallis said officials were already seeking to relocate operations and begin assembling repair teams. Workers themselves are, he said, are just starting to venture out and assess their own homes and energy needs.

“I was telling my wife earlier, ‘we’ll probably have to drive to Mississippi to get gas,’” Wallis said as he surveyed damage in his sister-in-law’s neighborhood. “The storms are getting stronger, they’re definitely getting stronger, and it seems like they’re coming more often.”

In the St. Roch neighborhood of New Orleans, a few blocks north of the Mississippi River, people are about evenly divided between trying to get out and hunkering down for a long haul without power.

Erica Chomsky-Adelson, director of Culture Aid NOLA, a nonprofit that was formed at the beginning of the pandemic to feed people who lost work because of the lockdown, is staying. She and dozens of volunteers were out early Monday collecting food from restaurant and hotel kitchens’ powerless refrigerators, aiming to cook it quickly and get it out to people stuck in their homes and in shelters.

By afternoon, she expected to have hundreds of sandwiches made and delivered to a school where another nonprofit, El Pueblo NOLA, had gathered more than 60 families of undocumented immigrants who had no safe place to stay on their own.

“There’s a real split, stay or leave,” Chomsky-Adelson said. “A lot of people are concerned about, ‘If I leave, how do I know if I can ever get back?’”

The authorities did not attempt to empty the city of its residents, as they tried with Katrina in 2005. Still, many in New Orleans remain harshly scarred by the Katrina disaster, and they spent much of the weekend preparing go-bags, sorting through belongings to find the must-take family photos and documents.

In the end, “the storm jogged a bit and sat on top of us as a Cat 3, with all the winds and all the rain,” Chomsky-Adelson said, and by the time the power went, most of those who stayed saw no way out. She hunkered down with “lots of batteries and a backpack solar panel,” but no generator, no air-conditioning.

Food, she said, is unlikely to be a problem for the first week or so, as “every restaurant and hotel is clearing out their fridges. We are going to cook,” she promised, as teams of volunteers moved through the city collecting foodstuffs before they went bad.

Without power, many people had no reliable source of information — no internet, no TV, some had battery-powered radios.

The city’s 911 system went down a couple of times and New Orleans officials recommended that people in need of police assistance flag down a passing squad car.

“The world has changed in the last 16 years,” Chomsky-Adelson said. “No one’s got a landline anymore. That’s not great for people who are quickly going to become afraid and lonely.”

Valerie Vides, of the Carrollton-Riverbend neighborhood in New Orleans, said in an email that she was most worried about the nearby sewer and water pumping station.

“We heard the generators stop and the backup ones kick on, which is the sweetest sound in the world when it’s raining in New Orleans,” she said. “Losing power to the sewage pumps with no backup is the biggest concern since what goes down the drain is at risk of not staying there.”

In neighboring Jefferson Parish, “We have no electricity, no communication — our water systems are down, we’re losing pressure,” said Parish President Cynthia Lee Sheng. She said that sewers are backing up and urged residents who had left the parish not to come back for now.

“It’s going to be a difficult life for quite some time,” she said.

The failure of the transmission lines feeding Orleans, Jefferson, St. Bernard and Plaquemines parishes, as well as parts of St. Charles and Terrebonne parishes, comes as the nation is grappling with a stressed and over burdened electrical grid. In Texas, the grid was pushed over the edge by frigid weather; in California by sweltering temperatures. Now, on Sunday, high winds have done the damage.

The Biden administration’s infrastructure bill, as passed by the Senate and awaiting a House vote, includes about $10 billion to $12 billion for transmission lines, out of about $73 billion for a “clean energy” grid.

But the focus has been on improving the delivery of power over long distances; a local catastrophe like the one in New Orleans is a different issue. Some advocates say that particularly in urban areas electric power lines should be buried underground as a means of protection.

As market forces have driven utilities and power providers to seek economies, resilience and redundancy have suffered. That has meant lower costs for consumers but greater risk of serious disruption when things go wrong. Last May the Colonial Pipeline system, stretching from the Gulf Coast to New Jersey, shut down for six days because of a cyberattack; with no backup, it meant that cities in the interior South such as Atlanta and Charlotte were hit with widespread gasoline shortages and panic buying.

In 2008, when Hurricane Gustav hit Louisiana, 13 of 14 transmission lines feeding New Orleans were knocked out of service. Since then, the number of lines has been reduced almost in half, and none were able to stay in operation.

Even after the transmission lines are repaired, Entergy must still restore the local wires that feed homes and businesses, also knocked down by the hurricane.