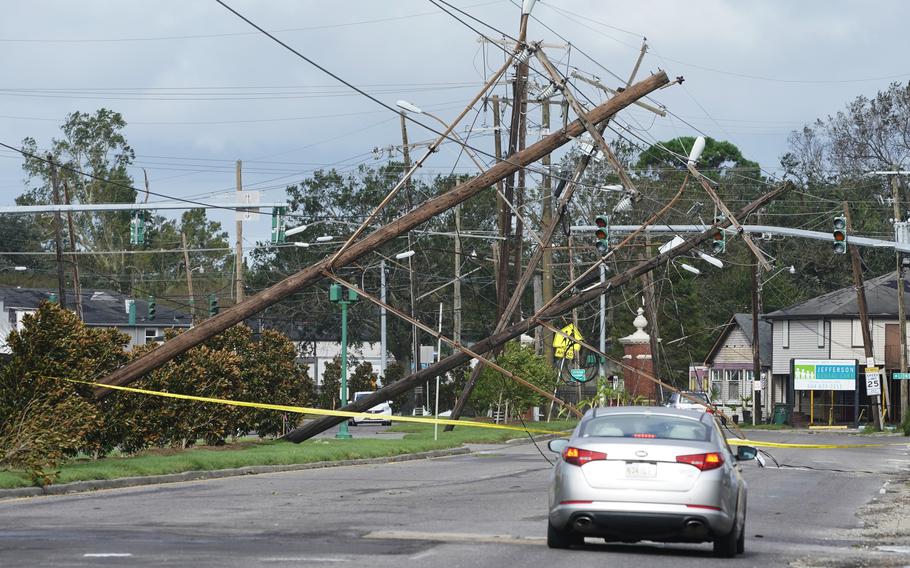 NEW ORLEANS — Louisiana communities beginning the huge task of clearing debris and repairing the damage inflicted by Hurricane Ida are facing the dispiriting prospect of weeks without electricity in the oppressive, late-summer heat.

Ida ravaged the region's power grid, leaving all of New Orleans and hundreds of thousands of other Louisiana residents in the dark with no clear timeline on when the electricity would come back on. Some areas outside New Orleans also suffered major flooding and damage to homes and businesses. 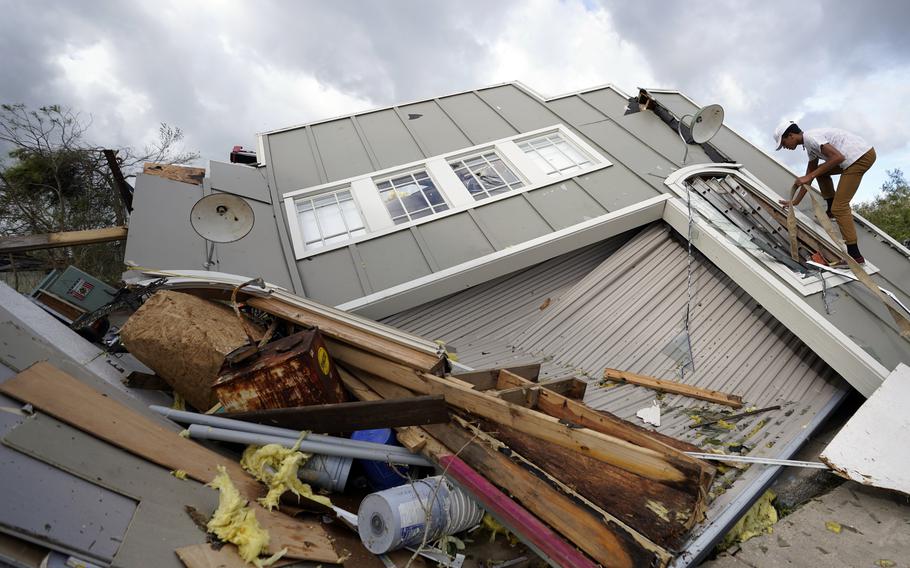 Jeremy Hodges climbs up the side of his family's destroyed storage unit in the aftermath of Hurricane Ida, Monday, Aug. 30, 2021, in Houma, La. (David J. Phillip/AP) 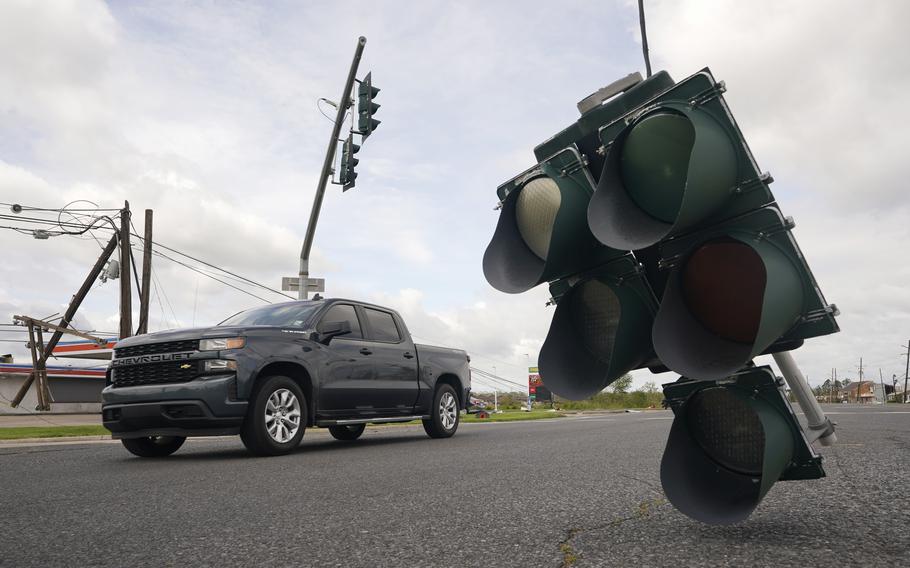 Traffic passes by a traffic light hanging from a cable after Hurricane Ida moved through Monday, Aug. 30, 2021, in LaPlace, La. (Steve Helber/AP) 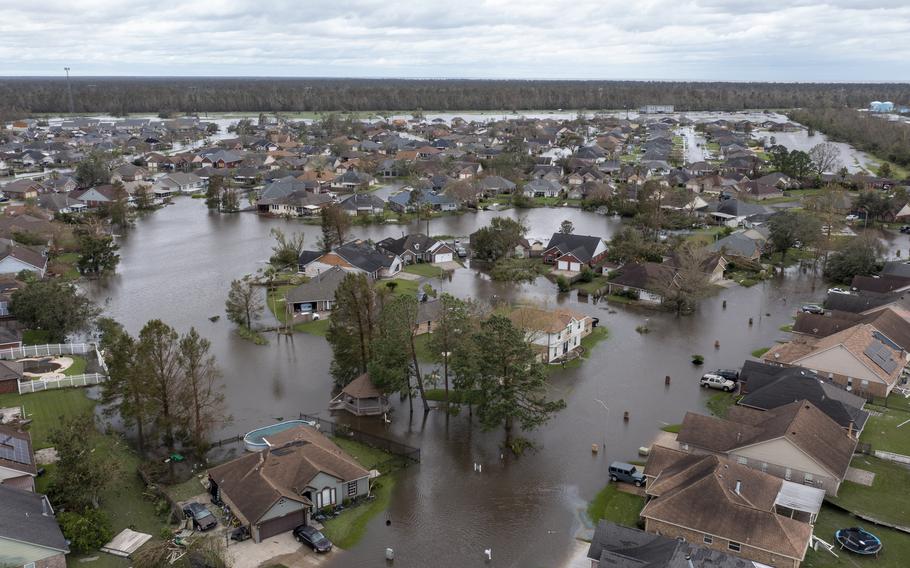 Flooded streets and homes are shown in the Spring Meadow subdivision in LaPlace, La., after Hurricane Ida moved through Monday, Aug. 30, 2021. Hard-hit LaPlace is squeezed between the Mississippi River and Lake Pontchartrain. (Steve HelberAP) 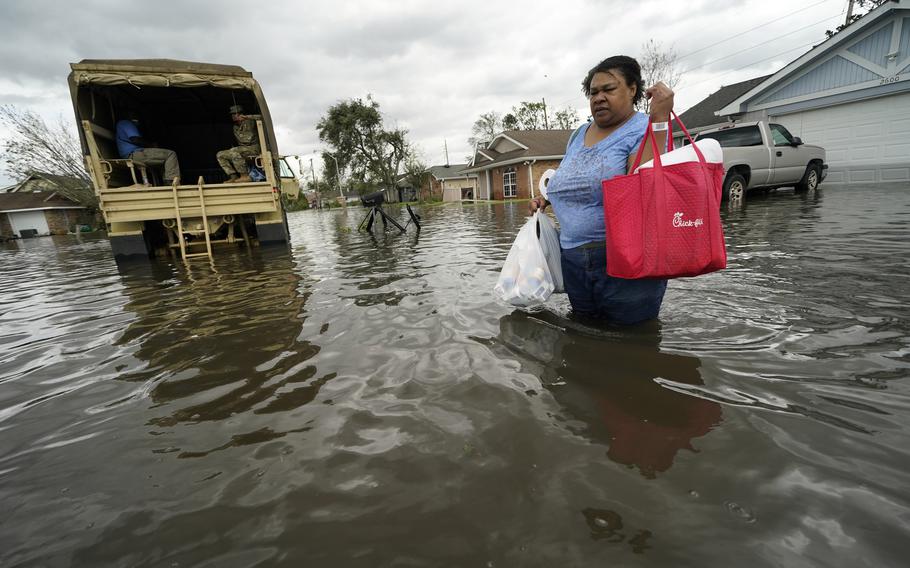 Jerilyn Collins returns to her destroyed home with the assistance of a Louisiana National Guard high-water vehicle to retrieve medicine for herself and her father, and a few possessions, after she evacuated from rising floodwater in the aftermath of Hurricane Ida in LaPlace, La., Monday, Aug. 30, 2021. (Gerald Herbert/AP)

The storm was blamed for at least four deaths in Louisiana and Mississippi, including two people killed Monday night when seven vehicles plunged into a 20-foot-deep hole near Lucedale, Mississippi, where a highway had collapsed after torrential rains.

On Monday, rescuers in boats, helicopters and high-water trucks brought more than 670 people in Louisiana trapped by floodwaters to safety. An additional 20 people were rescued in Mississippi. Crews planned to go door to door in hard-hit areas to make sure everyone got out safely.

Also stuck in New Orleans were tourists who didn't get out before the storm. The airport canceled all incoming and outgoing commercial flights for a third day, saying the lack of power and water meant no air conditioning or restrooms.

Adding to the misery was the steamy weather. A heat advisory was issued for New Orleans and the rest of the region, with forecasters saying the combination of high temperatures and humidity could make it feel like 105 degrees Fahrenheit on Tuesday and 106 on Wednesday.

Power crews rushed into the region. Louisiana's governor said 25,000 utility workers were on the ground in the state to help restore electricity, with more on the way.

Still, his office described damage to the power grid as "catastrophic," and power officials said it could be weeks before electricity is restored in some spots.

More than 1 million homes and businesses in Louisiana and Mississippi were left without power as Ida pushed through on Sunday with winds that reached 150 mph (240 kph). The wind speed tied it for the fifth-strongest hurricane ever to hit the mainland.

A giant tower that carries key transmission lines over the Mississippi River to the New Orleans area twisted and collapsed in the storm, and power company Entergy said more than 2,000 miles of transmission lines were knocked out of service along with 216 substations. The storm also flattened utility poles, toppled trees onto power lines and caused transformers to explode. Surveying the damage for the first time, Sharon Orlando tries to hold back tears on the morning after Hurricane Ida hit her Destrehan, La., home on Monday, Aug. 30, 2021. (Chris Granger/The Times-Picayune/The New Orleans Advocate via AP) 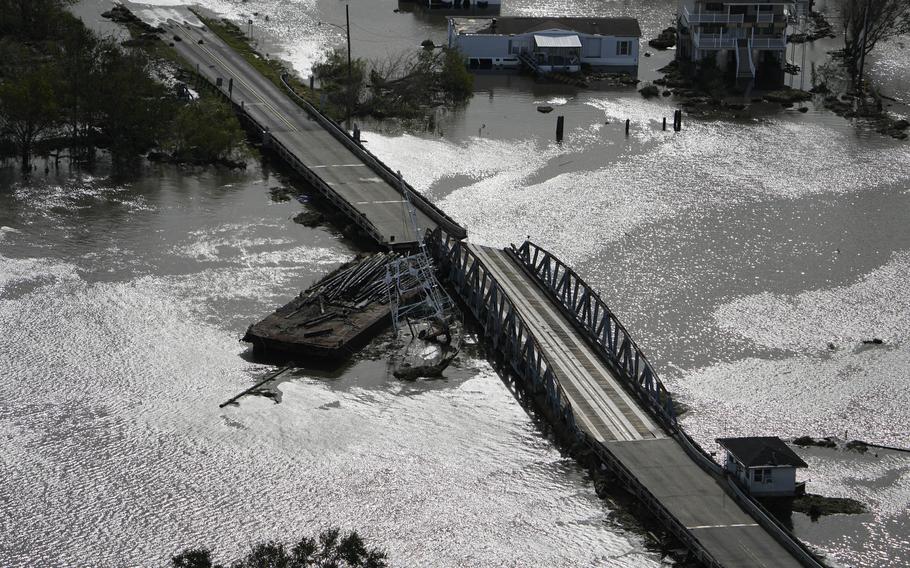 A barge damages a bridge that divides Lafitte, La., and Jean Lafitte, in the aftermath of Hurricane Ida, Monday, Aug. 30, 2021, in Lafitte, La. (David J. Phillip/AP) 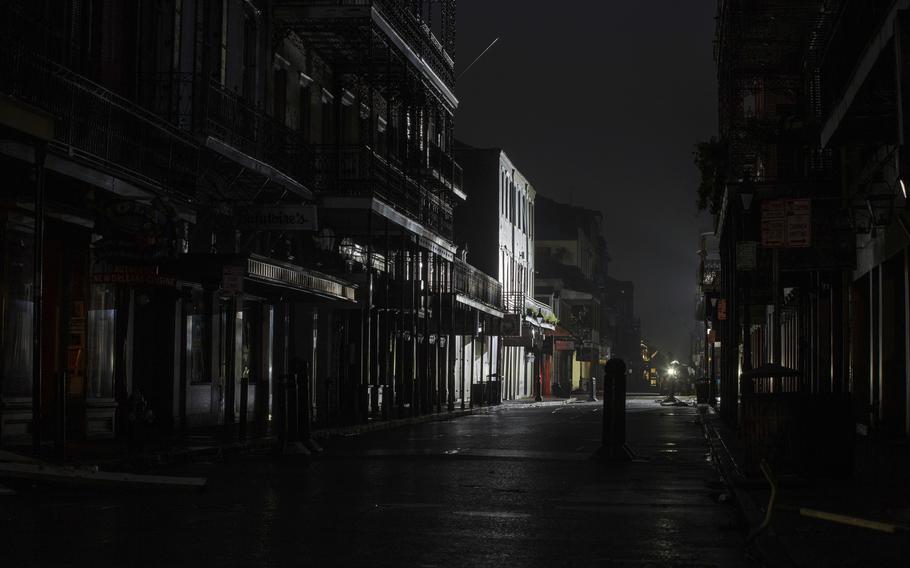 Bourbon Street in the New Orleans French Quarter is dark except for lights used during a TV broadcast Monday, Aug. 30, 2021, after New Orleans lost power during Hurricane Ida. (David Grunfeld/The Advocate via AP)

In New Orleans, city officials told residents without power there was no reason to stay or return, at least for a few days.

Pamela Mitchell said she was thinking about leaving while she waited for the power to come back on, but her 14-year-old daughter, Michelle, was determined to stay and decided to clean out the refrigerator and put perishables in an ice chest.

Mitchell had already spent a hot and frightening night at home while Ida's winds shrieked, and she thought the family could tough it out.

"We went a week before, with Zeta," she said, recalling an outage during the hurricane that hit the city last fall.

Hank Fanberg said both of his neighbors had offered him access to their generators. He also had a plan for food: "I have a gas grill and charcoal grill."

Some places are also facing shortages of drinking water. Eighteen water systems were out, affecting more than 312,000 people, and an additional 14 systems serving 329,000 people were under boil-water advisories, the governor said.

Hurricane Ida blew ashore on the 16th anniversary of Katrina, the 2005 storm that breached New Orleans' levees, devastated the city and was blamed for 1,800 deaths.

This time, New Orleans, protected by a major overhaul of its levees since Katrina, escaped the catastrophic flooding some had feared.

In Mississippi's southwestern corner, entire neighborhoods were surrounded by floodwaters, and many roads were impassable. Several tornadoes were reported, including a suspected twister in Saraland, Alabama, that ripped part of the roof off a motel and flipped an 18-wheeler, injuring the driver.

Ida's remnants continued to bring heavy rain and flooding to parts of the Tennessee and Ohio valleys. Flash flooding and mudslides were possible around Washington on Thursday and in New England on Friday.