US leaders move to shut down further freelance trips to Kabul 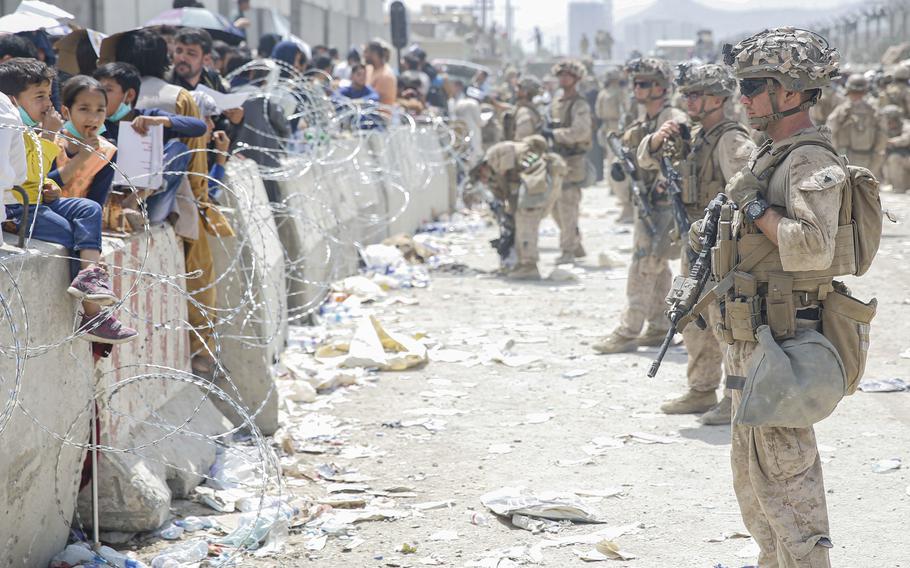 WASHINGTON — Leaders in the Biden administration and on Capitol Hill took steps Wednesday to discourage members of Congress from taking further unauthorized trips to Kabul, delivering sharp rebukes to a pair of lawmakers who made such a journey this week and warning others not to follow.

Defense Secretary Lloyd Austin privately made it “clear” he would approve no “VIP visits” to the Kabul airport, the epicenter of a massive evacuation effort, according to a defense official who requested anonymity to discuss internal communications.

The moves came in response to Tuesday’s visit to the evacuation by Reps. Seth Moulton, D-Mass., and Peter Meijer, R-Mich., a pair of Iraq War veterans who have pressed President Joe Biden to move faster to help vulnerable Afghans.

The statements came as two other lawmakers were heading toward Afghanistan on Wednesday, according to a Biden administration official who was not authorized to discuss their plans. The official said the House members, whose names could not be confirmed, were in Europe and had requested passage to Afghanistan. The Pentagon rejected the request, the official said.

Moulton and Meijer’s visit Tuesday was first reported by The Washington Post, setting off a wave of criticism of the lawmakers for making a freelance excursion that they kept secret from military leaders who were trying to manage a massive, potentially lifesaving operation.

The congressmen were only in Kabul for hours, leaving on a flight used for evacuating Americans and Afghans. But it was enough to prompt officials to vigorously warn anyone else who might be considering such a trip.

“We don’t want anybody to think that this was a good idea and that they should try to follow suit,” House Speaker Nancy Pelosi, D-Calif., told reporters Wednesday.

House Minority Leader Kevin McCarthy, R-Calif., agreed. “I don’t think it’s smart for others to go,” he said. “You’re putting yourself — not just yourself, but you’re putting Americans —- in harm’s way, if the military has to protect you, which they will do.”

McCarthy said he has given explicit advice to others considering the trip: “I explained to them that I don’t think they should.”

The Moulton-Meijer trip added a striking new twist to what was already a volatile situation. Biden’s decision to end a 20-year war in Afghanistan, followed by the country’s rapid fall to the Taliban, has triggered a massive evacuation effort with consequences that will probably play out for years.

Even traditionally circumspect officials made little secret Wednesday of their frustration that the two lawmakers had thrust themselves into such a landscape.

“We obviously are not encouraging VIP visits to a very tense, dangerous and dynamic situation at the airport,” Defense Department spokesman John Kirby said.

Moulton and Meijer had initially traveled from the United States to Qatar via a commercial flight that they paid for, according to Tim Biba, a spokesman for Moulton. From there they “figured out a way onto an empty military flight going into Kabul,” Biba said.

Moulton’s office provided few other specifics about that, other than to say it was an allied military plane.

One official said the administration had received “troubling reports” that the pair “were not honest about their identities on the manifest on the aircraft.” The official spoke on the condition of anonymity because the person was not authorized to discuss the details of the lawmakers’ travel.

Moulton played down that account but did not deny it.

“If that happened, I was unaware,” said Moulton via a text message from his spokesman. “I told the crew who I was.”

Reached by cellphone, Meijer denied using a fake name and said he had no knowledge of how manifests worked.

In any case, the lawmakers arrived in Kabul at about 4 a.m. D.C. time on Tuesday and left around 7:30 that night, Biba said.

During their brief time at the airport, the pair met with service members, diplomats and civilians, all of whom were scrambling to evacuate thousands of Americans, U.S. allies and vulnerable Afghans by Biden’s Aug. 31 deadline.

“Witnessing our young Marines and soldiers at the gates, navigating a confluence of humanity as raw and visceral as the world has ever seen, was indescribable,” Moulton said in a post on social media.

He said the trip was made “in secret” to “reduce risks and impact on the mission.”

The pair were flown out of Kabul via a military plane that included evacuees. Moulton said the lawmakers “insisted on leaving in a plane that was not full, in a seat designated for crew, so that we didn’t take a seat from someone else.”

And the Massachusetts congressman said that “in the coming days” he and Meijer will have “more to share” about what they’ve learned.

But it is unclear how receptive their colleagues will be. Several spoke angrily about the pair’s decision to show up in the midst of a military operation and put additional strain on the armed forces.

“Neither one of them should have their ass in Afghanistan right now,” said Rep. Mike D. Rogers (Ala.), the top Republican on the House Armed Services Committee. “The Defense Department has enough to do without having to try to protect two members of Congress. Period.”

He added that the Pentagon’s resources are stretched thin in Afghanistan as it is.

“The last thing that the Defense Department needs is to defend two members of Congress,” Rogers said. “I cannot believe those two very fine men went over there and did that to this country.”

Rep. Adam Smith, D-Wash., chairman of the Armed Services committee, was a bit more restrained. “It does complicate what they’re doing,” Smith said.

Pelosi said congressional delegations abroad generally need approval from the relevant committee chairs and ranking members, and no such approval was granted to the two lawmakers, both of whom are combat veterans.

“We’ve put out the word to committee chairs,” Pelosi said Wednesday. “There aren’t going to be any planes or this or that for people going to the region, or any facilitation.”

The House was in session while the lawmakers were on their trip, so neither was present for votes on several matters, including Biden’s $3.5 trillion budget blueprint. Both invoked a coronavirus-era rule allowing other House members to cast proxy votes on their behalf.

Moulton tapped Rep. Jim McGovern, D-Mass. But McGovern was told that Moulton would be in Massachusetts and had no idea that he was standing in so his colleague could travel to Kabul, according to a person familiar with the exchange.

Meijer had Rep. Blake D. Moore, R-Utah, cast a proxy vote. Moore’s office did not respond to a request for comment.

Austin was among those who were not aware of the lawmakers’ plans, according to Kirby, his spokesman. “The secretary would have appreciated the opportunity to have had a conversation before the visit took place,” Kirby said. “They certainly took time away from what we had been planning to do that day.”

White House press secretary Jen Psaki said that the White House was also in the dark about the trip.

“This is not the time to travel to Afghanistan,” she said during the daily White House news briefing. “Our focus, our objectives, our resources need to be laser-focused on evacuating Afghan partners, evacuating American citizens.”

McCarthy, however, said he does empathize with the pent-up ire that may have prompted the trip.

“It’s not the best idea to go there, but I understand their frustration,” McCarthy said. He blamed the Biden administration for not providing enough information on the evacuation, suggesting that this lack of transparency prompted the trip.

Some rank-and-file lawmakers with military backgrounds also defended Moulton and Meijer’s actions based on what they consider a general lack of information about the situation in Kabul.

“Well, I wouldn’t have done it, but I understand the frustration,” said Rep. Mike Waltz, R-Fla., who served in the Army. “This is very personal for many of us, the level of frustration for the lack of information we’re getting.”

Rep. Chrissy Houlahan, D-Pa., an Air Force veteran, agreed that lawmakers are not getting a full picture. “That’s almost my exact experience,” she said.

But Pelosi dismissed any such explanation of Moulton and Meijer’s motivations.

“They wanted to freelance on their own,” she said. “I would not make anything bigger of this.”