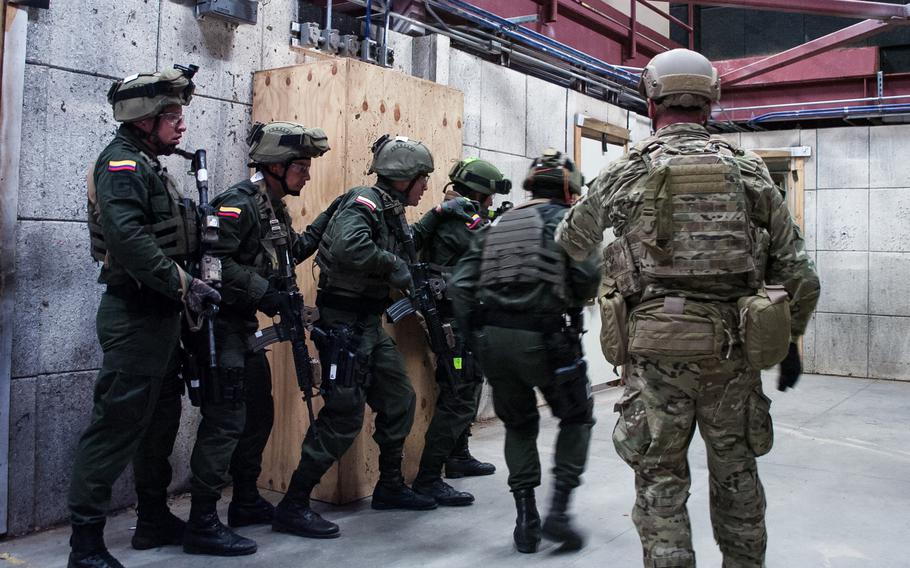 A U.S. Special Forces soldier observes elite Colombian troops during training at Eglin Air Force Base in Florida in 2015. The two militaries have a partnership dating back decades. (U.S. Defense Department)

Some of the former Colombian servicemen arrested after last week's assassination of Haiti's president previously received U.S. military training, according to the Pentagon, raising fresh questions about the United States' ties to Jovenel Moïse's death.

"A review of our training databases indicates that a small number of the Colombian individuals detained as part of this investigation had participated in past U.S. military training and education programs, while serving as active members of the Colombian Military Forces," Lt. Col. Ken Hoffman, a Pentagon spokesman, said in a statement to The Washington Post.

The Pentagon's review is ongoing, Hoffman said. He did not say how many of the men received training or precisely what it entailed.

"This illustrates that while we want our training of foreign armies to build professionalism and respect for human rights, the training is only as good as the institution itself," he said.

"The Colombian army, which we have supported for 20 years, has a long history of targeting civilians, violating the laws of war and not being accountable. There has been a cultural problem within that institution."

Colombian officials have said 13 of the 15 Colombian suspects in the July 7 assassination plot once served in that country's military, including the two killed by Haitian authorities after Moïse was fatally shot inside his home.

It is common for Colombian troops and other security personnel across Latin America to receive U.S. training and education. Colombia, in particular, has been a significant U.S. military partner for decades, receiving billions of U.S. dollars since 2000 in its effort to battle drug trafficking organizations, leftist guerrillas and far-right paramilitary groups.

That effort has included CIA-backed missions and a close relationship between Colombia military personnel and the Green Berets, who help train their elite counterparts in guerrilla warfare. A Colombian commando school is modeled on the Army's grueling Ranger School, and the two militaries' partnership dates at least to the 1950s.

Colombian military and police also use U.S.-provided weapons and equipment, an agreement that came under scrutiny earlier this year after police there killed multiple protesters during demonstrations against government tax proposals. A related analysis by The Post, published in May, found that Colombian authorities overstepped their own rules of engagement in some of the deadly encounters.

Fighting in Colombia's decades-long war has been a springboard for military veterans to trade their U.S.-funded experience for hire in other global conflicts, such as in Yemen.

"The recruitment of Colombian soldiers to go to other parts of the world as mercenaries is an issue that has existed for a long time, because there is no law that prohibits it," the commander of Colombia's Armed Forces, Gen. Luis Fernando Navarro, told reporters last week.

Foreign military training provided by the United States is intended to promote "respect for human rights, compliance with the rule of law, and militaries subordinate to democratically elected civilian leadership," Hoffman, the Pentagon spokesman, said in his statement. He did not immediately respond to questions seeking additional information.

The disclosure that some of the assassination suspects received U.S. training, which has not been previously reported, is certain to complicate the already murky understanding of how the plot to kill Moïse took shape, and who was involved.

Two U.S. citizens of Haitian descent are among those who've been arrested, and Haitian authorities have said a Florida-based security company was involved in purchasing plane tickets for the Colombian suspects to fly from Bogota to the Dominican Republic, according to a report published this week by the Associated Press, which noted authorities have offered scant evidence.

Christian Emmanuel Sanon, 63, an American doctor and pastor who frequently traveled between Haiti and Florida, was arrested in connection to the plot. Authorities have claimed he was positioning himself to run for president in the impoverished Caribbean nation and had a role in hiring the alleged assassins, but they have provided little evidence about his alleged involvement.

To date, Haitian authorities have arrested at least 20 people in connection with Moïse's death, which has plunged the country into a leadership crisis. Late Wednesday officials confirmed they had detained the presidential palace's head of security.

Authorities in Haiti are investigating Moïse's killing with assistance from the FBI, the Department of Homeland Security officials and personnel from Colombia's government. President Biden has condemned the assassination and appealed for calm, but his administration has rebuffed requests from Haiti's government for American military assistance to help shore up security.