US citizen among suspects arrested in assassination of Haitian president, senior official says

PORT-AU-PRINCE, Haiti — A U.S. citizen of Haitian descent has been arrested in connection with the assassination of Haitian President Jovenel Moïse, a senior official here said Thursday.

James Solages, a U.S. citizen, is among the six people arrested so far in Moïse's killing, according to Mathias Pierre, Haiti's minister of elections and inter-party relations. Pierre told The Washington Post that at least one other detainee is also believed to be a Haitian American. Four other suspects have been killed, authorities have said.

The assassination of Moïse early Wednesday has deepened the spiraling political crisis in this impoverished Caribbean nation.

Authorities have not yet provided evidence of the detainees' alleged involvement in the assassination.

Pierre shared a video of two suspects being apprehended and jeered by a surrounding crowd. He said the detainees were being held at a police station in the capital that had been surrounded by an angry mob.

"The special units are trying to protect the police station, because the population is very mad and is trying to get to them, to burn them," he said. "We're trying to avoid that."

Authorities have not released the names of the other detainees, but Haitian Communications Minister Pradel Henriquez has described them as "foreigners."

The motivation for the assassination remains unclear. The country has endured rising violence during a months-long political stalemate. Moïse, a businessman who took office in 2017, ruled by decree after parliament was dissolved in January 2020; opponents and protesters demanded that he step down. Armed gangs with unclear allegiances have seized control of growing portions of the country, terrorizing the population with kidnappings, rapes and killings.

"He had obviously many enemies," said Robert Fatton, a professor of government and foreign affairs at the University of Virginia who has written extensively on Haiti. "There might have been some degree of complicity on the part of those protecting the president."

Also unclear is who is now in charge of Haiti. Moïse had been due to install Ariel Henry, a neurologist, as prime minister on Wednesday to replace acting Prime Minister Claude Joseph — the latest in a revolving door of prime ministers.

It was Joseph who announced Moïse's killing on Wednesday morning; he said he was now the head of Haiti's government. But in an interview with the Associated Press, Henry appeared to contradict Joseph. "It's an exceptional situation. There is a bit of confusion," he said. "I am the prime minister in office."

The leadership vacuum is a potential powder keg in a nation grappling with deepening economic, political and social woes, with gang violence spiking in the capital Port-au-Prince, inflation spiraling, and food and fuel becoming scarcer in a country where 60 percent of the population makes less than $2 a day.

"The past 30 years have been one calamity after another, and now it is getting more serious," Fatton said. "We have two individuals vying for the position of prime minister. The economy is in terrible shape. The covid situation is deteriorating. No one is vaccinated. And then you have the security situation. The police are completely fragmented, and some members of gangs are former police officers."

The Supreme Court's chief justice, who might be expected to help provide stability in a crisis, died recently of COVID-19.

Fatton said Haiti — which was subject to a controversial U.N. stabilization mission between 2004 and 2017 — could face another such intervention if the security situation worsens after the president's murder.

The U.N Security Council condemned the assassination on Wednesday and called on all parties to "remain calm, exercise restraint and to avoid any act that could contribute to further instability."

In a statement, the 15-member council "made an emphatic call on all political stakeholders in Haiti to refrain from any acts of violence and any incitement to violence." It also called for the perpetrators to be brought to justice.

The council is due to be briefed on Moïse's assassination in a closed-door meeting on Thursday.

World leaders were quick to condemn the assassination on Wednesday. President Joe Biden said he was "shocked and saddened to hear of the horrific assassination" and condemned "this heinous act."

Despite the turmoil, State Department spokesman Ned Price said it was still the view of the United States that elections this year should proceed. Moïse had been ruling by decree for more than a year after failing to hold elections, and the opposition demanded he step down in recent months, saying he was leading it toward yet another grim period of authoritarianism.

Jake Johnston, a Haiti specialist from the Center for Economic and Policy Research think tank, called for patience from the international community, saying a push for new elections in the current state of turmoil was an "extremely dangerous game."

Rather than going through with rushed elections, Haitian civil society organizations before Moïse's assassination had proposed a negotiated departure for the president and his replacement through a nonpartisan transitional government that could undertake needed reforms and eventually oversee a secure and credible transition back to democracy. The Biden administration, the U.N. Security Council and the Organization of American States had all rejected this path forward.

"There's multiple crises happening here. There's a massive food crisis. Hurricane season is approaching. The economic crisis is deepening," said Johnston. "Rather than trying to rush in and solve the situation, international actors should exercise some patience."

The assassination could pose another big test for the Biden administration, observers said, if it fans a wave of Haitian immigration.

Gang violence and the coronavirus outbreak are both worsening. A shooting rampage in the streets of Port-au-Prince last week left at least 15 people dead. At least 278 Haitians have been killed this year in attacks that have prompted some citizens to flee the capital, traveling by boat and plane to avoid dangerous, gang-controlled roads. 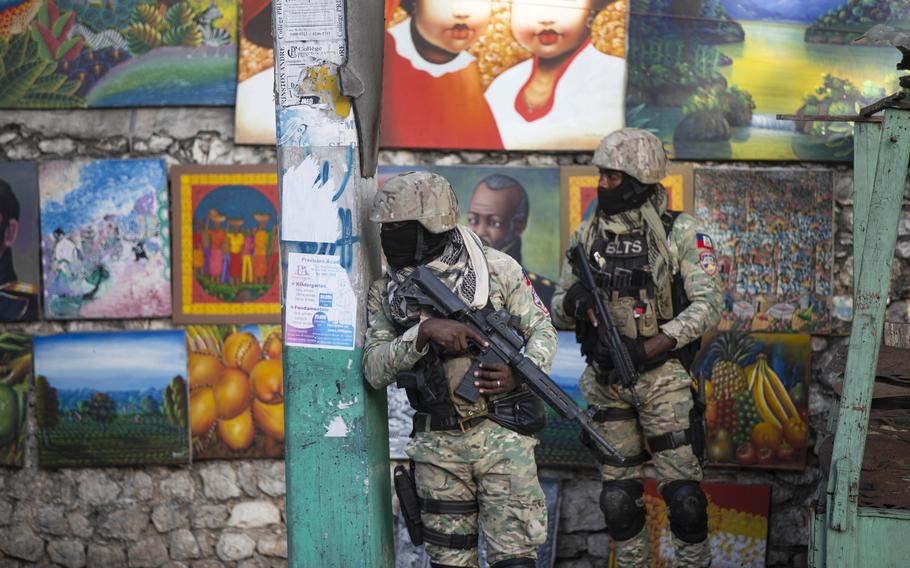