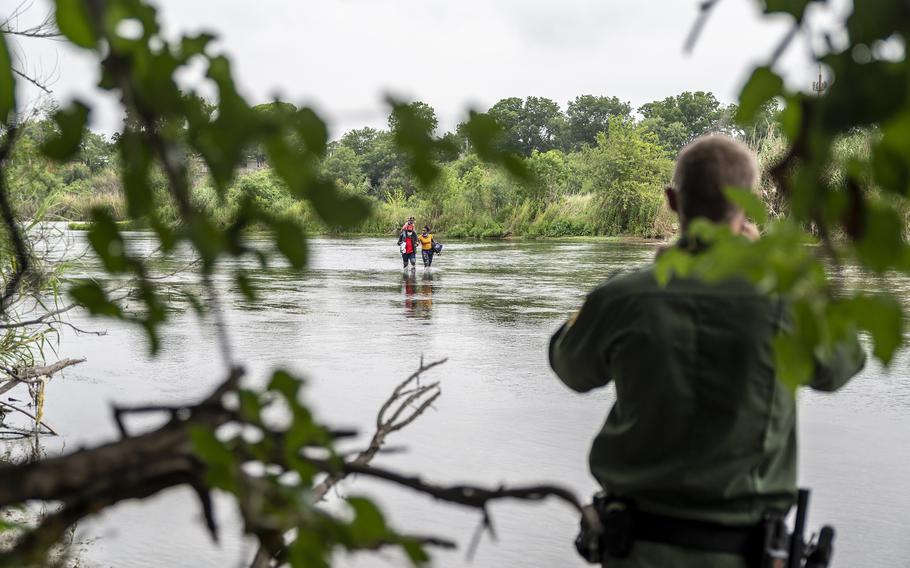 A Border Patrol agent watches a Haitian family approach the U.S. side of the Rio Grande on June 25 in Del Rio, Texas. MUST CREDIT: Photo for The Washington Post by Sergio Flores (Sergio Flores)

For decades, the United States met asylum seekers from Cuba and Haiti with divergent attitudes: for Cubans, open arms, and for Haitians, return tickets.

The countries, the largest by population in the Caribbean, have seen distinct crises in vastly different political contexts. As Cuba faces its largest protests in decades, amid tough economic conditions, Haiti is grappling with the chaotic aftermath of the assassination of its president. But the Biden administration has delivered the people of both countries a uniform message: "Do not risk your life attempting to enter the United States illegally," Homeland Security Secretary Alejandro Mayorkas said during a news conference Tuesday. "You will not come to the United States."

The briefing appeared to be the administration's attempt to get out ahead of what some experts warn could become concurrent Caribbean migration crises.

Even before the latest round of unrest in both countries, data suggests that the number of Haitians and Cubans seeking to migrate to the United States was steadily increasing.

"People have been trying to leave consistently," said Ninaj Raoul, co-founder of the New York-based charity Haitian Women for Refugees.

Large protests over the weekend in Cuba, a one-party authoritarian state for more than six decades, were a "manifestation of the economic desperation and frustration that people are feeling" in the country, said William LeoGrande, a Cuba expert at American University. "It's exactly those feelings that also convince some people that it's time to leave."

Defensive asylum claims by Cubans rose by nearly a factor of 10 from 2017 to 2019, according to Justice Department data.

Meanwhile, as many as 10,000 Haitians are already estimated to be stuck at the U.S.-Mexico border, unable to have their asylum claims heard because of a public health order, Title 42, instated by the Trump administration and kept in place under President Joe Biden.

Historically, Cuban migrants to the United States received a welcome that few others — especially those from Haiti — received. President Donald Trump, who derided Haiti while calling Cuban voters "very good for him," cast into sharp relief the long-standing dynamic.

For critics of the Biden administration, its approach to the situations in Haiti and Cuba illustrate a continuity of many hard-line immigration policies put in place by Trump. But Biden also faces pressure from the right, particularly in Florida.

"The last thing President Biden I'm sure would like to see is Haitian boats showing up in Miami," said Muzaffar Chishti, director of the Migration Policy Institute office at the New York University School of Law. 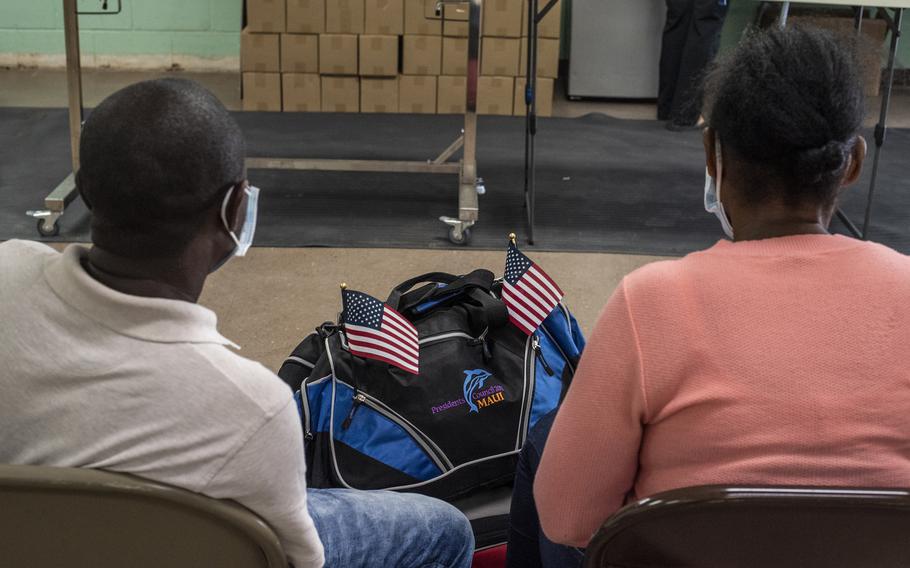 Migrants from Haiti await transportation June 26 at a shelter in Del Rio, Texas. MUST CREDIT: Photo for The Washington Post by Sergio Flores (Sergio Flores)

Sen. Marco Rubio, R-Fla., on Monday raised the specter of previous waves of Cuban refugees who headed to Florida.

In a letter to Biden, he asked the president to "warn the regime that any effort to encourage mass migration will be viewed and treated as a hostile action against the United States."

Haiti is considered the poorest country in the Western Hemisphere. Cuban economic output is far larger, but it has strained for decades under a U.S. trade embargo, diplomatic isolation and mismanagement of its planned economy.

Washington imposed the embargo, along with other restrictions, amid Cold War tensions after the Cuban revolution of 1959, which ousted a U.S.-friendly dictatorship. In the following years, thousands of Cubans fled the country, many reaching Florida by boat.

Haiti's relationship with the United States, meanwhile, was shaped by a U.S. occupation from 1915 to 1934.

In the latter part of the 20th century, the countries both saw waves of people depart for the United States, where they were received differently.

"Compared to other groups, including the Haitians, it's clear that the U.S. government has traditionally given special treatment to Cubans for mostly political reasons," said Jorge Duany, director of the Cuban Research Institute at Florida International University.

The surges in migration have often overlapped, first in 1980, when the arrival of Cubans, considered political refugees, and Haitians, considered economic migrants, led the Carter administration to address the disparity by creating a new category called entrants that allowed both to stay.

In 1994, after a coup in Haiti and economic turmoil in Cuba following the collapse of the Soviet Union, the Clinton administration reopened a base at Guantánamo Bay, Cuba, to serve as a refugee processing center.

However, while the majority of the 30,000 Cubans who made it to the base were eventually resettled in the United States, then-President Bill Clinton pursued a different approach for the Haitians: a U.S. invasion of the country, after which the 20,000 Haitians at Guantánamo were repatriated.

After a devastating 2010 earthquake hit Haiti, many left the country for Brazil, where they often found construction jobs and other work ahead of the 2014 World Cup and the 2016 Rio Olympics.

President Barack Obama sought a "thaw" in relations with Havana, and in 2017 ended the "wet foot, dry foot" policy imposed in 1995 that allowed Cubans fleeing the country to stay if they made it to dry land.

Though the Trump administration reversed many Obama-era policies, it maintained a hands-off approach to the question of migrants and refugees.

After the 2010 earthquake, the Obama administration gave Haitians in the United States temporary protected status that exempted them from deportation for 18 months. The designation was renewed repeatedly.

The Trump administration announced in 2018 that it would end the protection in July 2019, but several lawsuits challenging the move allowed the designation to remain in effect. The Biden administration redesignated TPS for Haitians in May, citing the deteriorating political situation in the country, but only Haitians in the United States at that point are eligible.

The Biden administration has not announced a break with Trump's hard-line Cuba policy, which some commentators attribute to the political influence of Cuban Americans in Florida.

Critics say the continuation of a ban on remittances to Cuba could have contributed to the economic turmoil the country faces.

The U.S. Coast Guard has intercepted about 550 Cubans attempting the sea journey to the United States so far this fiscal year. That's higher than the totals for the past three fiscal years — but down significantly from 2016 and 2017.

A Coast Guard crew intercepted and repatriated 23 Cubans on Saturday after a search-and-rescue mission off Key West, according to a Coast Guard news release.

But most Cubans and Haitians traveling toward the United States did not leave their countries of origin recently, according to Giulia Testa, regional manager for Latin America and the Caribbean at the Mixed Migration Centre. Pandemic-induced economic woes in Brazil prompted many Haitians who had settled there to attempt the journey north.

Most coming from South or Central America undertake the trek to the U.S. land border. Many hope to apply for asylum in the United States. But Cubans and Haitians were also among the top nationalities of people seeking asylum in Mexico, according to the MMC.

Mayorkas, himself a Cuban refugee, expressed the Biden administration's "support for the people of Haiti" and "solidarity with the Cuban people" on Tuesday. But he made clear that his department would stop those seeking to enter the United States illegally, no matter what they were fleeing.

The Washington Post's Sammy Westfall contributed to this report.