15 million people in the US have missed their second dose of the coronavirus vaccine, CDC says

Nearly 15 million people — or more than one in 10 of those eligible in the United States — have missed their second dose of the coronavirus vaccine, according to the Centers for Disease Control and Prevention.

CDC data shows that as of June 16, nearly 11% of people who had sufficient time to get the second dose missed their ideal window. The number has increased from 8% earlier in the year, but CDC spokesperson Kate Fowlie said the rise was “not unexpected.”

Health officials have explained that people — in this case, nearly 15 million people — skip their second shots for a variety of reasons, such as mistakenly believing that they only need one dose to be protected. Some people also want to avoid the sometimes-unpleasant side effects that come with the second dose, and others simply miss their second appointment and can’t or don’t reschedule.

Public health officials also discussed whether one injection could be enough earlier in the pandemic, theorizing that some immunity is better than none, which Broniatowski said might have led to confusion on whether two doses are really needed.

“When you have those sorts of things, people start to rationalize, ‘Well maybe it is not necessary to get that second dose,’ especially when they have other barriers or other concerns,” he said.

But regardless of whether you’re busy or want to avoid feeling under the weather, experts say completing vaccination will be crucial as the highly transmissible delta variant continues its spread.

A United Kingdom study published in May found that the Pfizer vaccine was just 33 percent effective against the variant in preventing symptomatic disease after one dose. After two shots, that number jumped to 88 percent.

“It’s clear how important the second dose is to secure the strongest possible protection against COVID-19 and its variants — and I urge everyone to book in their jab when offered,” former U.K. health and social care secretary Matt Hancock said in a news release about the study.

In rare cases where people have immediate or severe allergic reactions to the first dose, the CDC does not recommend completing that vaccine series. Otherwise, everyone should complete both doses.

People who miss the optimal window for their second dose don’t need to start over, according to the CDC. There’s just less data on how effective the second dose is if administered more than 42 days after the first.

Broniatowski said it’s important for health officials to investigate why people aren’t getting second doses and shift their public messaging as needed to address what they find. He said this will be critical if coronavirus booster shots end up being necessary.

“If the science ends up being that we need booster shots, then we’re going to need to figure out, ‘How do we communicate that?’ “ he said. “I think we can learn a lot right now from looking at the reasons why people who don’t follow up are not following up.” 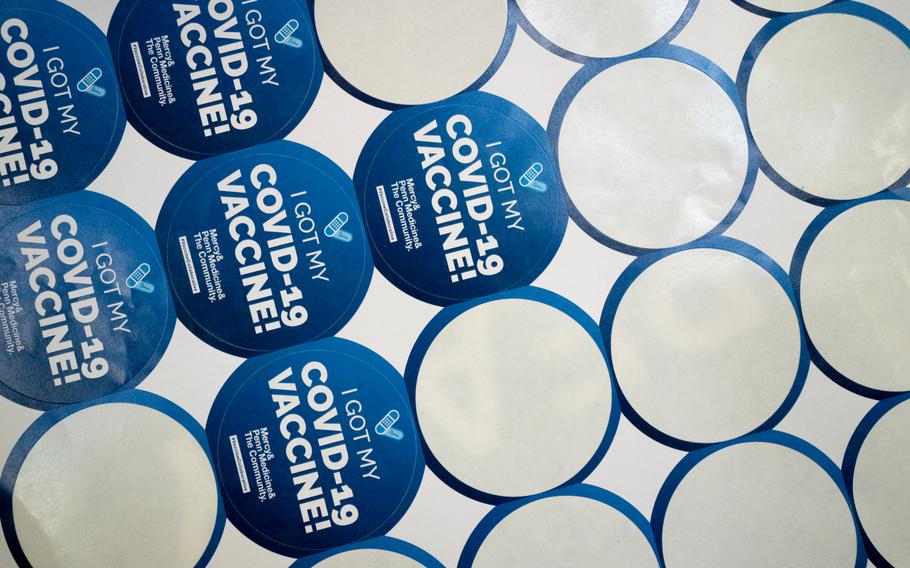 Vaccine stickers at the coronavirus vaccination clinic at the School of the Future in Philadelphia on May 22, 2021. (Caroline Gutman/for The Washington Post)