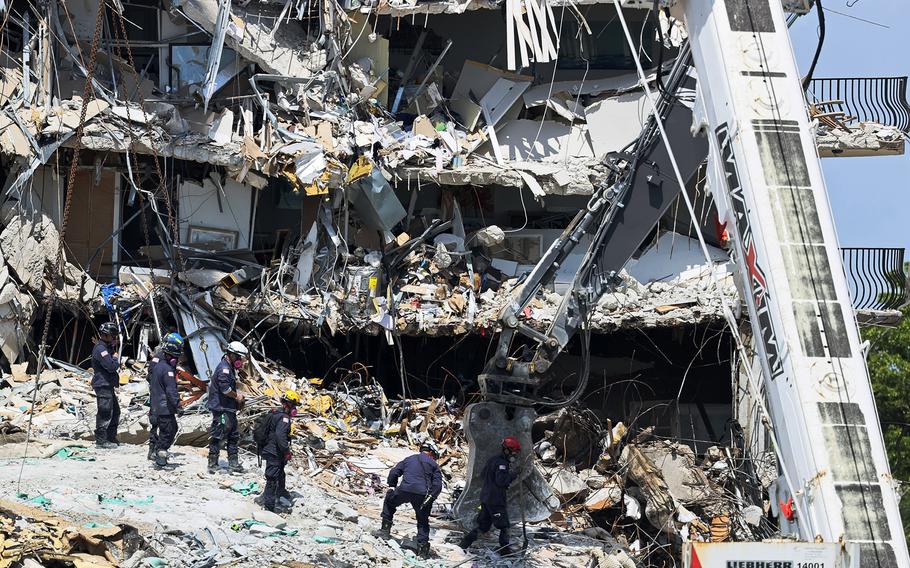 Search and rescue personnel search for survivors through the rubble at the Champlain Towers South Condo in Surfside, Florida, on June 27, 2021. (David Santiago, The Miami Herald/TNS)

WASHINGTON (Tribune News Service) — President Joe Biden will visit Surfside, Fla., on Thursday to thank first responders and meet families of the victims, one week after the collapse of a residential building left at least 11 people dead and 150 missing.

First lady Jill Biden will travel with him to the area near Miami Beach.

“They want to thank the heroic first responders, search and rescue teams, and everyone who’s been working tirelessly around the clock, and meet with the families who have been forced to endure this terrible tragedy, waiting in anguish and heartbreak for word of their loved ones, to offer them comfort as search and rescue efforts continue,” White House press secretary Jen Psaki told reporters on Tuesday.

Psaki added that the president wants to make sure state and local authorities have access to all necessary resources but didn’t say if he will meet with any officials during his trip.

Biden’s visit is also being organized so it doesn’t have any “negative operational impact” on search and rescue efforts, she said.

Biden has received regular updates on the disaster, and over the weekend sent FEMA Administrator Deanne Criswell to tour the rubble of the Champlain Towers with Florida Gov. Ron DeSantis.

“She reiterated that words can’t describe the scene on the ground,” Biden said in a statement after being briefed by Criswell on Sunday.

In a phone call with DeSantis, Biden pledged any federal assistance necessary to help in the search and rescue mission.

More than 50 federal personnel are on the ground to assist in the investigation and search and rescue efforts, including building science experts, structural engineers, geotechnical experts and members of the U.S. Army Corps of Engineers.

The collapse of the Champlain Towers condo building has drawn international attention, as rescuers search for remaining survivors and family members of the missing gather to pray for their safety. Authorities have not yet determined why the building collapsed.

Psaki reiterated that Biden supports an investigation into the disaster in a briefing to reporters aboard Air Force One en route to Wisconsin.

“The National Institute of Standards and Technology, NIST, is authorized to investigate building failures,” she said. “Their authorities are modeled after those of the National Transportation Safety Board, the NTSB, for investigating transportation accidents. They have announced they’ve sent a team of six scientists and engineers to collect first-hand information on the Champlain Towers South collapse that will be used to determine if an investigation or study will be conducted.”

NIST has conducted four investigations over the past 20 years, including a probe into the technical causes of the collapse of the World Trade Center in the Sept. 11 attacks.

“Obviously, that would be something the president would support,” Psaki said of a NIST inquiry, “and certainly we would look to that if that’s a decision made to learn how we could help protect infrastructure across the country.”