The formidable challenges of search and rescue at disaster sites 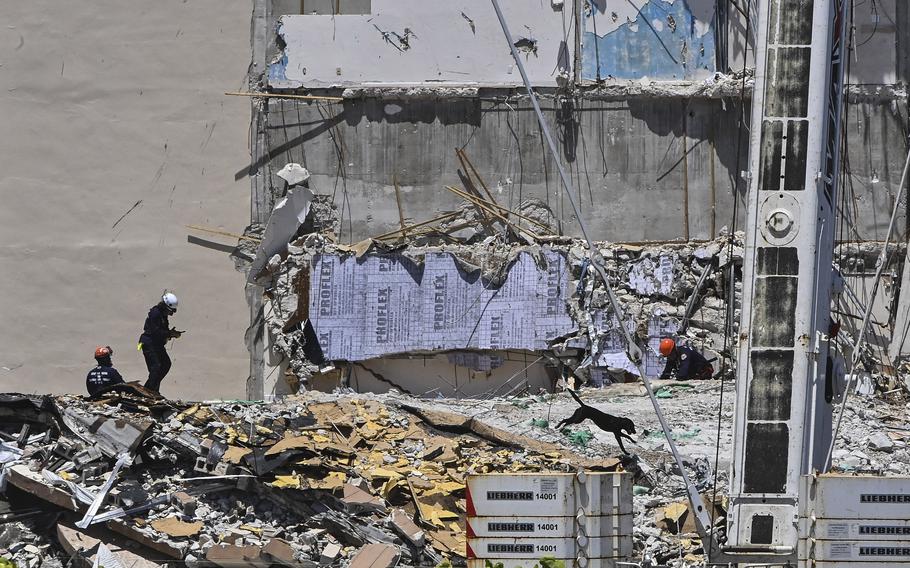 The first responder called out looking for survivors, and he was shocked to hear a response. A woman had been trapped for days in the rubble of a hotel in Haiti that had rumbled to the ground in an earthquake that killed some 250,000 people.

Jeff Lewis, a battalion fire chief with the Fairfax County Fire Department in Virginia, still recalls that day in 2010 often, he said. The woman, eventually extricated at the Hotel Montana in Port-au-Prince, marked a victory in a line of work that mixes devastation with jubilation, with successful rescues cherished for years.

“It’s a very sobering thing,” said Lewis said of finding survivors. “All of us who are in this field consider ourselves lucky, and very much appreciate that we can do it.”

The highly specialized field jumped to the forefront following the collapse last week of Champlain Towers South, a 12-story beachfront condominium building in Surfside, Fla. As of Monday night, authorities had confirmed 11 deaths, with 150 more people unaccounted for and others grappling with the small decisions that kept them away from their home as it disintegrated.

The wicked challenges in the work are often in its unpredictability.

First responders are expected to assess and traverse piles of rubble with unknown hazards lurking, including jagged edges and the possibility of additional cave-ins. Over time, teams mark routes in and out of the disaster area, building shoring with boards and other material to prevent debris from falling.

As the crews work, they deploy an array of working dogs, acoustic sensors, cutting tools, and telescopic cameras in hopes of finding survivors. They wear protective gear that is lighter and allows for more dexterity than traditional firefighting equipment, a function of the tight spaces into which they squeeze.

Fairfax County Fire Chief John Butler said that the two most important things in urban search and rescue are intense training and recognition of potential hazards.

“The reason many people can’t self-extricate is the very same reason we have to take due diligence and intense attention to detail, so that we don’t become a part of the rescue,” Butler said. “When you get into some of these areas you need a plan to mitigate the hazard, and you should also have a plan to get out of it.”

As people are found, they receive medical care on-site as needed, and are carried out depending on their kinds of injuries, Butler said. People who are found dead are treated with “dignity factored in,” with coverings used to provide privacy, he added.

Gregg Favre, the executive director of the regional response system in St. Louis, said rescue teams often must build routes that resemble makeshift mine shafts. The most likely place to find survivors are in “void spaces,” spots in which steel beams, furniture or other heavy-duty material create a pocket that holds up to the onslaught of a building caving in.

Favre, who was trained in urban search and rescue as a St. Louis firefighter, recalled responding to a house fire at a vacant building that collapsed. Firefighters believed that a man without a home occasionally stayed there, and searched for him.

“I was essentially in the basement of the building walking on the roofing materials,” Favre said. “The whole time you have to be mindful of where you’re stepping.”

Lewis leads Virginia Task Force 1, one of 28 urban search and rescue teams across the United States that are supported by the Federal Emergency Management Agency, but sponsored and overseen on a local level. When dispatched in its entirety, each team has about 70 to 80 people, including physicians and structural engineers who can assess safety.

In Surfside, two similar Florida task forces have a leading role in the rescue, with other experts from as far away as Israel and Mexico joining. The Virginia team was put on alert that they could go, but the alert has been canceled, Lewis said, indicating the teams on the ground believe they have what they need.

While the passage of time since the collapse early Thursday diminishes the chance survivors will be found, miracles do occur. The team from Miami-Dade County responded in Haiti in 2010, and pulled a girl from rubble eight days after the earthquake.

In Haiti, Ken Keen, then a three-star Army general, had just arrived several hours before earthquake, and was on the porch at the U.S. ambassador’s residence overlooking downtown Port-au-Prince when the ground began shaking. He ran out into the open, watched as the building swayed “back and forth like a palm tree in a windstorm,” and heard what he initially thought were explosions.

In reality, it was the collapse of buildings.

One of those buildings was the Hotel Montana a couple of blocks away. Reinforcing the cruel chance involved, one of the U.S. service members on his team was killed inside, while two others “rode it down” as the building collapsed and survived, Keen said.

The general, who had previously commanded the Army’s elite 75th Ranger Regiment, was put in charge of the U.S. military’s relief effort, and came away deeply appreciative of the rescue crews, he said. He also realized that while some workers did not want to stop, they needed to rest.

“You have to force people to do rotations and pull them off the site, and make it a part of the routine,” he said. “You have to have some down time.”