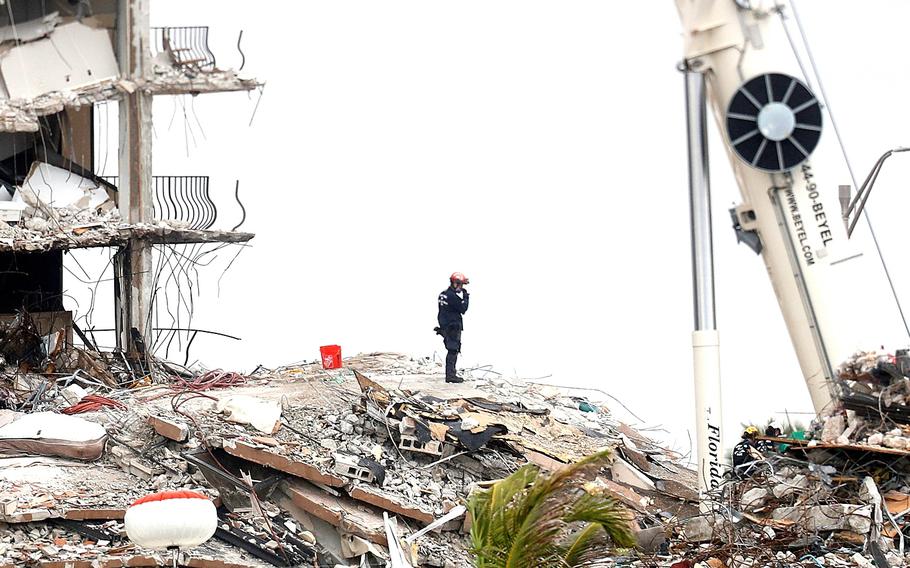 Search-and-rescue crews are working to recover missing people who were in the Champlain Towers South condominiums when it collapsed last week in Surfside, Fla., June 28, 2021. (Octavio Jones/for The Washington Post)

SURFSIDE, Fla. — Maria Iliana Monteagudo is a relative newcomer to Surfside. She used all the money she had after her divorce — $600,000 in cash — to buy her unit, No. 611, in December.

She was enchanted by the ocean views and the friendly neighbors. “I liked the apartment, nice view, nice building,” Monteagudo said in an interview. “Nobody told me anything bad about it. I bought the apartment blind. Everybody omitted the reality.”

Then Monteagudo heard a crack. There was a line in the wall coming down from the ceiling — about two fingers wide. “Then it started getting wider and wider as I watched,” she said. “Something said, you have to run. You have to run immediately.”

“I ran to my bedroom, and took off my robe and changed into any dress and any sandals. I ran to the dining room table, I got my purse and my credit cards. I took the key, I blew out the candle that I light every night for Guadalupe of Mexico,” she said. “I blew out the candle, just in case.”

Monteagudo ran to the stairs, descending quickly. Between the sixth and fourth floors, there was a noise — and she realized the building was falling. Monteagudo worried that she would be crushed. “I thought if it’s coming down, and it’s coming down, down, down like a domino effect,” she said.

When Monteagudo finally escaped from a door, there was water up to her ankles, and cables floating in it. She ran into a security guard. “He told me, ‘Mama, mama, let’s go, this is an earthquake,’ “ Monteagudo said. “I said, ‘No, it’s not an earthquake, it’s the building falling down.’ “

There was a wall she needed to climb, then an abyss several feet wide. The security guard urged her to jump. “But I couldn’t jump,” she said. “I saw a piece of column, and I put a foot on it, and I climbed over and found myself in the middle of the street.” She emerged from the building in the visitors parking area.

She is thinking about an 80-year-old woman who lived across the hall, who welcomed her when she first moved in months ago. “I thought that she was with her son that day. I called her daughter-in-law. She disappeared. She hasn’t been found,” she said. “I feel so bad. I told them I felt so bad. I cry a lot, I feel so guilty.”

She also feels angry. “A lot of people knew there were problems in that building. This is a disaster that somebody could have stopped before it happened,” she said.

And then there’s the shock. “I can’t believe it,” Monteagudo said, rubbing a charm of the Virgin of Guadalupe that hangs on a necklace — one of the few personal belongings she has left. “I just can’t believe it. I don’t know what will happen to me now.”

The Washington Post’s Paulina Firozi contributed to this report.