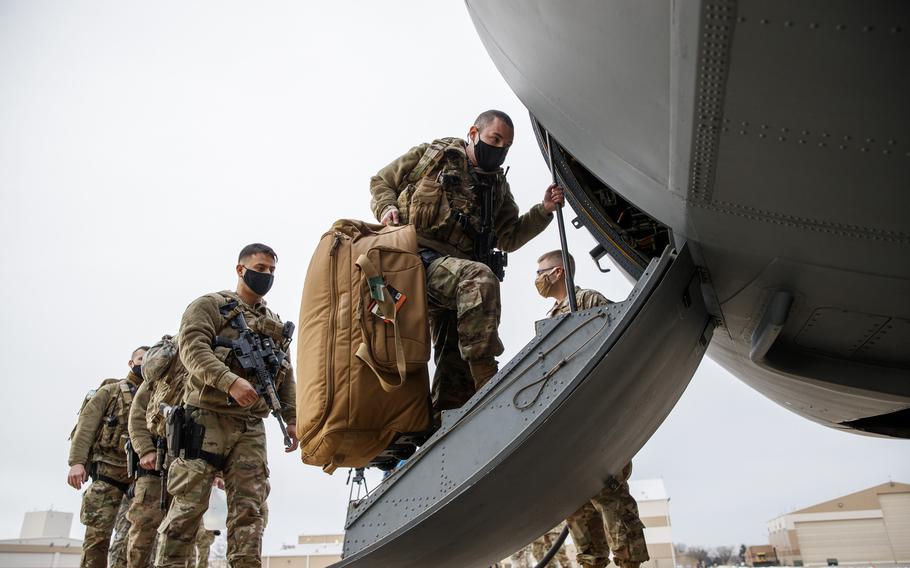 Cotton questioned Defense Secretary Lloyd Austin before the Senate Armed Services Committee last week, telling the former commander of the U.S. Central Command he wanted to share “just a small selection of what your own troops are saying.”

“One Marine told us that a military history training session was replaced with mandatory training on police brutality, white privilege and systemic racism,” Cotton said. “He reported several officers are now leaving his unit, citing that training.”

Cotton detailed other submissions he said were received through the whistleblower webpage, including one from a service member who said a unit was required to read the book “White Fragility” and an airman who said a unit was forced to participate in a “‘privilege walk,’ where members of the wing were ordered to separate themselves by race and gender in order to stratify people based on their perceived privilege.”

During the committee hearing, Cotton also submitted a list of complaints for the record. There were 28 total submissions on the document, obtained by The Dallas Morning News, ranging in focus from critical race theory to alleged bias in military academies. One complaint was included twice.

“Woke Fundamentalism in the Military training at my units (redacted) treats the thought of saying ‘All Lives Matter’ as heretical and unacceptable,” one reads. “The unit encouraged turning in those who have such thoughts, beliefs during the ‘extremism stand down day.’”

“A (Department of Defense) Civilian who is retired military asked why is the training only focused on extremist groups on the Far Right and not pointing out Antifa and BLM on the Far Left who were burning down cities during the summer of 2020? The answer given because of the far-right groups that were involved in the 06 JAN 21 ‘insurrection,’” another says.

“I have worked for (unit redacted) for the past 12 years,” one submitter said. “They conduct training expeditions for several military academies. They now require all staff to attend a three day seminar on Critical Race Theory. And they hire new instructors based upon their race not experience or skill sets.”

The senator told Austin he and Crenshaw are seeing reports of plummeting morale, unanticipated retirements and “growing mistrust between the races and sexes,” arguing that none of it existed six months ago.

Cotton said the submissions the two lawmakers have received blame the diversity and inclusion training the Defense Department has restored under the Biden administration for the apparent morale and trust problems among military personnel. The Trump administration halted that training in September 2020.

Trying to put Austin in the hot seat, Cotton asked him a series of quick yes or no questions:

—“Do you believe that our military is a fundamentally racist organization?”

—“Do you believe that any member of the military should be treated differently based on their skin color and sex?”

—“Do you believe that race and sex should be a key factor when selecting combat leaders, rather than, say, operational excellence, technical proficiency, leadership, agility and integrity?”

Austin repeatedly said that the questions deserved more than a yes or no answer, but eventually responded “no” to all.

A Crenshaw aide said the congressman’s office has received more than 300 serious, credible complaints, more than any satirical comments.

The congressmen have not yet decided how long the whistleblower page will be open, the aide said.

Cotton and Crenshaw took to Twitter after the exchange with Austin to blast the new Pentagon training, focusing specifically on critical race theory, the most recent concept to get caught up in the partisan fight over how schools and the military should teach and address American history.

“We’ve received hundreds of complaints about this — CRT lessons, white privilege training manuals, even ‘privilege walks.’ This is a disturbing, real trend in our military that the left wants to ignore,” Crenshaw tweeted. “We’re not going to ignore it. We’re going to expose it.”

Both also appeared on Fox News to discuss what they see as a concerning shift in the military and schools toward embracing critical race theory. Crenshaw joined the show “Fox & Friends” on Friday to discuss the whistleblower page and the complaints he and Cotton have received.

“Some of the feedback we got … there’s things like ‘white privilege’ walks, ‘take two steps forward if you’re white, a step back if you’re Black’ — tell me how that’s inclusive. Tell me how that doesn’t create divisions within our military,” Crenshaw said.