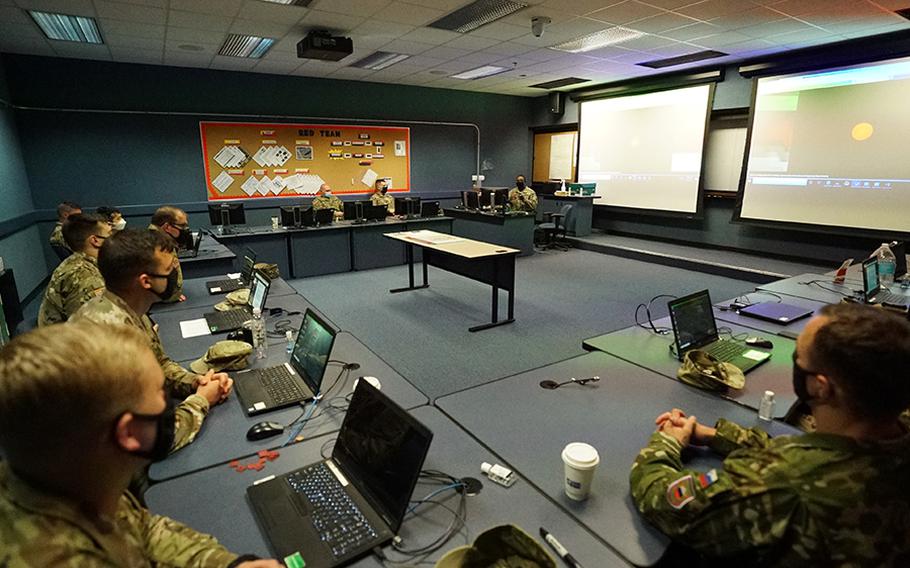 Soldiers at the Fort Sill Non-Commissioned Officer’s Academy in Oklahoma meet for their extremism stand-down in March 2021. (Ygal Kaufman/U.S. Army)

WASHINGTON — Faced with the herculean task of combating extremism in the ranks, Defense Secretary Lloyd Austin directed all military leaders to gather with their units by the first week of April to discuss what it is, how and when to report it, and what it means to serve.

The extremism stand-down is taking place at bases across the world for all branches, and it’s getting mixed reviews. The Army, as the largest force, has the most people going through the training.

Some soldiers expressed frustration at “check-the-blocks” training led by military officials who were not prepared to answer complex questions about extremist activity. Others said the training was effective when skilled instructors led honest, open discussions.

Stars and Stripes interviewed soldiers who completed training, some who spoke on the condition of anonymity.

“You had a few people who were very loud and boisterous about their opinion, but then the majority of people were just [like], ‘This was kind of a waste of time,’ ” he said late last week.

The one-day stand-down is the start of the Defense Department’s renewed approach to preventing extremism.

The Pentagon chief directed the stand-down to address extremism in February in response to the Jan. 6 riot at the Capitol in Washington. Thirty-seven military veterans and active-duty service members have been charged for their involvement.

“This is just a step in what the secretary believes will be [a] very deliberate process to try and tackle this problem. … It might bring to light concerns and experience that he might not be aware of,” Pentagon spokesman John Kirby said in February.

The Defense Department provided loose guidelines on what form the stand-down should take, including discussions about prohibited activities, reporting extremist behavior, case studies and answers to common questions. Unit heads and supervisors could then tailor the training.

The Army’s message: “Extremist activity is incongruent with military life and will not be tolerated,” according to the office of public affairs.

Active-duty members have until April 6 to complete the training, and reserve forces have an additional month to finish.

Ramón Colón-López, the senior enlisted adviser to the Chairman of the Joint Chiefs of Staff, told reporters last week that the stand-down was delegated to the lowest levels of unit command because the majority of troops are at that level.

“The people that are actually affecting the mission, that’s where they live. For us here at the Pentagon, we’re far detached from that,” Colón-López said. “So we have to trust those commanders in the field to be able to fix their behavior.”

Colón-López described the training as a “conversation” with legal experts, military police and others.

Still, “death by PowerPoint” came up in conversations with members of the Army last week after their training. Outside experts were not always there to help facilitate the discussions, which left supervisors without subject matter expertise on their own.

A sergeant at Fort Sam Houston said his training was focused on Sexual Harassment/Assault Response and Prevention training, or SHARP, as well as Equal Opportunity training, which is designed to prohibit discrimination.

“It kind of felt like they were trying to pack in all of the mandated trainings in at once,” he said. “A lot of people were like, ‘What was the point of this?’ ”

A logistics officer at Fort Leonard Wood said his training did a good job of focusing on extremism, highlighting that a person from any background can be recruited or be active in an extremist organization. He said he was frustrated by how hard it is to identify red flags.

In front of 50 soldiers in an auditorium, the sergeant first class leading the training asked the group to point out the warning signs after each case study.

“That was the frustrating part because there really were no warning signs. … They can hide it or lie to you,” he said.

The case studies, he said, were blatant examples of extremism, like a terrorist attack, which left less-obvious “gray areas” for officers to figure out on their own. He would have preferred a clear list of examples with action items, a sentiment that was shared by others.

The bulk of the training focused on the examples, defining extremism and reporting extremist behavior, and the rest was giving “proof that it exists,” he said.

In interviews, soldiers drew equivalencies between the Black Lives Matter racial protests last year and the storming of the Capitol on Jan. 6. They questioned the timing of the stand-down and asked why it wasn’t done last year, when protests occurred in Seattle, sparked by the death of George Floyd.

Colón-López said last week that he was “concerned” over the number of troops who shared that view, from “every echelon.”

The answer, he said, is simple: “When the military was called upon to go ahead and support an effort, we did. We never got called for the law enforcement issue that was happening in Seattle.”

Christina Bembenek, a U.S. Army War College fellow who has written about extremist theories and the military, said in an interview Monday that to ensure troops know the difference between the two events, it’s important to make them understand that while the military is not partisan, it is political.

“We follow the orders of the elected politicians in the government. … We are political. But we are not partisan. And that’s where I think we need to more clearly describe things” and talk about what partisan means, she said.

She said that having a rich discussion on what the First Amendment is, the intent of the individuals who were outside the Capitol and people who entered a government building unlawfully would be fruitful.

“You don’t have to have any type of partisan discussion on that,” she said, when you focus on the Constitution.

Tyler Santangelo, a sergeant in leadership school to become a staff sergeant at the Fort Sill Non-Commissioned Officer’s Academy in Oklahoma, said his nine-hour-long training was valuable, but training at the academy was different than it is for most units.

“I got lucky enough to where I did it at a noncommissioned officer academy where there [are] trained instructors who know how to lead open discussion.”

The training started with discussing how the soldiers define extremism and what it means under Army doctrine, and “how [extremism] counteracts our values,” Santangelo, 26, said in an interview last week.

Santangelo said that he and others thought the training would be a way to “weed out people on the right side of the political spectrum,” but that it opened his eyes to the types of extremism in the ranks.

The Virginia native said he learned how to identify red flags — noticing people who actively disengage from the group, no matter the situation, for example — and how to target young people to combat isolation early.

One way to prevent loneliness is to encourage new soldiers to contact their parents when they get to the unit. The key is also fostering an environment of empathy and talking to each other and not being “afraid to send it up [the chain of command] if something’s going wrong,” Santangelo said.

“The idea now is that taking the time to care about your soldiers and talk to them and make them feel like they’re actually part of the team is the No. 1 way to combat [extremism],” he said.

The DOD stand-down guidelines do not require unit heads to provide feedback, but Colón-López said that the services will share lessons and identify gaps with the Defense secretary.

That could lead to more formalized annual or professional military training, or the establishment of a task force on extremism in the military, he said.

Bembenek, the U.S. Army War College fellow, has ideas on ways to address extremism beyond the basics.

Media literacy should be incorporated into the training to equip soldiers with critical thinking skills to decode fact from fiction online, she said.

A bolstered civic education would also help, she said, so that troops better understand the military oath. However, the most important part of combating extremism for her is having a constant dialogue so soldiers can openly express their beliefs and views.

“It’s good to be in an environment where soldiers can ask the tough questions and leaders can think about it, research it, talk to outside sources and then come back and say, ‘All right, let’s talk more about this,’ ” she said. “This is just the start of this conversation.”