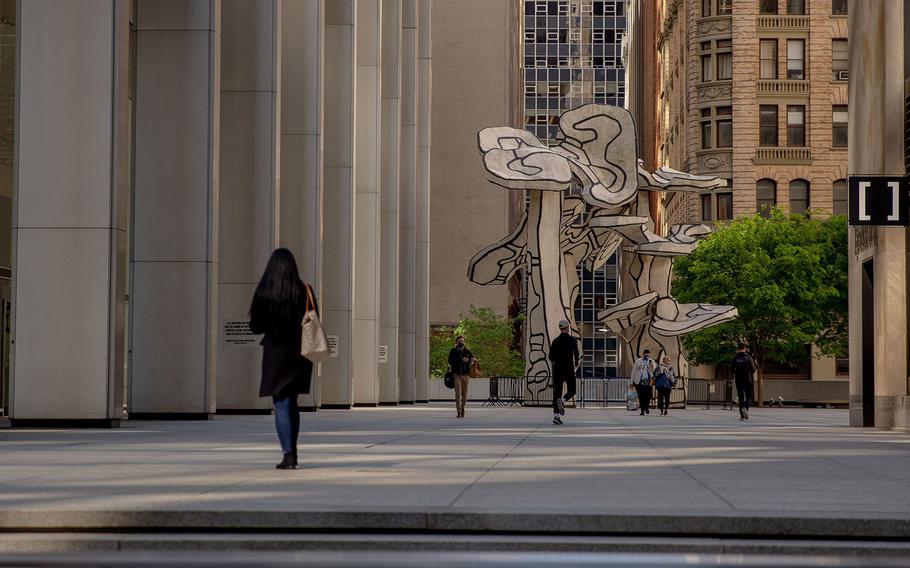 Pedestrians in the Financial District of New York on May 12, 2021. After more than a year of remote work and scattered employees, several of New York’s banks are gearing up to bring throngs of young people into the office over the coming weeks. (Amir Hamja/Bloomberg)

Gone are the cozy deskside chats and boozy networking nights at packed bars. In are daily health checks and recommendations for masking up.

The approach of summer means the annual rite of passage for hundreds of would-be financiers: the Wall Street internship. After more than a year of remote work and scattered employees, several of New York’s banks are gearing up to bring throngs of young people into the office over the coming weeks — attempting both a return to normalcy and the establishment of new routines.

JPMorgan Chase & Co. has begun briefing interns about safety protocols and office regulations. Deutsche Bank AG is coordinating schedules to ensure it has enough staffers on site to mentor young workers. Goldman Sachs Group Inc. has advised managers to host social gatherings outside and to take attendance, for contact-tracing purposes.

“We’re going to try and make this, frankly, as normal as possible,” said Gerry Keefe, head of global banking for the Americas at HSBC Holdings Plc. “Although the floors won’t be at the same density as they were pre-COVID, we’ll still have a critical mass in place.”

For Wall Street’s largest banks, the return of interns marks the start of a get-back-to-normal summer as the COVID-19 pandemic ebbs in America. Goldman Sachs is seeking to have U.S. employees back to the office by mid-June, while JPMorgan workers will follow suit a few weeks later. New York itself is livening up with the return of 24-hour-a-day subway service and the reopening of bars and restaurants at full capacity.

The city’s revival is slow going — only about 18% of the metro area’s office workers have returned, according to security company Kastle Systems — and finance firms including Bank of America Corp. and Citigroup Inc. have opted to keep their internships virtual. Still, hundreds of college students will flock to Wall Street’s hallowed trading floors and investment banking desks in the coming weeks in the hopes of proving themselves and landing one of the few spots in analyst programs.

Candidates spend months interviewing for the coveted internship spots and offers are generally handed out a year in advance. Banks have been known to hand out acceptance letters to less than 2% of applicants.

Last year, companies hurriedly converted their internship programs to a virtual format as coronavirus cases swelled nationwide. As banks try to cajole their broader workforce back to the office, one of their main arguments against Zoom culture has been that younger workers have struggled to learn without the mentorship and camaraderie that come from being together.

“The apprenticeship culture is one that is prized in banking and those of us who have been in banking for a long time definitely benefited from it and remember it fondly,” said Keefe. “Most people can tell you off the top of their head who the two or three senior bankers were when they were junior bankers who invested time in them.”

Some of the social aspects of the summer internship won’t make a return just yet. Most firms aren’t planning to provide interns with housing, one of the ways they have historically hung out after hours. At HSBC, the bank will use lunches with senior executives and volunteering activities to encourage interns to network with each other and employees from across the company.

At Deutsche Bank, U.S. interns were given a choice of whether they wanted to complete the program from home or the office. More than 90% said they wanted to be in person.

The firm consulted with top investment banking executives and junior bankers alike to make sure they would be comfortable coming into the office to advise the interns. Now the bank is crafting plans for how to collaborate when employees will still need to social distance in the offices.

“If someone is going through a spreadsheet, someone going up and pulling up directly next to them — some of those things I think won’t happen,” said Drew Goldman, global head of investment banking coverage and advisory at Deutsche Bank. “But I think for the most part you can get into a conference room and go through stuff with someone. I would say we’re going to be back to 85% to 90% normal.”

Goldman Sachs is planning to host 96% of its interns in person, excluding those in India, where the recent explosion in coronavirus cases has kept the program remote. After a weeklong virtual training, interns will begin filing into the bank’s offices on June 14, the same day most workers are expected to return.

The firm is aware that many of its interns will have to quarantine upon arriving for the program, so it’s already helping them navigate those local restrictions. The bank’s wellness team will provide interns with a service that offers other health and safety tips.

“Every year it feels this way when the interns start, you feel the palpable energy in the building,” said Vicki Tung, Goldman’s global head of campus and early careers recruiting. “Obviously our goal is to bring back as many as possible for as long as possible, and I do truly believe that we are structured and organized in a way that we can do so safely.”