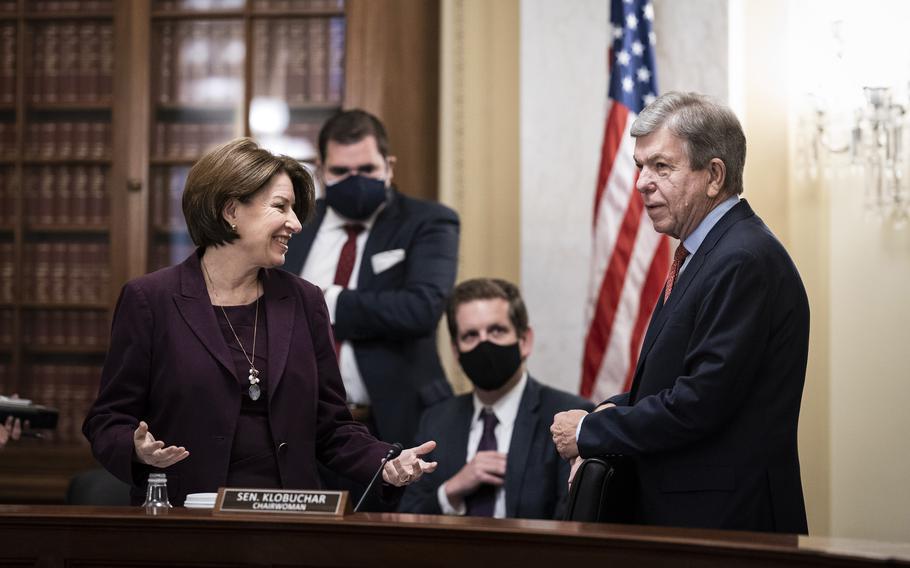 WASHINGTON — Sen. James Inhofe, R-Okla., wasn’t allowed to talk about where he was heading, and that made him happy.

“I’m not at liberty to say. This has some security concerns,” the ranking Republican on the Senate Armed Services said May 27. He was heading abroad.

Since February 2020, the global pandemic had shut down critical overseas trips for lawmakers wanting to meet face-to-face with key allies. Finally, with vaccinations spreading throughout most of Congress, Inhofe and other senators were back up in the air during the Memorial Day recess, a traditional time to meet with overseas allies and see how U.S. military operations are handling certain hot spots.

“I think it’s a sign that all this thing that we’ve been going through with the last 15 months is coming to a close. I mean, that’s the good news,” Inhofe said.

From codels, as these trips for congressional delegations are known, to the return of annual rituals such as charity baseball games, a new normal is settling in on Capitol Hill.

Masks are no longer required in most places on the campus, official visitors can schedule in-person meetings, some lawmakers are hiring summer interns to work inside their offices, and some form of co-ed softball is likely to spring up across Washington.

The most noticeable change is the larger number of staffers coming through the office doors each day, as Republicans and Democrats alike have begun to call back more aides. Some lawmakers have even recalled their entire staffs to the congressional office buildings.

“We’re back. Everyone’s been vaccinated,” Sen. Amy Klobuchar, D-Minn., said in an interview before the Memorial Day break.

As the chairwoman of the Senate Rules Committee, Klobuchar has played a leading role in overseeing the congressional response to two major crises inside the U.S. Capitol complex, the coronavirus pandemic and the security breaches during the Jan. 6 insurrection.

She said that her office worked to follow the guidance of Brian Monahan, the attending physician for Congress. “Following the advice of the Capitol physician, a lot of people have brought their staff back,” she said.

To be sure, the pandemic still looms large in the Capitol. Monahan has recommended that masks still be worn on the House floor because half the members of the Republican caucus either have not been vaccinated or have refused to tell the doctor whether they received the shots somewhere else, leaving one-quarter of all House members potentially not inoculated.

Members of the House will be allowed, at least until July 3, to continue voting by proxy through other lawmakers who are on hand if they sign a letter stating that health risks have kept them from traveling to Washington. Committee hearings, in the House and Senate, still have some lawmakers and witnesses appearing remotely by video.

Last weekend’s annual Memorial Day concert was virtual, just as the annual Fourth of July celebration is likely to be again, not at the traditional spot on the West Front lawn of the Capitol.

And no one has any idea when the public will be allowed to just show up and visit, sit in the galleries and watch House and Senate proceedings.

Still, this summer is shaping up to be a dramatically different few months from the lost summer of 2020.

No member of Congress has announced a positive coronavirus test since late January, after a surge of cases last fall and winter. Staffers and Capitol police have largely been vaccinated as well.

And Monahan said that staff levels can return to their pre-pandemic levels without social distancing inside offices, as long as individuals have been vaccinated.

“House and Senate offices may discontinue many of the previously established social distancing limitations to reduce occupancy and require mask wear especially for individuals who are fully vaccinated,” Monahan wrote in his May 19 guidance letter, following similar advice from the CDC.

One of the great summer traditions — co-ed softball games played on the Mall and in other parks around the capital region - will return in an altered fashion. The city government required vast contact-tracing systems and expanded health insurance, making it impractical to run the formal leagues.

Instead, some pickup games will be played, and the National Park Service has informed the teams that it will build out an online site for reserving fields.

In the late summer or early fall, a tournament will be held over a long weekend in hopes of crowning a champion, after last year’s season disappeared amid the pandemic.

“My creaky bones appreciated the rest,” Gary Caruso, the commissioner of the Congressional Softball League, joked.

A veteran of roughly 45 years of co-ed softball in Washington, Caruso can fondly recall the camaraderie the games build with congressional staffers, bringing Republicans and Democrats together on a field. Romances blossomed on the field, marriages followed and so did children.

The same spirit has guided the annual Congressional Baseball Game, which after a one-year hiatus returns to Nationals Park in late September. Although Democrats have won eight of the past nine meetings, their team faces a major challenge without Cedric L. Richmond - the former congressman is now a senior Biden White House adviser and no longer eligible to pitch for the Democratic team.

In late October, the Congressional Women’s Softball Game — pitting lawmakers against the media — also returns after a one-year break.

For lawmakers, the return of codels might be the most important phase of starting a new normal.

They drove home the message of continued U.S. support as Russian aggression continues in the region.

“We need to let Vladimir Putin know that we want to hold him and Russia accountable for their actions,” Shaheen told an interviewer in Kyiv.

Portman told the same interviewer the senators continued to believe Putin must “give back Crimea” and listened to stories of Russian troop maneuverings.

“We heard that there are Russian troops inside Ukrainian territory,” Portman said,

For Inhofe, a pilot, getting back into the air was a relief. After his trip ended, his office announced that he had been to Romania with two other lawmakers, there to show U.S. support for that tiny nation’s strong anti-Russia posture.

Before the trip, he said these delegation events were an important sign of U.S. revival.

“To get life back to normal, I’d prefer to say it that way,” he said. “I think it’s important.”