Plummeting vaccination rates have turned what officials hoped would be the “last mile” of the coronavirus immunization campaign into a marathon, threatening President Joe Biden’s goal of getting shots to at least 70% of adults by July 4.

The United States is administering fewer than 1 million shots per day, a decline of more than two-thirds from the peak of 3.4 million in April, according to The Washington Post’s seven-day average, even though all adults and children over age 12 are now eligible.

Small armies of health workers and volunteers often outnumber the people showing up to get shots at clinics around the country, from a drive-through site in Chattanooga, Tenn., to a gymnasium in Provo, Utah, or a park in Raleigh, N.C.

The slowdown is national — with every state down at least two-thirds from its peak — and particularly felt across the South and Midwest. Twelve states, including Utah, Oklahoma, Montana, the Dakotas and West Virginia, have seen vaccinations fall below 15 daily shots per 10,000 residents; Alabama had just four people per 10,000 residents get vaccinated last week.

However, the picture varies considerably across the country: Thirteen mostly East and West Coast states have already vaccinated 70% of adult residents, and another 15 states, plus the District of Columbia, are over 60% and will likely reach Biden’s goal.

But the rest are lagging behind. Tennessee and five other states are at 50% or below and vaccinating at such low rates that meeting the president’s threshold is very unlikely.

The steep decline began in mid-April, coinciding with federal officials’ temporary suspension of the Johnson & Johnson vaccine while they probed rare blood-clotting reactions. That slowdown has continued, with only 2.4 million adults getting their first shot last week. Officials must get a first dose to 4.2 million adults per week to meet Biden’s goal of ensuring that 70% of adults are at least partially vaccinated by Independence Day.

Complicating the push: Health officials have already reached the “low-hanging fruit — those people who absolutely want to get vaccinated without you telling them anything,” Anthony Fauci, the government’s top infectious-diseases expert, said on a White House-organized call with community leaders on Friday. “You’re left with a group that you may need ... trusted messengers who go out there and explain to them why it’s critical for themselves, for their family.”

Polls have found that about one-third of Americans have no immediate plans to get vaccinated, with some holdouts saying their skepticism has intensified over time and others arguing the issue is moot because the pandemic has receded in the United States. Public health experts say the nation needs widespread immunity to prevent a resurgence of cases later this year.

The slowdown has prompted a flurry of advertising, lotteries and promotions to win over holdouts, even as the list of incentives for people getting shots has ballooned almost to the point of parody. West Virginia officials are offering a chance to win rifles. Multiple businesses have promised treats like free beer, doughnuts and marijuana. Residents of several states now compete for million-dollar cash prizes in special lotteries.

Recognizing the challenge — and the risk of missing the goal — Biden officials have mobilized thousands of organizations and volunteers.

“We need to bring the vaccines to where people are and answer the questions that people have,” Jeff Zients, the White House coronavirus coordinator, told reporters on Thursday. “And we are confident that more and more people will get vaccinated, leading up to the Fourth of July.”

The White House last week announced a “month of action” with an array of initiatives, including a partnership with Black-owned barbershops and salons to raise awareness of the vaccines, a “Mayors Challenge” for 79 cities to compete on vaccination rates, and free child care for those getting the shots. It also lined up more than 2,000 events this weekend across every state, tapping community groups, advocacy organizations and celebrities like singer Ciara, athlete Russell Wilson and comedians Desus and Mero to trumpet pro-vaccination messages, a White House spokesperson said.

Beyond the political stakes, public health officials say achieving widespread immunity remains essential to protect still-unvaccinated Americans, who continue to contract the virus at elevated rates, even as total cases dwindle. Reaching that goal is also thought to be necessary to prevent a resurgence of the virus this winter or next year.

Jennifer Kates, who leads global health policy for the Kaiser Family Foundation, said she’s worried about lagging vaccination rates in some states, warning of broader risks to Americans if the virus takes hold among unvaccinated people and mutates into more contagious or lethal forms. 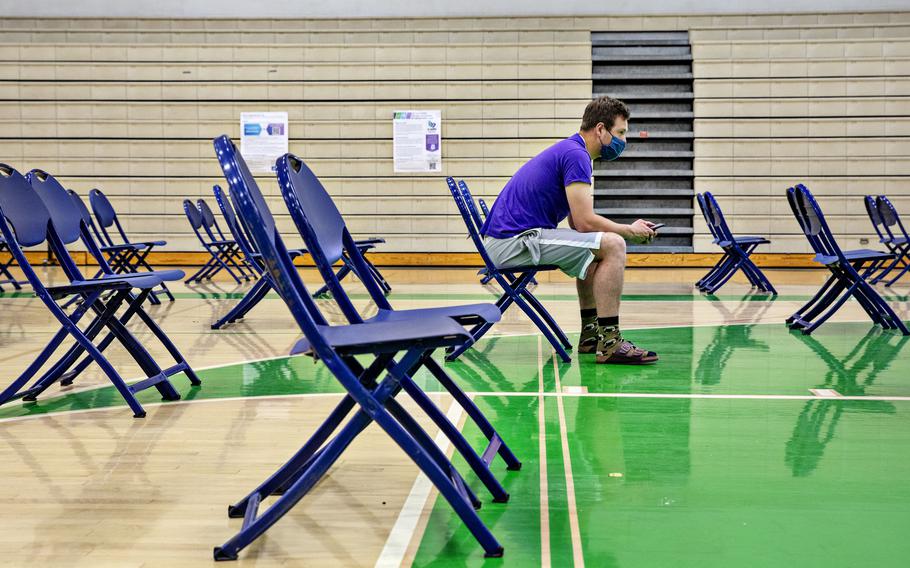 If Biden’s goal is met next month, it will be due to the sustained efforts of health officials in places like Chattanooga, where more than half of the county’s 370,000 residents remain unvaccinated.

The drive-through vaccination site here, set up by Hamilton County officials on the southern bank of the Tennessee River, is a serene place to fight a global pandemic: waterfront walking paths and gardens bursting with flowers — and perhaps most important, no waiting for the roughly 200 people who got coronavirus vaccines on a recent Wednesday.

But it’s also the only clinic still operated by the county, which administered as many as 16,000 doses per week across three sites in February but is down to just 1,500 shots per week now. Officials are opting instead for smaller, targeted pop-ups ― like temporary sites at Chattanooga’s weekend music festival and a popular Hispanic supermarket — that can reach community holdouts who wouldn’t make plans to visit a clinic.

“As the numbers have dwindled down, we’ve pivoted,” said Fernando Urrego, Hamilton County’s interim health officer. “We now know that we’re not going to be able to give out 1,000 vaccines in one day in these pockets. If we get 10, we’re ecstatic. If we get 15, it’s a good day. It’s still a lot of effort for low yield, but we’re OK with that.”

Officials in Utah County, south of Salt Lake City, are making similar trade-offs. Fewer than a third of people in this predominantly young and conservative-leaning community are fully vaccinated, among the lowest rates in the state. Yet health officials, who once maintained four vaccination locations, are cutting back to just a single large one: a gymnasium in a former high school in centrally located Provo, staffed by roughly three dozen health department workers and volunteers on a recent Wednesday. Instead, they’re increasingly relying on mobile units intended to target underserved communities.

“We can’t control the demand on the vaccine, so we can’t force 70% or even 50% of people to get the vaccine,” said Tyler Plewe, deputy director of the Utah County Health Department.

Mindy Gee, 43, of Pleasant Grove, said she was surprised there weren’t more people in the gymnasium lining up with her for a second shot. As she waited out her 15 minutes after receiving it, she said she knows many people who regard the vaccines with suspicion.

“In certain circles, it’s almost shameful to have gotten the vaccine,” she said. “It’s completely bonkers to me.”

Health providers in Oklahoma, where 54% of adults have gotten one shot, also have seen demand slow to a trickle.

Greg Clyde, a bowtie-wearing independent pharmacist in Oklahoma City, said that when he began administering coronavirus vaccines in February, he was inundated by hundreds of phone calls requesting appointments — so much so that he invested in a new phone system. In all, he spent about $5,000 on new equipment, including a freezer and an extra refrigerator to store vaccine vials, and hired three new full- and part-time workers to help administer up to 280 shots per week, with almost 1,000 people on the waiting list.

But with so few customers now seeking vaccinations at his drugstore — no more than a dozen adults per week, Clyde said — he agreed to administer shots to nearly 100 employees of a major Oklahoma City-area automotive dealer last week.

Trying to win over holdouts, officials in a growing number of states have turned to text-message campaigns, public service announcements and other efforts.

In North Carolina — which has also given at least one shot to 54% of adults — officials announced the “Let’s Bring Summer Back” campaign, setting up dozens of sites to administer vaccines, including a health fair located outside state health department headquarters in Raleigh’s Dorothea Dix Park. On a recent Friday, people who stopped by the fair to get vaccinated could also get a free Frisbee, pick up complimentary vaccine-branded gear or buy an ice cream cone from one of the food trucks recruited for the occasion.

“My job is to make this convenient,” said North Carolina Health and Human Services Secretary Mandy Cohen, who oversaw the event decked out in a “I took my shot” T-shirt. The fair was one of about 50 vaccination sites within 10 miles, Cohen said. “I want people to be tripping over opportunities to get vaccinated.”

The drop-in event did lure some vaccine holdouts, who proffered a range of reasons for why they hadn’t gotten immunized. Chris Johnson, a 44-year-old construction worker with peripheral artery disease, said he’d worried about the risk of long-term effects from the new vaccines and wanted to see how others responded first. Jalen Preston, an 18-year-old high school student, had been looking for a site that administered the Pfizer-BioNTech vaccine; his mother, Jamila Robinson, said she had been worried about her son receiving the Johnson & Johnson vaccine after seeing reports of the pause.

Javier Sharpe, a 21-year-old who balances a job with classes at nearby Wake Technical Community College, said he appreciated that he didn’t need an appointment.

“It was on the way to where I was going,” Sharpe said.

Officials in states that have already met Biden’s goal say they’ve also seen demand slow — albeit much further along in their race to immunize everyone.

“We are down to the last quarter-mile,” said Nirav Shah, director of the state Center for Disease Control and Prevention in Maine, where about 75% of adults have received at least one shot.

Shah said his team is also more focused on meeting small numbers of people in places like doctors’ offices and schools, rather than mass vaccination sites.

“The thresholds have changed,” he said. “I wanted 200 at each clinic two to three months ago. Now I will send a nurse or nurses if you have 10 people at your mosque or church.”

“We are not unfurling a ‘mission accomplished’ banner,” he added. “It’s still all systems go.”