Vaccines push the question: Are you going back to church? 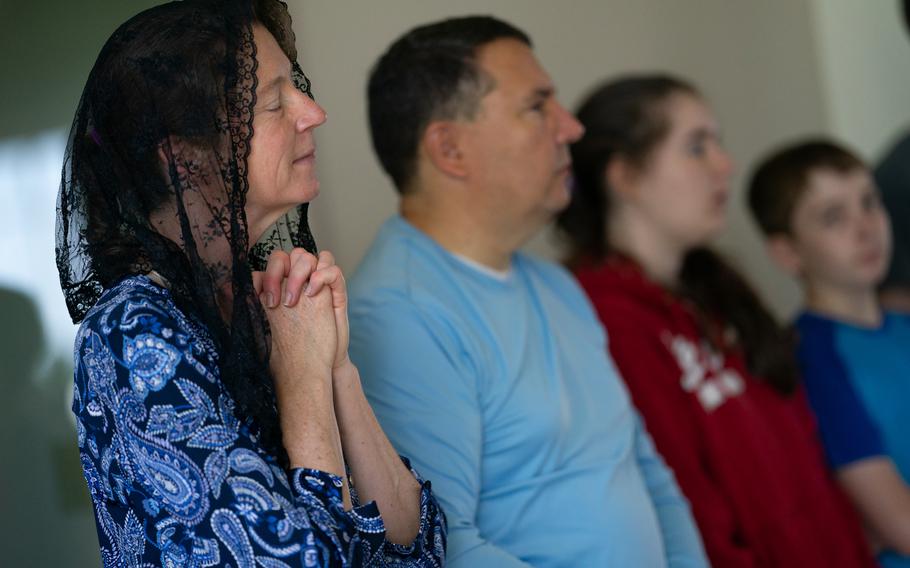 Now that more people are vaccinated, many are reexamining their routines, pondering whether they want and are ready to go back to their favorite pre-pandemic coffee shop, exercise class or concert hall. Amid this investigation of needs is a weighty one: What about worship services?

Faith leaders have been anxious about this moment since the pandemic broke out a year ago, and the possibility that Americans, in their secularizing, convenience-oriented country, would spend a year away from houses of worship and decide it suited them just fine. All year clergy have been waiting to see if slews of people will decide to become virtual-only members, flit between multiple virtual services, or just quit congregational life altogether.

The call to return has concrete heft in the Catholic Church, whose canon law says Sunday Mass “must be observed in the universal Church as the primordial holy day of obligation.” When the pandemic began last year, bishops offered a dispensation — a divine pass from coming in person. In recent weeks, however, bishops across the country have been withdrawing the dispensations, including on Wednesday leaders in Washington, D.C., Baltimore, West Virginia, Richmond, Northern Virginia and Wilmington.

Thanking God for the progress the country has made curbing the pandemic, the bishops’ statement said “many places in our region are enjoying a return to some sense of normalcy.” Therefore, they wrote, the obligation will be reinstated as of the weekend of June 26-27.

“We welcome and encourage the Faithful to return to full in-person participation of the Sunday Eucharist, the source and summit of our Catholic faith.”

Yet in 2021, simply welcoming people back isn’t simple. Catholics, like Americans in general, are divided about the continuing danger of the pandemic and how well vaccines will really protect them indoors. Congregations in some cases have been places of division during this intense year of disease and protest. This is happening as the number of Catholics who said they belonged to a parish is shrinking. That figure dropped from 76% in 2000 to 58% in 2020, according to a Gallup poll released in April, a faster rate than for Protestant denominations. The year also accelerated the move into a virtual world, which for the spiritual leads to questions about where exactly is the divine present (or absent, for that matter)?

Some find the return of the “obligation” motivating and encouraging and long to be together in person. Other Catholics say the language is a turn-off, judgmental and not in tune with powerful online communities that have been created this year.

“We need to be together (in person), receiving the sacraments. The one thing about the Catholic Church is it’s deeply physical. It’s not some cloud religion. We eat our God,” said Michael Murphy, director of the Hank Center for the Catholic Intellectual Heritage at Loyola University Chicago. Coming in person is part of the “spiritual diet; get here, come on back.” 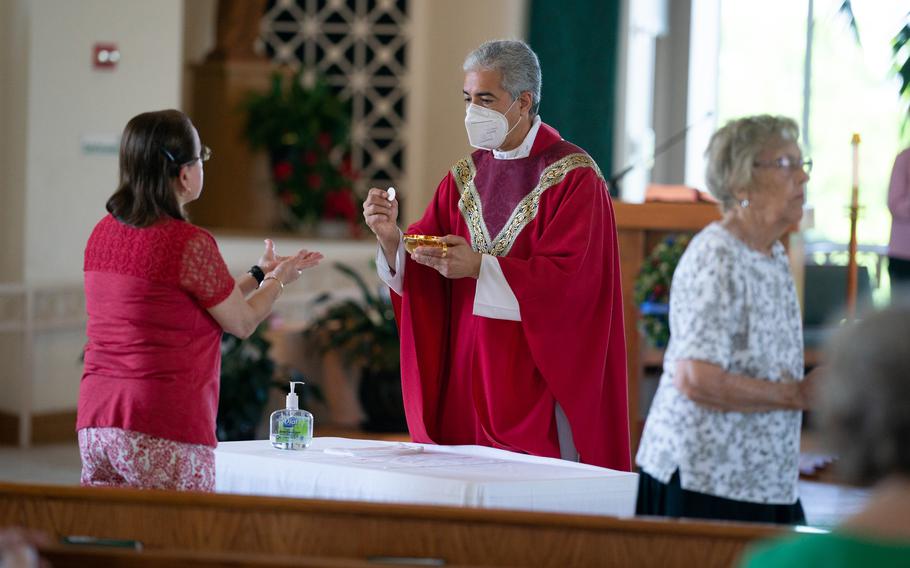 Monsignor Edward Filardi of St. Paul Catholic Church in Damascus, Md., leads a Saturday service. He sanitized his hands and put a mask on before giving Holy Communion in front of tables with sanitizer. (Sarah L. Voisin/The Washington Post)

The Catholic Church, he said, was more legalistic in previous centuries, but for decades has emphasized a more “integrated view of maturity and pragmatism” that, he said, empowered laypeople more to make decisions about what’s good for them based on their own conscience, including about the obligation to attend weekly Mass. A lot of modern Catholics, he said, don’t really realize that obligation is still in place.

While Murphy has been going to Mass with his family since last summer — and said he feels “overjoyed” to receive communion in person — he knows people who are “die-hard” Mass attenders who still haven’t returned out of fear of the virus. He thinks bishops in their announcements should have made explicit statements encouraging people to weigh their mental health.

The D.C.-area bishops said the obligation doesn’t apply to the sick or those who are confined in their homes or a medical facility “or those with serious underlying health conditions. One should consult his or her local pastor if questions arise about the obligation to attend Mass.” The archdiocese of Portland, Ore., in mid-May said the dispensation hadn’t been lifted, but “all who are able are encouraged to attend Mass. Those who are vulnerable or concerned about the risks of the pandemic are not obligated to attend.”

The bishop of Tyler, Texas, lifted it in March, “aware of the centrality of the Mass to our lives as Catholics and the obligation attached to it.” However, Bishop Joseph Strickland wrote, that doesn’t apply to people who are sick, high-risk, caring for others who are homebound, pregnant, “or if you have a significant fear or anxiety of becoming ill by being at Mass.”

Faith leaders are between a rock and a hard place, said the Rev. William Gurnee, pastor of St Joseph’s on Capitol Hill.

“We naturally want people back to Mass because it will help their spiritual lives. We worry about people who are genuinely afraid of the virus and think the Church isn’t taking their concerns seriously,” he wrote in an email “But we are ready to welcome people back to regularly attending Mass. Most pastors think that if this situation persists, it looks like we think the Sunday obligation is optional. We have to obey God’s commandment for our own good.”

Jennifer Janus, who works in development for a Catholic school outside Richmond, has been going in person on Sundays with her husband and three children since the fall whenever she could get a spot online. Her mother is elderly and devout but won’t return in person until she feels completely safe, in part based on the infection rate in the county where she lives — not based on the dispensation being lifted.

“You can completely feel the difference between watching it on TV compared with being there in person,” she said. Part of “being the body of Christ,” she added, is being together.

Barbara Carroll, who used to live and attend church in Rockville, Md., but now lives in North Carolina, said she’s been a lifelong regular Mass-attender, but has shifted during the past year after “participating in Masses from all over the world” that she finds inspiring and challenging. Committing to one now seems limiting, she says, and bishops trying to frame her decision in negative terms is “another example of the church ignoring culture and the benefits of technology.”

Attending big Masses in person, she says, in hindsight feels less like a “community event” than does the creation of a faith community that participates in community service together, “mostly without priestly participation,” she wrote in an email.

Jeannie Kirkhope, who runs a Catholic advocacy group focused on issues in Appalachia including the environment and poverty, said the lifting of the dispensation is “frustrating” in West Virginia, a state with less than 35% of people fully vaccinated.

“It seems we’re being told to reaffirm the importance of the collection basket instead, which doesn’t bode well for many Catholics here,” Kirkhope wrote in an email. “The concerned folks here are making their decision with a fully informed conscience rather than out of any sense of obligation.

Monsignor Edward Filardi joined his parish in Damascus, Md., just south of Frederick, last summer, so he’s just now meeting some congregants in-person - and seeing others maskless for the first time. On the topic of the virus and in-person worship, congregants are all over the map, he says.

Filardi questions how many Catholics even know Sunday Mass is obligatory. Some parents have told him the obligation’s return helps them get back to church kids who cite the dispensation (in their pajamas). His view of the livestream was that it was only there during the shutdown and he plans to end it by the close of June.

The year has been a “fascinating experiment in progress and also human nature, what it needs, what fulfills it. This year has been a guessing game. I think sociologists will study it for years to come.”