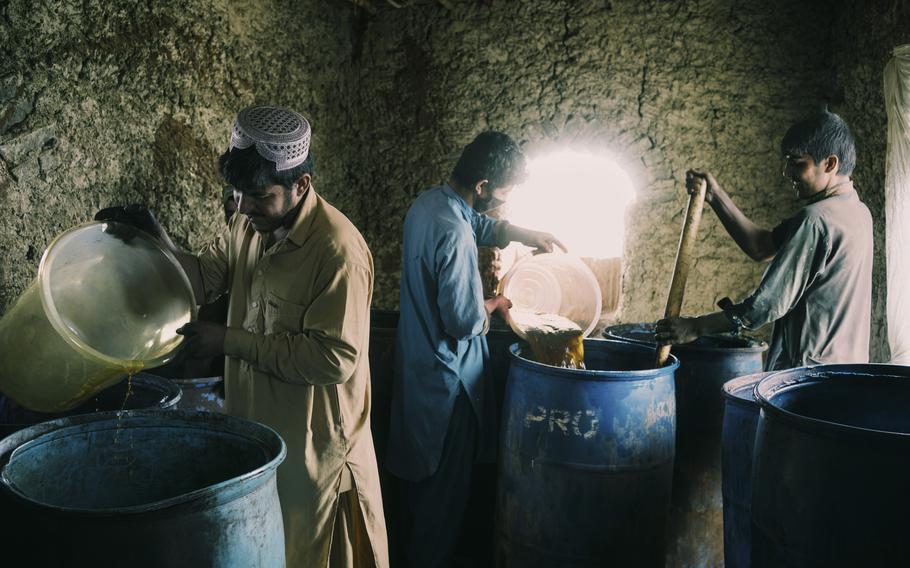 Ephedra power is mixed with chemicals in one of the steps to produce methamphetamine in Farah province, Afghanistan, on March 19. (Lorenzo Tugnoli/The Washington Post)

One of its most bustling hubs, some five hours west of Kandahar, can only be reached by miles of dirt tracks that lead to a row of dusty shops topped with Taliban flags. Wholesalers like Abdulwadood work openly here, moving dozens of kilos of methamphetamine every week.

In the middle of his crowded shop, he casually tosses a half-kilo bag of long glassy shards onto the carpet. Its street value in Europe is tens of thousands of dollars. Abdulwadood will sell it for about $250.

"Every year, sales and production just increase and increase," he said, speaking on the condition that only his first name be used to discuss the illicit drug industry. Behind him the rest of his stock was piled in a corner. He expected to sell the roughly 20 kilos of shisha — the Afghan term for meth — in just a few days.

For decades, the country has been a global hub for opium production, estimated to supply 80% of the world's opiate users. Now its meth industry is growing at breakneck speed, stoking fears among Western experts and officials that, under the Taliban, Afghanistan could become a major supplier as demand rises globally.

Hundreds of meth labs have appeared in Afghanistan over the past six years, according to independent experts, former government officials and drug traders. And more are being built each month as the country's economic crisis forces Afghans to find new sources of income. The vast majority of meth produced is for export, but an increasing number of Afghans are turning to it as their drug of choice.

The sudden boom in meth production came after drug traffickers discovered a potential bonanza in a native plant called ephedra — known here as oman — which grows wild and is a natural source of the drug's key ingredient.

"These labs have been extremely busy these last few months, as a consequence of the sheer amount of ephedra that passed through," said David Mansfield, an expert on Afghanistan's illicit economy who has produced reports for the World Bank and European Commission, drawing from on-the-ground investigators, aerial imagery and other sources.

Sellers at the meth bazaar in rural western Afghanistan have long been free to ply their trade. The previous government largely turned a blind eye, said Abdulwadood, and the Taliban have taken the same approach since coming to power. Though Taliban fighters sometimes inspect the market, they have not tried to shut it down.

"The only reason we are in this business is because there are no other jobs," Abdulwadood said. "Of course, if the economy gets worse, more people will start producing shisha."

The Taliban issued its first formal ban on the growing, production and distribution of illicit drugs several weeks ago. Yet there is widespread skepticism that the new leadership will eliminate a source of hard cash at a time when the country is almost entirely cut off from the global financial system. 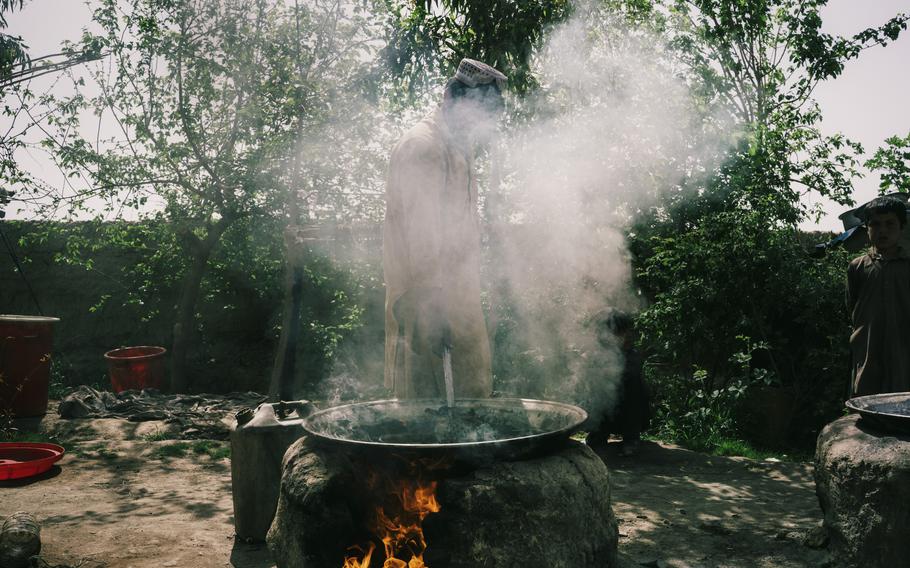 Chemicals are boiled together with ephedra powder in order to produce methamphetamine in Farah province, Afghanistan, on March 19. (Lorenzo Tugnoli/The Washington Post)

"A significant part of the Taliban's revenue comes from taxing illicit commodities, and drugs is one of those," said Andrew Cunningham, who heads the drug markets, crime and supply reduction branch at the E.U.'s European Monitoring Center for Drugs and Drug Addiction.

"It's impossible to provide even the most basic of services unless there's money coming into the government coffers," Cunningham noted. "So, for them to do something about a drug trade that creates some of those revenues is something we see as quite unlikely, at least at present."

The country's new deputy minister for counternarcotics insists otherwise. Before taking control, Abdul Haq Hamkar said in an interview, the Taliban did not have the resources to stop the drug trade as well as fight U.S. and Afghan government forces. (According to a United Nations study, money from the opium trade helped fund that fight, generating up to $113 million in annual tax revenue for the Taliban and its allies in 2019 alone.)

"Let me be clear that from now on," Hamkar said, "no one in any part of the country will be allowed to cultivate or produce either oman, or heroin, or hashish, or opium."

During nearly 20 years of war, U.S.- and NATO-led efforts to eradicate opium production in Afghanistan were found to be some of the least effective and most wasteful operations, according to a number of internal reports, including by the independent U.S. watchdog, the Special Inspector General for Afghanistan Reconstruction.

"They use the same trucks and the same routes," said a businessman at the bazaar in Bakwa about the men who come to collect his product. He spoke on the condition of anonymity to discuss the trade.

Cooking meth with harvested ephedra in Afghanistan — while labor-intensive and dangerous — costs a fraction of the price as making the same drug with ephedra extracted from pharmaceuticals, the process used to produce the vast majority of the world's meth.

Afghan meth once struggled to compete globally. "But then all this ephedra was discovered, growing wild in the mountains," said Sara Hakimi, a former Foreign Ministry official specializing in counternarcotics. "You could just take it, dry it and sell it."

Drug enforcement agencies in Europe fear cut-rate Afghan meth could flood their capitals given the drug's growing popularity, Cunningham said: "We're quite concerned in Europe, because crystal meth, like heroin and crack, is one of the really harmful drugs that you especially want to avoid." Kabul’s largest rehabilitation center is now caring for nearly twice as many people as it was designed to treat. (Lorenzo Tugnoli/The Washington Post) Afghans gather under a bridge in Kabul to buy and use drugs. Meth addiction is increasing, and drug treatment centers are overwhelmed. (Lorenzo Tugnoli/The Washington Post)

Afghanistan's meth production was on the rise even before the collapse of the U.S.-backed government last August.

Ghousaddin is a farmer in western Afghanistan, in the same stretch of desert as the Bakwa bazaar. In 2019, he was approached by Iranian businessmen about building a meth lab on the edge of his fields. The men offered to teach him the process and provide the needed chemicals and the dried ephedra plant in exchange for a large cut of his profits. Years of little rainfall had left him struggling to support his family. So he agreed.

His makeshift lab consists of a simple grain thresher beside a row of mud sheds. After the ephedra is ground and sifted into a fine dust, it's mixed in waist-high vats of chemicals before being boiled down over an open flame, laid out to dry in the sun, then mixed with another chemical compound that changes the white powder into glasslike crystals.

Ghousaddin's income from meth has allowed him to keep food on the table and save for his sons' future marriages. He believes there was no other way to survive. "Even poppy wouldn't grow here," he said, kicking at the dusty earth.

The amount of raw materials sent to him increases every year, as more and more people are drawn to harvesting ephedra.

"Everyone was up in the mountains for the ephedra harvest in August and September — ex-army people, ex-police, everyone — because it is the only source of income in some of these highland areas," said Mansfield, the expert on Afghanistan's illicit economy.

The country already had some of the highest rates of opiate addiction in the world, according to the latest U.N. data.

Many addicts use openly in central Kabul, in narrow median strips along busy streets or in alleyways. But the main place to buy and use drugs is in the city's west, beneath a bridge in a dried-out riverbed. Patients of the rehabilitation center for drug addicts in Kabul lay on beds in their first period of detoxification. (Lorenzo Tugnoli/The Washington Post) 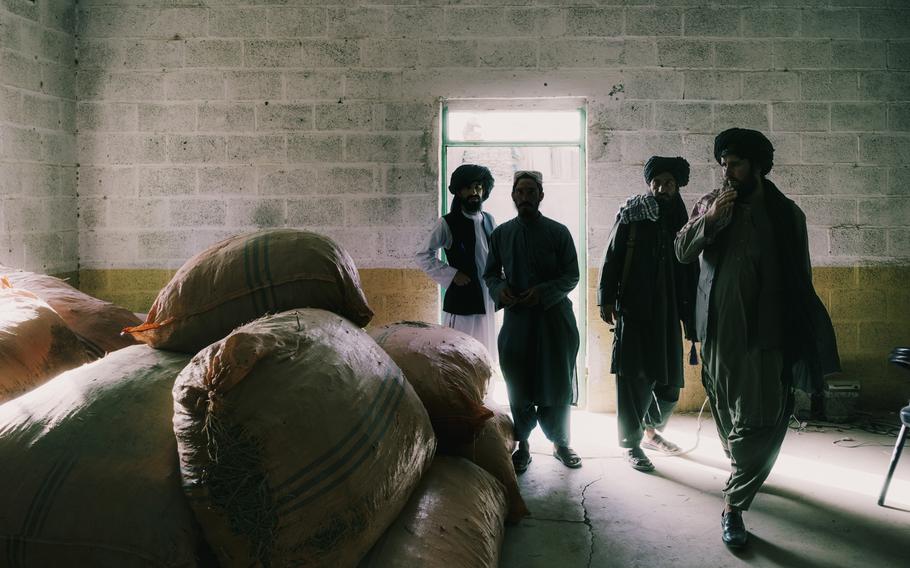 Taliban fighters enter a warehouse filled with sacks of ephedra plants that they have confiscated in Farah province, Afghanistan, on March 18. (Lorenzo Tugnoli/The Washington Post) 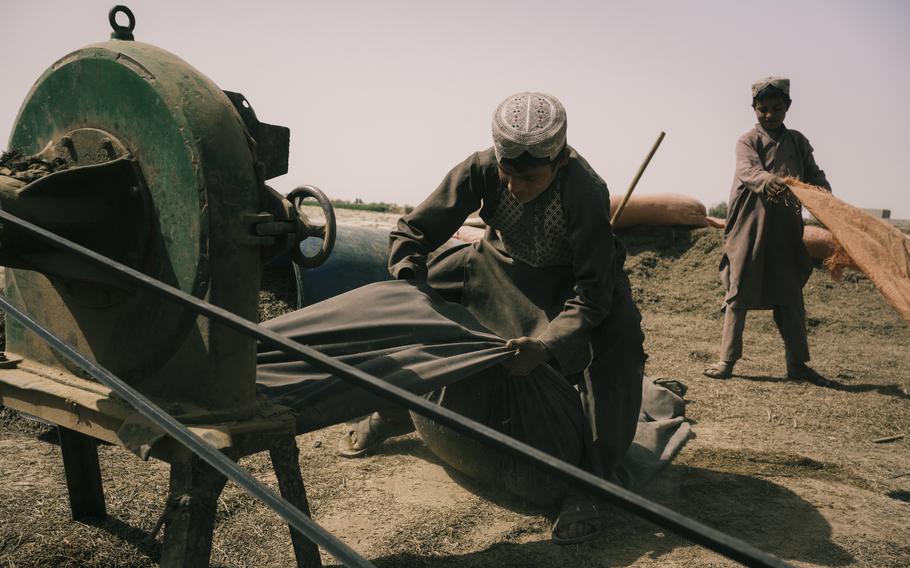 Children and workers stand around a machine used to grind the ephedra plant into powder in Farah province, Afghanistan, on March 19. (Lorenzo Tugnoli/The Washington Post)

When the Taliban took power, they cleared hundreds of people from the area. The users and dealers eventually returned, and today doctors at Afghan drug treatment centers say their overwhelmed facilities are receiving more and more meth patients.

Kabul's largest rehab center is a cluster of stark warehouselike buildings. The facility is caring for nearly twice as many people as it was designed to treat. Doctors often run out of the medication needed to help addicts detox.

Jamal Abdulnai Nasiri, 60, has worked in drug rehabilitation for more than two decades. "We probably receive three times as many meth addicts now than three years ago," he said. "We are doing our best with what we have."

A few dozen patients, rail-thin from years of drug abuse, loitered outside after lunch. They began telling their stories.

Muhammad Faqiri said he started using meth after he lost his job as a translator for U.S.-led forces and began driving a taxi in Kabul to support his family.

"I noticed my friend was smoking this thing that allowed him to drive really fast," he said. Initially, meth helped Faqiri work long hours, but addiction cost him his job. Then his family kicked him out.

Nasiri consoled him, telling him he would be free to leave soon. Once out of earshot, though, the doctor lamented that those discharged rarely remain away for long.

"Almost all of them," he said, "return over and over."

The Washington Post's Aziz Tassal in Houston contributed to this report.