Boys in Afghanistan are becoming breadwinners for their families 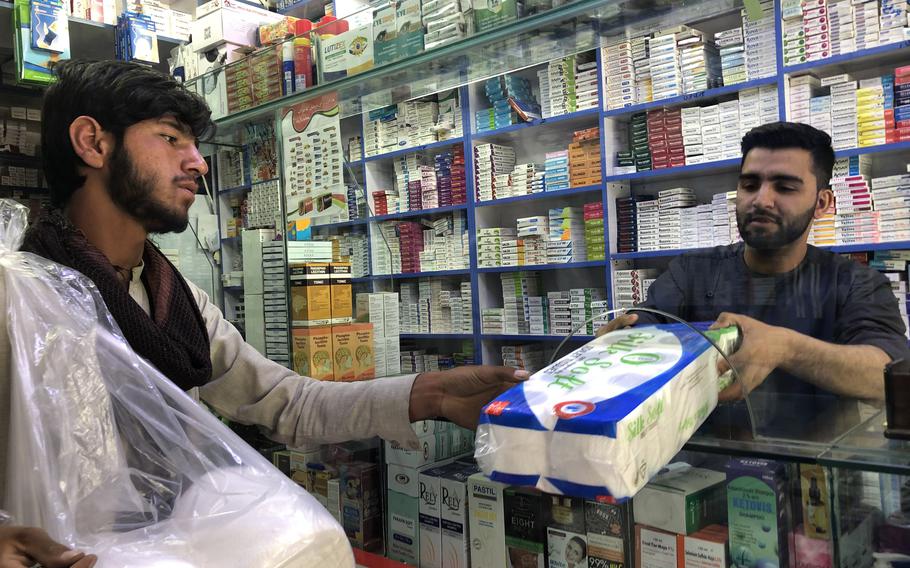 KABUL, Afghanistan - Nine months ago, Karzai Balochkhel was a 10th-grade student, learning math, physics and even a bit of art history. Today, he is an itinerant peddler, selling paper towels door to door and learning how to haggle over pennies. On a good day, he can make about $4, just enough for his family to eat that night.

At 16, Karzai is among thousands of students who have had to drop out of school or cut classes to work since the Taliban takeover in August. With almost no foreign aid entering the country and many adults jobless, more and more school-age boys have become breadwinners for their families.

In Kabul, war and poverty have long created a permanent underclass of child beggars, scavengers and shoeshine boys, but their numbers have soared in recent months. Today, boys of all sizes roam the streets of the capital, toiling in markets and garages and trash dumps.

While the Taliban government has provoked international outrage for banning girls from secondary school, it has encouraged boys to get an education. Azizur Rahman Rayan, the education ministry spokesman, said 6 million boys are currently in school, as well as 2.7 million girls, although The Washington Post could not verify those figures.

In Kabul, some boys attend school in the mornings, then work in the afternoons. At a nonprofit program called Aschiana, more than 1,500 working boys take morning classes and eat lunch before they hit the streets. Yousef Nawabi, the longtime director, says the need has skyrocketed in recent months.

"The rich have left, the somewhat poor have become more poor, and the very poor are desperate," Nawabi said. During the past two decades, he noted, international funds poured in for social programs, many focused on children. "Now that has all stopped." 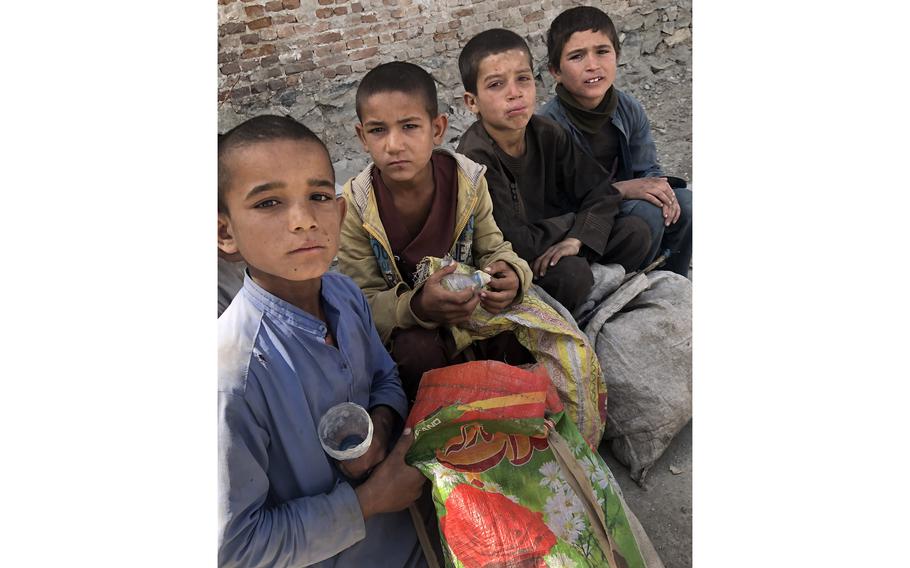 Four young boys take a break from scavenging for cans and bottles in Kabul on April 14. (Pamela Constable/Washington Post )

For boys like Karzai, who grew up in an era of rapid modernization and rising expectations for Afghan youth - with new schools built across the country and private universities flourishing - being forced into menial work has been especially hard. His younger brother Shahid, 14, also had to leave school and accompanies him on his daily rounds.

"I am trying to keep my brain alive, but every day I carry a stone on my shoulder," Karzai said.

One day last week, the brothers headed into the city early, sharing a taxi for 10 cents. They stopped at a supplier, where they picked up plastic sacks of kitchen and bathroom rolls on credit, then plotted their route. First they hit a busy market in middle-class Khair Khana, holding up their wares at the doorways of mobile phone dealers, beauty parlors and appliance shops. Not once were they invited inside.

As they threaded their way among crowds of shoppers and beggars, they repeatedly encountered possible customers who looked well-dressed but said their asking price of about $1.10 per roll was too high, even when they offered to accept less.

Along the way, Karzai passed several restaurants where he had once made regular sales. Now they were all closed for the month of Ramadan, which also required the brothers to walk all day without eating or drinking. "It's hot, and it's especially hard on my brother," he said.

Next they tried a block of brightly lit jewelry emporiums, but a guard shooed them away. Finally, a man changing money at a sidewalk table said he would buy a roll of toilet paper. The brothers exchanged quick smiles. The man, 35-year-old Najib Bashir, asked about their situation, then laughed ruefully and switched to English.

"I'm in the same position they are," he said. Before the Taliban takeover, Bashir had worked as a security coordinator for the World Bank. But the bank shut down its office in Kabul and he was left jobless, with a wife and four children, hoping in vain for a foreign visa. Now, he makes little more than $4 a day. "It's not enough, but what choice do I have?" he said.

The brothers decided to try another neighborhood with several hospitals and drugstores. Karzai said pharmacists often needed paper towels, but on this day only one, Murtaza Khaleqe, asked for a roll, frowning at the price. Since the change of government, his business has fallen by 70%. "People get prescriptions, but they can't afford to fill them," he said.

Half an hour later, the brothers spotted another boy coming toward them, carrying identical plastic sacks of paper towels over his shoulder. They exchanged greetings, but it was an awkward moment. "Everyone's getting into this business now," Karzai said with a sigh.

After about four hours of walking, they decided to call it quits. Their total take was 400 Afghanis, about $4, minus the commission they had to return to the supplier. Asked why they didn't try to sell their products nearer to home, Karzai shook his head firmly. "Nobody in our area uses paper," he said. "That's only for rich people." 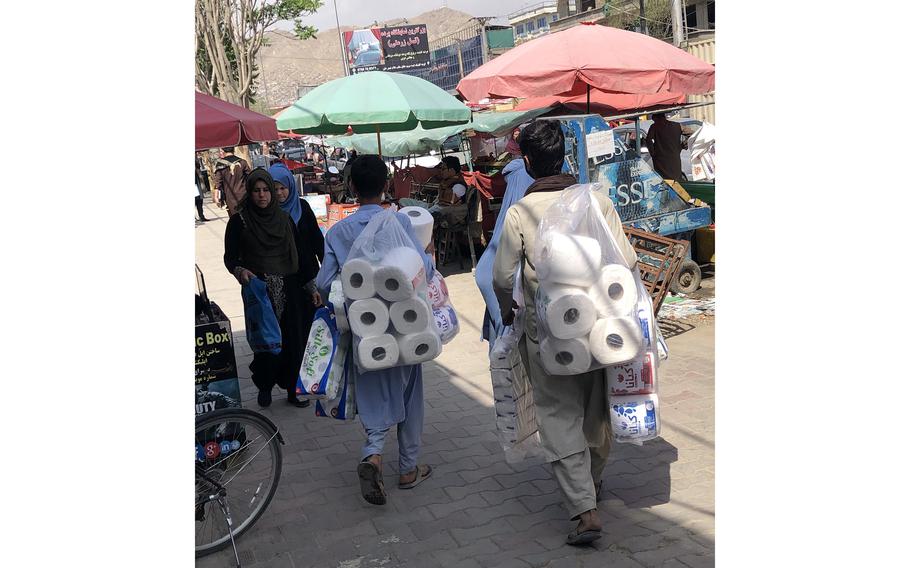 Karzai Balochkhel, 16, and his brother Shahid, 14, search for customers as they peddle paper towels door to door. (Pamela Constable/Washington Post )

Shahid, who had a headache from walking in the sun, said there was another reason. "People there laugh at us and call us bad names," he said. "But we have to keep going. If we come home with some money for food, our parents are happy. If we don't, they are upset. That's the only thing we think about all day."

The Balochkhel family home is a small rented house in Pul-i-Charki, a district of dirt streets and crowded markets in eastern Kabul. The front door looks out on a stony vacant lot. The rooms are mostly empty, the walls bare.

The boys' father, Yusuf, was once a police officer, taking home more than $200 per month. But he lost his job when the Taliban took over, like thousands of other government workers, and has been unable to find work since. Their two older brothers fled to Pakistan, where one washes cars and the other sews tunics.

The family is almost totally dependent on Karzai and Shahid, whose earnings are not enough to pay the rent, and often not enough to buy more than rice and lentils for dinner. The decision to pull them out of school was a last, desperate resort.

"You cannot know the sadness that has stayed in my heart, because I had to take them away from their studies," said Yusuf, 45, wringing his hands in distress as he sat in their front room. Ten years ago, he moved his family from their ancestral village to the capital, just so his younger sons could get an education.

"We had enough to live on. The boys were doing well in school. We had no worries," he said. "Then, in just one day, we lost everything."

After supper, Karzai said, he sometimes leafs through his old school books - partly to fend off feeling depressed, partly to see if he can retain some of his lessons. That evening, he couldn't find his physics textbook, so he brought out his Pashto language workbook. One section was about European art, illustrated with copies of paintings by Rembrandt, Jean-François Millet and Leonardo da Vinci.

"I like looking at these things, but it makes me sadder," he said. "Maybe it's better if I don't try to remember at all."