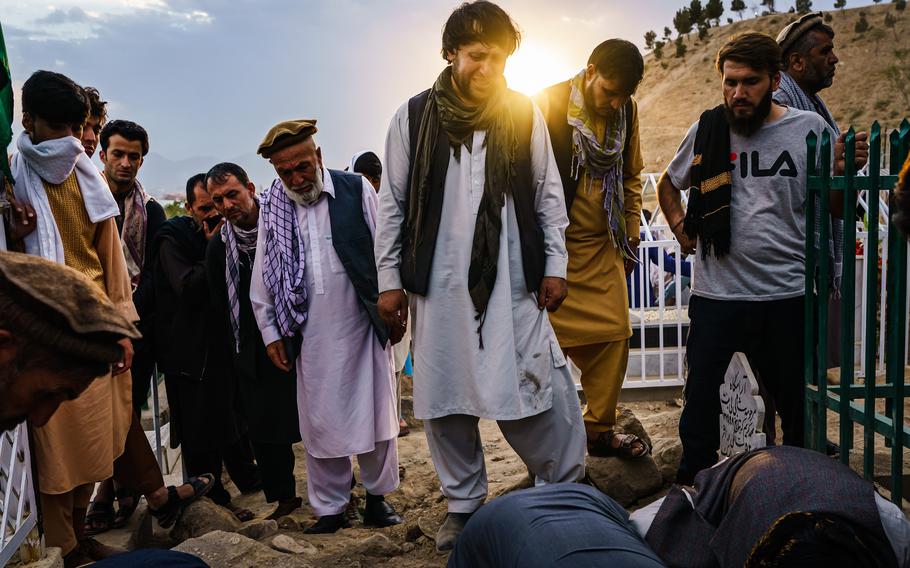 Ajmal Ahmadi grieves for his family, all 10 civilians who were killed in a U.S. drone strike in Kabul, Afghanistan. (Marcus Yam, Los Angeles Times/TNS)

KABUL, Afghanistan (Tribune News Service) — Emal Ahmadi and his older brother Zemari Ahmadi were inseparable. They’d sit on the plush red and tan rug in their shared living room and eat meals together, discussing family, work and the distressing changes shaking their country as U.S. troops began evacuating and the Taliban rode to power.

“He was a good man,” said Emal, cracking a brief smile while recounting how Zemari loved to sing popular Afghan songs at parties.

As an aid worker for a California-based charity, the 40-year-old Zemari was also the family’s breadwinner. When he was errantly killed along with nine other family members in a U.S. drone strike in August, Emal took some solace in comments by American officials that they were considering paying compensation.

But six weeks after he lost his brother, Emal said he has yet to be contacted by the U.S. government to apologize or to offer help. A jobless father in a battered land — his 3-year-old daughter Malika was killed in the blast — Emal is struggling to provide for an extended family of 15.

“Why are they not contacting us? Why are they not reaching out to us? We lost 10 members of our family. It’s very difficult for me, for our family, for all of us,” said Emal, 32, standing in front of the charred remains of a car in the family compound near Kabul that the U.S. military mistook for a vehicle used by an offshoot of Islamic State, known as ISIS in Khorasan, or ISIS-K.

“I’m so angry, I’m so sad,” added Emal, who is also requesting the U.S. help his family relocate to safety. 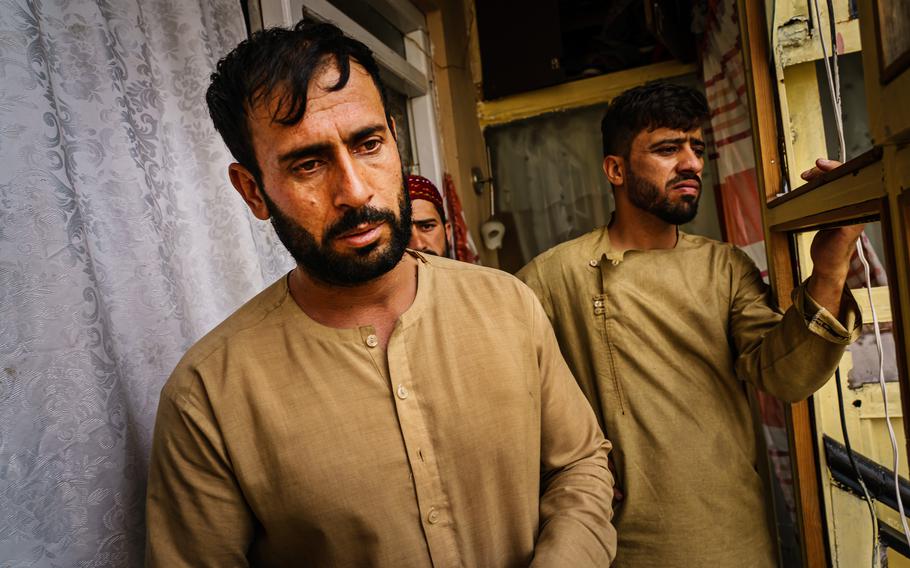 Emal Ahmadi, left, looks off into the distance as relatives around him try to provide support after a U.S. drone strike killed members of his family in Kabul, Afghanistan. (Marcus Yam, Los Angeles Times/TNS)

Gen. Kenneth F. McKenzie Jr., head of U.S. Central Command, which oversees the Afghanistan operation, offered “sincere and profound condolences” to Emal’s family in a news conference on Sept. 17. He said the U.S. was exploring the possibility of an ex gratia payment, but suggested it was difficult to reach people in Afghanistan now that American troops had left.

Central Command did not respond to a request for comment and an update on plans to pay Emal’s family.

McKenzie said the strike was launched because the military believed there was an imminent terrorist threat to U.S. forces at Kabul’s airport, where tens of thousands of people were fleeing the Taliban’s takeover of Afghanistan in a chaotic and deadly evacuation. Days earlier, 13 U.S. service members were killed in a suicide bombing outside the airport.

Zemari, who worked for 16 years for the Pasadena-based nonprofit Nutrition & Education International was killed when a drone fired a Hellfire missile at his white Toyota Corolla. Seven children were among the victims. McKenzie called the attack a “tragic mistake.” It was a horrific final act, and its chaotic nature seemed to distill two decades of America’s failure to build a stable Afghan government.

The admission of error so soon after the incident was unusual and likely prompted by the intense media attention, experts tracking civilian deaths in conflict zones said.

The U.S. has a poor track record awarding condolence payments to noncombatants. Not a single offer of monetary compensation to civilians was made in 2020 despite Congress allocating $3 million in funding each year to compensate those harmed by U.S. military operations anywhere in the world. Independent estimates suggest that about 71,000 noncombatants were killed in the Afghanistan war since the U.S. invaded in 2001.

“When it comes to ex gratia payments specifically, once the U.S. investigates and confirms civilian casualties, the decision to offer an ex gratia payment is a matter of commander’s discretion,” said Annie Shiel, a senior advisor for U.S. policy at the Washington-based Center for Civilians in Conflict.

“In a case like this one,” Shiel said of Emal’s family, “where civilian harm has already been confirmed and where the identities of survivors are known and they are reachable by the U.S. government, it should just be a matter of just making the decision to offer a payment.”

Emal said the only officials who have spoken to him about the strike were three Taliban members who visited his home to inform him of the U.S. apology after McKenzie’s news conference.

He fears for the safety of his surviving family and other Afghan civilians as political instability widens, sectarian violence intensifies and the U.S. adopts an “over the horizon” counter-terrorism strategy that relies heavily on drone strikes.

“I have no doubt more people will die the way my family members died,” Emal said. “If we are to avoid what my family has gone through, we need a working government. There should be rule of law and accountability. But if this continues, more families will suffer.”