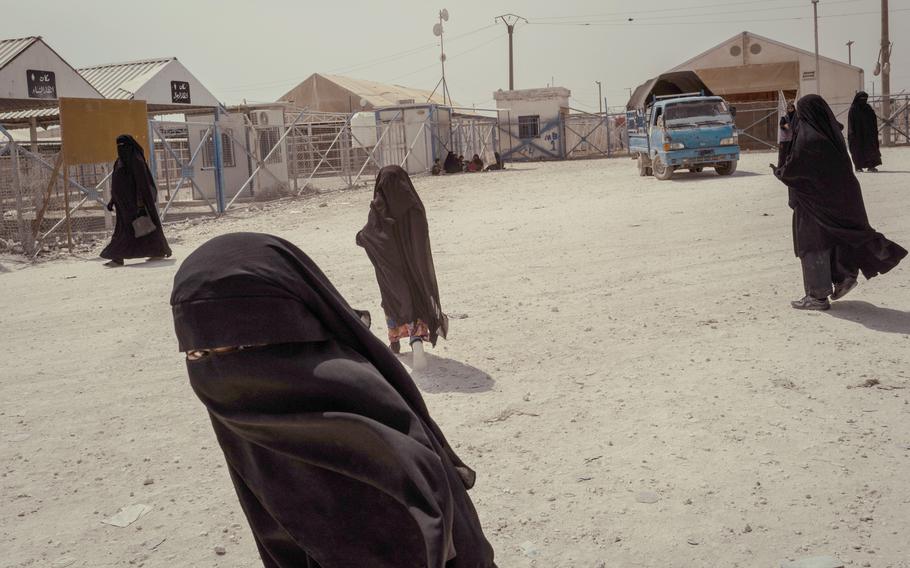 Syrian and Iraqi women are seen near the market in al-Hol, a camp housing displaced people in Hasakah province in northeast Syria. (Nicole Tung//for The Washington Post)

AL-HOL CAMP, Syria — The killings have taken on a creeping sense of inevitability, guards say. No one admits to hearing them, let alone knowing who is responsible.

On a recent morning, officials inside al-Hol detention camp said it was still too dangerous to try recovering the latest pair of corpses discovered overnight. “We’re still investigating,” said an exhausted camp guard, slumping in her office chair, her shirt rumpled and ponytail messy after a night without sleep.

Since January, officials report, more than 70 people have been killed inside northeast Syria’s al-Hol camp, which houses 62,000 family members of Islamic State fighters and others detained during the collapse of its self-declared caliphate more than two years ago.

Al-Hol has become an ever more dangerous and desperate place. Religious militancy is on the rise, imperiling those who are not as fanatical. Killings are often blamed on hard-line women who take advantage of the fragile security to enforce their strictures and settle scores. Security sweeps to confiscate handguns, knives and other weapons have made little difference, according to officials at the camp, which is run by the Kurdish-led Syrian Democratic Forces. Tensions between captives and captors are boiling.

Mohamed Bashir, a supervisor for some of the guards, furrowed his brow as he ticked off recent attacks on his fingers: Ambushes against troops. Rocks thrown at aid workers. A gold shop, just outside his office on the edge of the communal market, was ransacked in July. Women in the camp often need money to buy provisions and, sometimes, to pay smugglers to get them out.

“They took gold; they took dollars,” Bashir said, wearily placing a hand to his temple.

Hours later, another person was killed on the edge of the same market, local media reported, providing no other details.

In the swirling dust, there’s little left of the dreams once harbored by many of these detainees — Syrians, Iraqis and other foreigners from dozens of countries around the world — but vengeance and fear and a desperate wish to go home. Relatives of Warda Obeid, a 60-year-old grandmother from Iraq's Anbar province, carry her body to a cemetery near al-Hol camp. Her nephew Saken Obeid, at right, in white, said she had died of a heart condition for which adequate treatment at the camp was unavailable. (Nicole Tung/for The Washington Post)

Al-Hol was not built for this. It opened in the 1990s as a small camp for displaced Iraqis.

But as the final battle raged between the U.S.-backed forces and defenders of the ISIS caliphate in early 2019, and captured militants were carted off to prison, their families were brought here. Within weeks, the camp population was 55,000, and a humanitarian disaster was unfolding.

Worse was to come.

As spring turned to summer that year, aid workers struggled to cope and some of the camp’s most radical women started trying to reimpose the ISIS rules on the families around them. Among the most radical were the Iraqis, who now make up nearly half the camp’s population.

Women who removed their black face coverings were tried in kangaroo courts inside the tents. Signs of post-traumatic stress syndrome rippled through the camp’s children, who received little psychological support despite having survived terrors inside ISIS and violence outside it.

“What are we meant to do?” asked a 52-year-old Iraqi woman, who did not share her name. Two handbags stuffed with personal documents were slung across her black abaya. “You can’t just leave us here and hope that we die.” She said she had requested repatriation to Iraq but received no answer.

Other women on the market street were Syrian, and from all corners of the country.

“We need these people back home. We can’t cope with them here,” said Bashir, shuffling through a sheaf of identification papers on his desk. 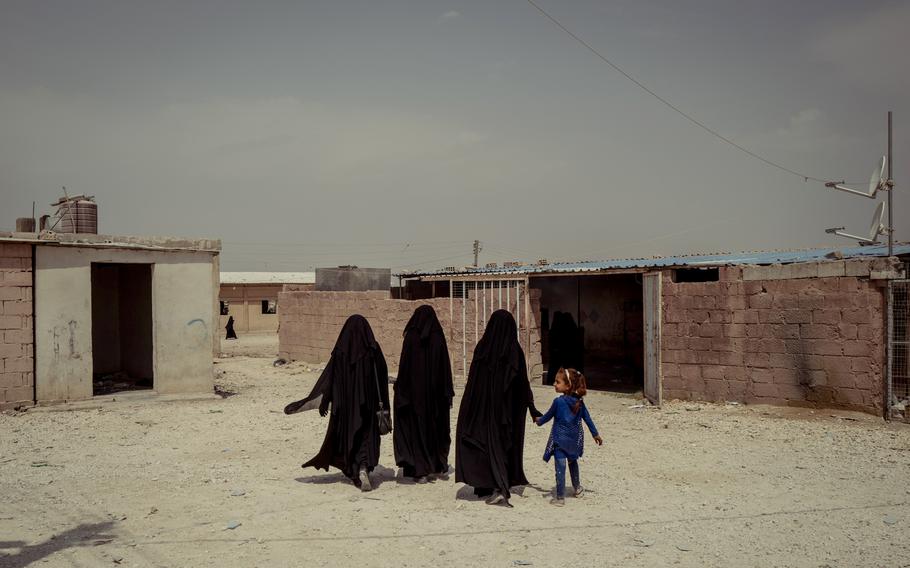 Three women and a child walk near the market in al-Hol camp. (Nicole Tung/for The Washington Post)

Most foreign governments have done little to bring their nationals home from al-Hol camp.

But efforts are underway by the Kurdish-led local authority and Arab tribes in this part of Syria to reduce the temperature inside the camp by sending Syrians home. Thousands of Syrian men, women and children have already departed the camp after local tribesmen vouched for the returnees, guaranteeing they could be reintegrated into their home villages and towns.

“No one else has the power to do this,” said tribal leader Sheikh Mohamed Turki al-Swiyan, interviewed in the northern city of Raqqa with a family he had helped to leave the camp. “Presidents rise and fall. Princes take up arms and kill each other. Only the tribes here are constants.”

But the process is riddled with problems. In some cases, officials said, tribal leaders have sponsored individuals they do not know or from outside their community, in return for payments from their families, and some of those returnees have since disappeared.

Many of the former detainees are coming back to communities still reeling from the Islamic State’s brutal rule and, in many cases, to neighborhoods battered by the war.

Members of three families that had returned to Raqqa, once the ISIS capital, described lives of destitution and ostracized isolation, saying their neighbors ignored or taunted them. Mothers from the local community are wary of letting their children play with the returnees. The doors of neighbors who once shared meals now stay closed.

“They should have provided us with help when we came back,” said Fatima Mustafa, 47, sitting on the floor of her family’s spartan home. Without work, many returnees are sinking deeper into debt.

“The neighbors saw that we were just women without our men. Surely they should have given us aid,” Mustafa said.

Elsewhere in the city, an older woman, Umm Shaima, whose daughter had returned from al-Hol, twisted her fingers between nervous hands as she spoke. “They can say what they like; we’re not hurting anyone,” she said as her grandchildren stood quietly in the doorway.

Residents of Raqqa interviewed nearby had little sympathy. “What do they expect?” asked one man, Mustafa Hamed, as he showed reporters around his home. It had been badly damaged in a U.S.-led coalition airstrike during the fight against the militants. A wire sparked and the ceiling sagged dangerously as his 7-year-old daughter Janna played below it.

Near the city’s main hospital, where the militants had once garrisoned, Hassan Mustafa shrugged when asked about the returnees. “They killed people and now we’re back here giving all we have to rebuild. You think we have time to think about them?”

His brother Ali agreed. “They should go back to their camp,” he said. “No one wants them here.” 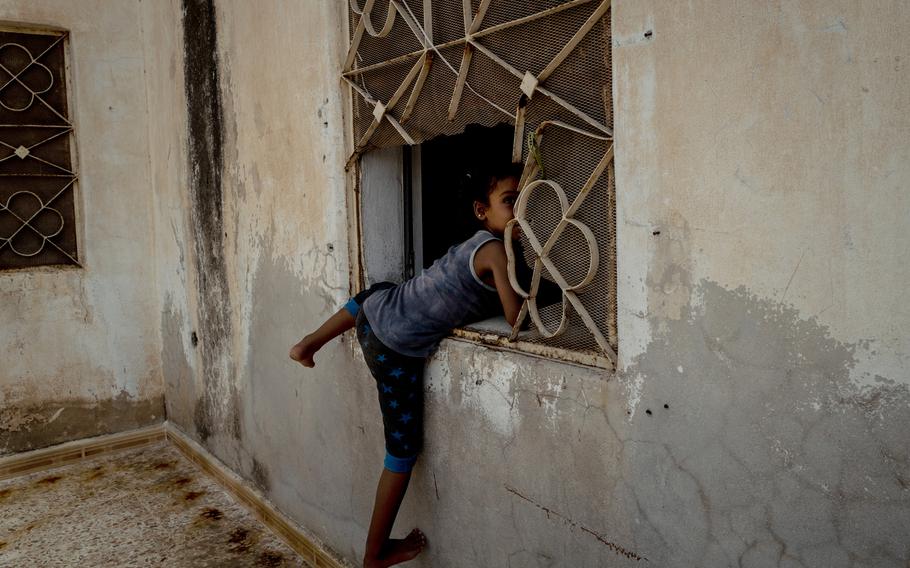 Shaimaa, 5, plays in a window frame at the home of her grandmother, Umm Shaimaa, in Raqqa. Shaimaa, her siblings and her mother, who is Syrian, were all brought back from al-Hol camp to Raqqa as part of a returnee program facilitated by tribal leaders. But children like Shaimaa, who was born to a Saudi father in the Islamic State, have no documentation and no official nationality, as citizenship can only be transferred through the father. (Nicole Tung/for The Washington Post)

The Iraqi government says it is trying to bring home its nationals held in al-Hol. But the initiative is so politically fraught in Iraq that the first major operation to repatriate them, earlier this summer, transferred fewer than 400 people, according to Iraqi officials.

Among those who had hoped to join them was Warda Obeid, 60, a grandmother from Iraq’s sprawling desert province of Anbar. But her health had deteriorated as the months of waiting wore on, her family said. Her diabetes worsened first. Doctors diagnosed a heart condition. Medicine was in short supply. Last month, she died.

Obeid was laid to rest on a rocky outcrop of land overlooking the camp. Her family dug the grave under a camp guard’s watchful eye.

Her body arrived on the back of a truck, wrapped in a fleece blanket.

“She just wanted to see Iraq again,” said her 50-year old nephew Saken, as his brothers and cousins dug the pit for her. “She was tired. She wanted to go home.”

On the horizon, a storm appeared to gather out of nowhere and before long, it was whipping up desert sand as the family dug faster and more frantically. Soon, the camp was engulfed.

Saken shook his head, hand on hip. “This place ...” he said, trailing off. The dust cloud grew nearer, its shape clear against the slate-gray sky. The family kept digging; a young man cursed.

“We can’t stay here,” Obeid sighed. “There must be a solution.”

The Washington Post’s Mustafa al-Ali contributed to this report.