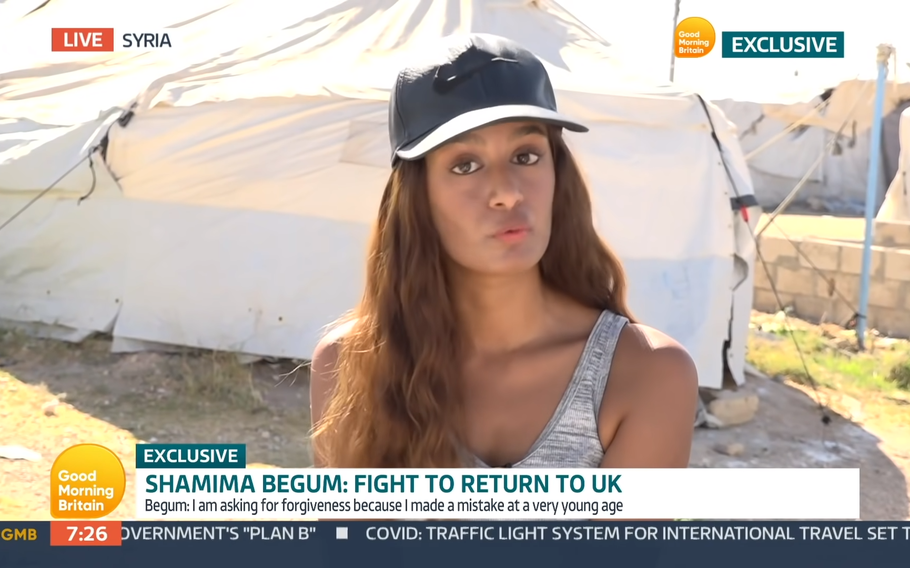 Shamima Begum, the 22-year-old woman who left Britain as a teenager in 2015 to join the Islamic State in Syria, has appealed to the public for forgiveness and offered to help the government fight terrorism if she is allowed to return home. (Screengrab from Good Morning Britain YouTube)

LONDON — Shamima Begum, the 22-year-old woman who left Britain as a teenager in 2015 to join the Islamic State in Syria, has appealed to the public for forgiveness and offered to help the government fight terrorism if she is allowed to return home.

Begum was 15 when she, along with two school friends, boarded a plane from London's Gatwick Airport to Turkey — where they then traveled to the Syrian border. Less than two weeks after arriving in the country, Begum married a man later convicted of terrorism offenses.

In a live interview with ITV's "Good Morning Britain" on Wednesday, Begum asked the public to forgive her decision, saying that when she left British soil to join ISIS she believed she was "doing the right thing as a Muslim."

Speaking from a detention camp in Syria, she said she did not realize that the group was a "death cult" and that it had never been her intention to hurt anyone.

In 2019, Begum, who was born in Britain, was stripped of her citizenship by the government — sparking global debate over whether countries should take back foreign fighters who many argue pose a significant risk to national security.

"I tell you from the bottom of my heart that I regret every, every decision I've made since I stepped into Syria, and I will live with it for the rest of my life," she said, adding that she would rather be killed than rejoin the terrorist organization.

In a 2019 interview with Sky News she had said she had no regrets about joining the extremist group.

Begum maintained on Wednesday that she did not carry out any crimes and that her decision was poorly judged because of her age at the time. She argued that if the authorities truly believed she was guilty, she should be allowed to return to Britain to face trial.

She went on to say that she believed she could help Britain fight terrorism if allowed to return.

"I want to help," she said. "You clearly don't know what you're doing."

In the years since she left London, Begum has often shown little remorse for her actions — once saying that the Manchester Arena suicide bombing was "fair justification" in response to coalition airstrikes that killed Syrians.

The 2017 attack, which was carried out at an Ariana Grande concert in England, killed 22 people and injured over 116 — many of whom were young women.

Speaking on Wednesday, Begum said she was sorry to those affected by the attack.

Sajid Javid, who was Britain's Home Secretary at the time Begum's citizenship was revoked, said Wednesday that the government stood by its decision and that the safety of citizens remained its priority, the BBC reported.

Under British law, the home secretary can revoke citizenship if it is "conducive to the public good" and if it does not make a person stateless. The government has argued that Begum is eligible for Bangladeshi citizenship.

However, while Begum has Bangladeshi roots, the Bangladeshi foreign ministry said in a 2019 statement that she was not a Bangladeshi citizen and had never visited the country.

"There is no question of her being allowed to enter into Bangladesh," the statement said.

Since moving to Syria, Begum has given birth to three children — all of whom have been lost to illness.