Down but not defeated, thousands of ISIS insurgents wage Syrian fight anew A member of the commandos unit of the Syrian Democratic Forces stands on a sand berm in the eastern part of Syria's Hasakah province during what was thought to be a security threat on the road between Raqqa and Dashisha on Aug. 3. (Nicole Tung/for The Washington Post)

DASHISHA, Syria — The pair of young women had been missing for hours when troops searching for them heard gunshots in the desert night. Two quick booms, then two again. They found the bodies by the roadside.

Staring down at them, soldiers from the Syrian Democratic Forces had no doubts about who kidnapped the women, both local government workers, and shot them dead. “These killings were a message to everyone,” the SDF commander, Shvan Selmo, recalled thinking.

The slayings near the remote, sun-scorched village of Dashisha bore the hallmarks of the Islamic State.

Two and a half years after its self-declared caliphate was extinguished amid a blitz of U.S.-led coalition airstrikes in the palm groves of Baghouz, further to the south, the militants in northeastern Syria are down but not defeated. They have melted back to their insurgent roots, seeding sleeper cells across the region, as well as in neighboring Iraq, and using improvised explosives and small arms to target security forces and government employees.

This part of Syria is run by a Kurdish-dominated authority and secured by the SDF, a force armed and trained to carry the fight against ISIS. Some 900 U.S. troops are still in the area, patrolling oil infrastructure and supporting the SDF in its operations against the jihadist group.

The U.S.-led coalition estimates that between 8,000 and 16,000 ISIS fighters still operate in Syria and Iraq. And with the militants digging in for the long haul and young men still being recruited, though on a smaller scale than before, local officials now watch their backs as they work. In the rural communities, fearful residents turn a blind eye when fighters come out of the desert.

The militants who dragged Hind Latif al-Khadir, who was about 20, and her friend Sa’da Faysal al-Hermas from their homes early this year, trucking them through the desert and to their deaths, had seemed confident that no one would even track them.

One of the ISIS fighters, a teenage recruit named Ibrahim, had boasted days earlier that they felt untouchable. “We move freely here,” he told his cousin, according to voice messages shared by the SDF, which said they had been recovered from the young man’s phone. “Don’t worry, nobody even knows who we are.” 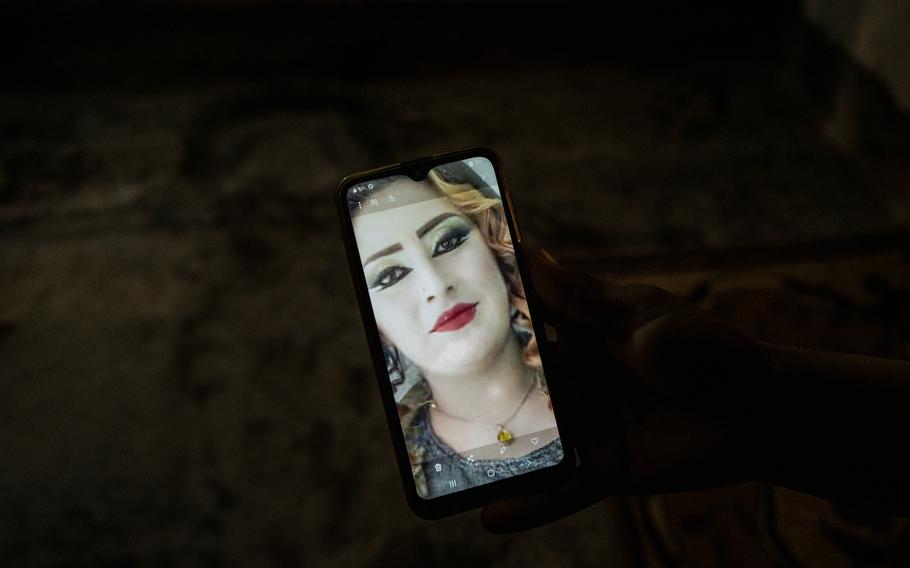 A photo of Hind Latif al-Khadir is shown on a cellphone by her sister at their home in Dashisha. (Nicole Tung/for The Washington Post) 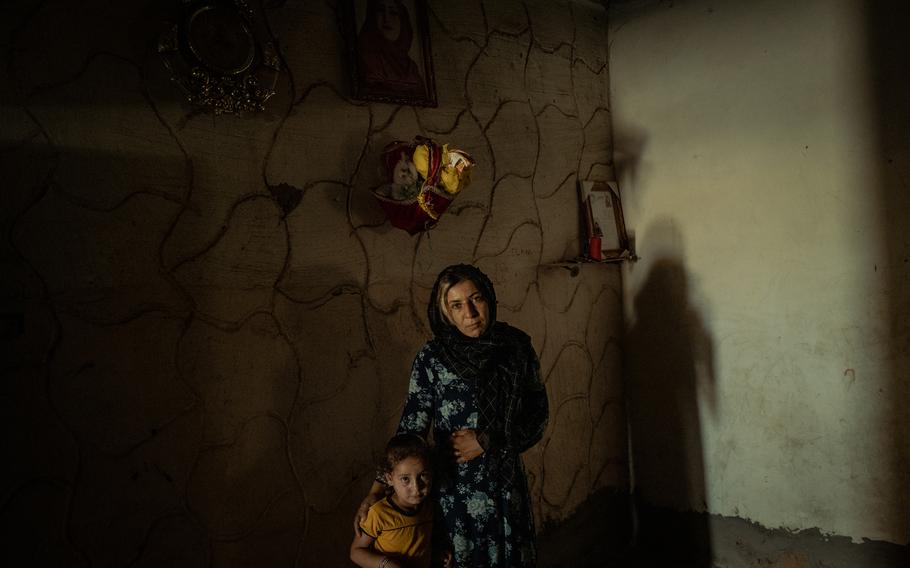 An 18-year-old suspect in the killings of Hind Latif al-Khadir and Sa'da Faysal al-Hermas is seen in an interview room at a detention center in the town of Shaddadi in Hasakah province on Aug. 8. (Nicole Tung/for The Washington Post)

Ibrahim later recalled that he had been recruited into ISIS by a man named Abu Omar, known to Ibrahim’s family as a member of the group. Interviewed while in detention at the Shaddadi prison in the presence of a guard, Ibrahim, 18, said he had simply been looking to earn some money.

But SDF intelligence officers said he asked from the start to join the group’s armed operations and that he had been watching ISIS online propaganda for a while. They declined to provide details. An officer in the Shaddadi prison, who spoke on the condition of anonymity because he was not authorized to talk with the press, said the young man’s trajectory was common among those arrested for involvement in ISIS sleeper cells: “They have poor education. Their morale is low. They see holding guns as a way of finding power.”

Ibrahim’s introduction to the group began with twice-weekly religious lessons, he said, describing a curriculum that demonized individuals who fought the group or joined local government.

Soon, he was tapped for missions. Initially, he was asked to transport motorcycles and bags through the desert, he said. During the next operation, a man was killed, apparently as punishment because he had been a member of the SDF.

Ibrahim described himself as a bystander in that attack, with no advance warning of the cell’s intention. But in phone message from several days later, heard by The Washington Post, Ibrahim sounds giddy as he says that he was the one to shoot the gun. “I didn’t stop until I could see his brains,” he tells a cousin.

Returning home late at night after that killing, Ibrahim remembers thinking to himself that there was no turning back. “I just had this feeling that I was in it now,” he said.

Ibrahim’s cell began planning the young women’s deaths days later, according to him and SDF officials. The women were both involved in a local government-sponsored program for female empowerment.

On a January night, members of the cell assembled. Ibrahim said he did not recognize most of the men. “One of them gave us a location in the desert,” he said. “There were six of us.” 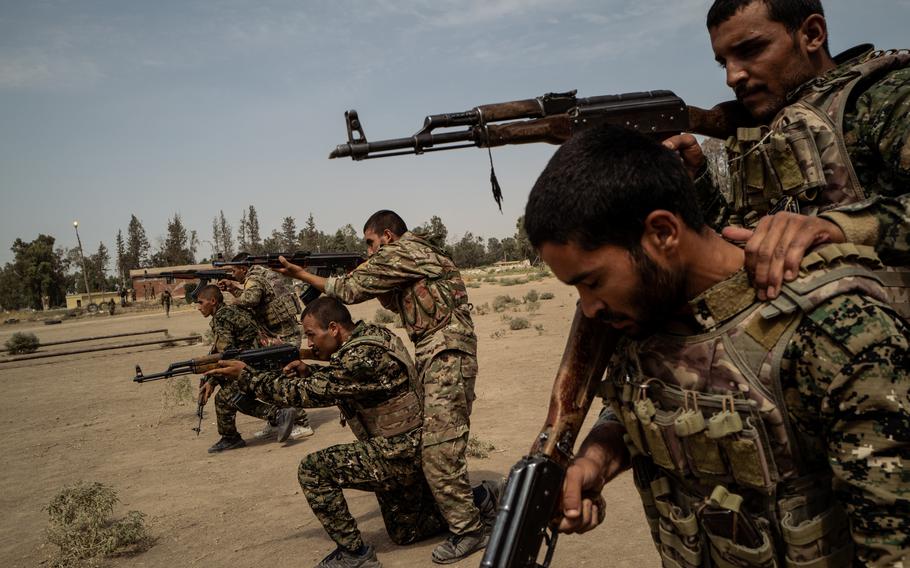 SDF commandos are trained specifically to thwart attacks, especially from Islamic State sleeper cells, as the extremist group ramps up its activities in the eastern part of Syria. (Nicole Tung/for The Washington Post)

Local SDF troops learned of Sa’da’s kidnapping first. She had been pulled from her house in the early evening and thrown into a Bongo pickup truck, they were told. Piling quickly into their vehicles, the soldiers gave chase.

But even as they scrambled toward the site of the abduction, the assailants were racing toward their next target. They arrived at Hind’s house at 7 p.m., her family said.

First came the bang at the door. Then the men burst inside, wearing masks, and screams filled the air.

The attackers separated Hind from her sister Hiyam and put a gun to Hiyam’s head. In the next room, someone was restraining Hind and shouting at others to find the family’s gun.

Then the militants fled with Hind, hopes for her survival fading with her muffled yells. “Sometimes you just know who has come to your door,” Hiyam said. She broke down in jagged sobs as the truck pulled away and the night felt deadly still, she recalled.

A picture of her sister’s body, dressed in the black velour tracksuit she had bought to wear at home, reached Hiyam’s phone in little more than an hour.

Hiyam concluded that their home had been watched for weeks, but she wasn’t sure whether it had been the militants or their own neighbors who had been spying on them. “They were asking for details that no one else could have known,” she said. “How can we trust anyone here now?”

Ibrahim was arrested days later based on coalition-provided intelligence, according to SDF officials at the Shaddadi prison. “We’d been tracking them for a while,” said one official, adding that the rest of Ibrahim’s cell was killed in an airstrike the following week.

SDF commanders say their forces have rolled up scores of sleeper cells in recent months, often on the basis of intelligence from the U.S.-led coalition or with coalition air support.

But in remote areas such as Dashisha, the terrain is on the militants’ side. The village, located near the Iraqi border, is surrounded by desert for miles, and checkpoints are few and far between. Along the Syrian-Iraqi frontier, ISIS fighters shelter in hidden tunnels or in buildings emptied by U.S.-led coalition bombing.

When reporters recently traveled to the area with an SDF escort, troops were visibly wary, scanning the horizon for threats. At one point, the soldiers slammed the brakes and fanned out along the sand dunes on foot. What they had seen, it turned out, was just an abandoned motorcycle.

The militants who stalk Dashisha are often local or from neighboring Iraq, according to SDF officials, and cells like Ibrahim’s typically comprise around half a dozen men. They generally make decisions among themselves that adhere to the propaganda of the now largely leaderless group. Although there is some communication among cells, they are mostly isolated, and this can make them hard to track.

ISIS cells are also active across the Euphrates River to the southwest, in territory held by the Syrian government forces of Bashar Assad. Coalition officials say government forces have made only weak efforts to tackle the militants, giving them a base to reconstitute.

SDF and coalition officials also warn that the local cells could one day be bolstered by escapees from the weakly defended prisons and displacement camps run by the SDF elsewhere in northeastern Syria that house thousands of former ISISfighters and their families. Officials say that men and women have been smuggled out from both camps and prisons, with some rejoining the fight.

The coalition said in a report released last month that ISIS activists have already tried to recruit among the hundreds of Syrians who have recently been released, but provided no evidence.

The area around Dashisha is chronically underserved, with scant access to water or government electricity. While such dire conditions have led some locals to sign on with ISIS, those hardships had helped convince Hind to join the local government, according to her family. “She wanted to help people and she wanted to provide for us,” Hiyam said.

The family home is a squat, concrete structure, spartan on the inside. No furniture was visible on the day reporters visited. On the wall by the door, someone had etched rose buds into the concrete and painted them pink.

Hind’s 4-year-old daughter, Rusil, scrolled through Hiyam’s cellphone photo gallery, past pictures of her smiling mother in a scarlet party dress to the image of her lying in a pool of blood. Rusil kept pointing to the photo and saying, “Mama.”

Hind’s family doesn’t go out much anymore. Last month, a young man approached her nephew in the street and told him that the family should wait and see what happened next. They took it as a warning.

In neighboring villages, few wanted to discuss the killings. “It’s hard for them to speak,” observed SDF commander Selmo, gazing toward the dusty roadside where Hind and Sa’da’s bodies had been found.

But when villagers were asked why it happened, they said they had little doubt. “Well, they worked for the local council,” said Hamid Aboud Mohammed, Sa’da’s neighbor. “People don’t do that around here.”

Meanwhile, Ibrahim’s fate remains uncertain. The SDF says it does not have the capacity to try him. He has been detained for seven months and has no lawyer.

When asked if he had been informed of when he might face trial, the young man simply looked down and shook his head.

The Washington Post’s Mustafa al-Ali contributed to this report.