by
Rachel Weiner and Tom Jackman
• The Washington Post • September 3, 2021 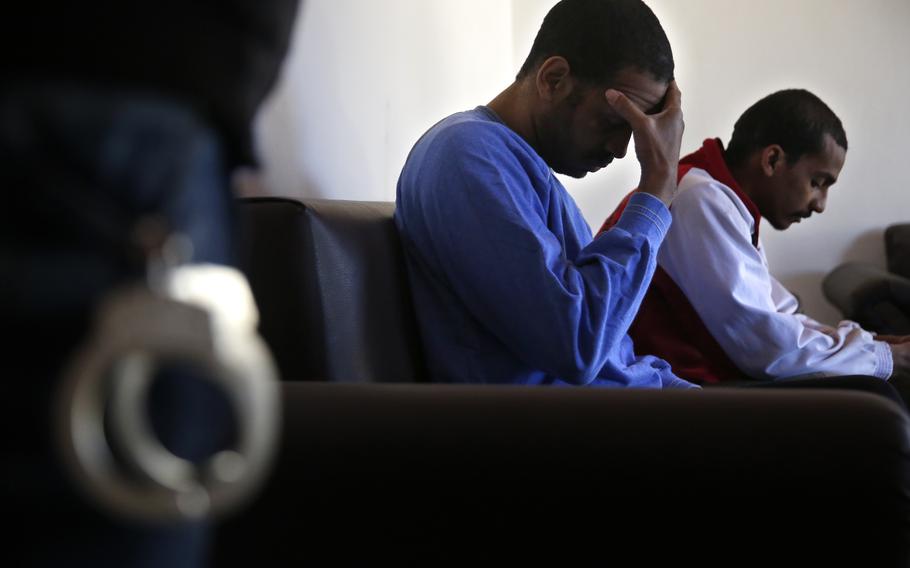 In this March 30, 2018 file photo, Alexanda Amon Kotey, left, and El Shafee Elsheikh, who were allegedly among four British jihadis who made up a brutal Islamic State cell dubbed "The Beatles," sit on a sofa during an interview with The Associated Press at a security center in Kobani, Syria. (Hussein Malla/AP)

Seven years after the Islamic State horrified people around the world by beheading hostages and using their deaths in propaganda videos, one former member has admitted to his involvement in the killings of four Americans.

Alexanda A. Kotey, 37, pleaded guilty Thursday in federal court in Alexandria to playing a role in the kidnappings and deaths of journalists James Foley and Steven Sotloff and aid workers Peter Kassig and Kayla Mueller. The three men were beheaded on camera in videos posted online. The circumstances of Mueller’s death remain unclear.

All four traveled to Syria, their friends and family have said, out of an intense desire to help - either by reporting on the war there or giving aid to those displaced by the conflict.

Kotey’s plea marks the first time a member of the Islamic State has been held accountable in a U.S. court for those killings. He faces a mandatory life sentence.

In exchange for his admission of guilt and promised cooperation, prosecutors agreed that after Kotey serves 15 years in a U.S. prison, he may seek to serve the rest of his sentence in the United Kingdom, where he was born. If that happens, Kotey also agreed he would plead guilty in a United Kingdom prosecution and face a life sentence there, and be returned to the United States if released by the U.K.

The government agreed to the possible transfer because three British men were also abducted by the same terror group, and two, aid workers David Haines and Alan Henning, were slain. A third, journalist John Cantlie, was never found and the British government said in 2019 he may still be alive.

Parents of all four American victims were in the courtroom Thursday, taking notes and dabbing their eyes as the names of their children were read over and over. They had pressed for criminal trials in the United States.

After the hearing, Diane Foley, James Foley’s mother, thanked the Justice Department for “this outstanding prosecution” while beseeching the government to “prioritize the return of all U.S. nationals kidnapped or wrongly detained abroad,” calling it “a silent epidemic.”

Kotey was captured in Syria in 2018 along with El Shafee Elsheikh, another accused Islamic State militant who is awaiting trial in the case, and brought to the United States in October.

Along with the masked killer from the videos, Mohammed Emwazi, who died in a 2015 drone strike, and a fourth Londoner, Aine Davis, they became known by hostages as “The Beatles” because of their British accents.

Kotey was born and raised in London and began practicing Islam in his early 20s. He and Emwazi attended the same mosque and traveled to Syria together in 2012.

The United Kingdom, which had revoked the pair’s citizenship, aided the U.S. prosecution after assurances the men would not face the death penalty.

“The justice, fairness and humanity that this defendant received in the United States stand in stark contrast to the cruelty, inhumanity and indiscriminate violence touted by the terrorist organization he espoused,” Raj Parekh, U.S. attorney for the Eastern District of Virginia, said after the hearing. “Today, through the voices and lives of the victims, justice spoke, and it is those words that will resonate through history.”

In court, Kotey read a statement in which he said he was “principally involved in every process of these negotiations” of trying to extract ransom from the United States, including emails and the “proof-of-life videos and emails” sent to the hostages’ families. “This role of mine required that I at times engage in acts of violence against the captives in order to subdue them, in order to compel those western governments, including the United States, to act fast and cooperate with our demands. I had no doubt that any failure of those foreign governments to comply with our demands would ultimately result in either the indefinite detention of those foreign captives, or their execution.”

He said he also served as a sniper for the Islamic State.

Prosecutors have alleged that both Kotey and Elsheikh were involved in the Islamic State’s attempts to extract ransom from prisoners’ families through calculated brutality.

Kotey instructed hostages to kneel and watch a Syrian prisoner’s execution while holding signs begging for their release, prosecutors said.

Under President Barack Obama, the military tried and failed to rescue the four American hostages.

Foley, 40, a freelance journalist working for the Boston-based GlobalPost, was abducted along with a British translator in November 2012. GlobalPost said it worked desperately to rescue Foley, but video of his death was released in August 2014.

Sotloff, 31, was also a freelance journalist, raised in Florida, who was abducted near Aleppo in August 2013. Video of his death was released in September 2014.

Mueller, 26, was a humanitarian aid worker from Arizona who had worked with agencies such as Doctors Without Borders when she was kidnapped in August 2013. Her family received an email with photos confirming her death in February 2015.

Kassig, 26, was a former Army Ranger from Indiana who founded a humanitarian aid group for refugees and was on his way to deliver food and medical supplies to refugees when he was abducted in October 2013. Video of his death was released in November 2014.

The Islamic State of Iraq and Syria reached its peak in 2015, and as the group’s territory shrunk, the campaign of public beheadings ended. But adherents of the group’s violent ideology continue to rely on such brutal methods; in recent months, observers say Islamist militants have decapitated dozens of civilians in Mozambique.

Elsheikh is set to go to trial in January. Davis was imprisoned in Turkey in 2017.

Kotey pleaded guilty to charges including hostage-taking resulting in the deaths of four Americans. and conspiring to support the terrorists who killed American, British and Japanese hostages.