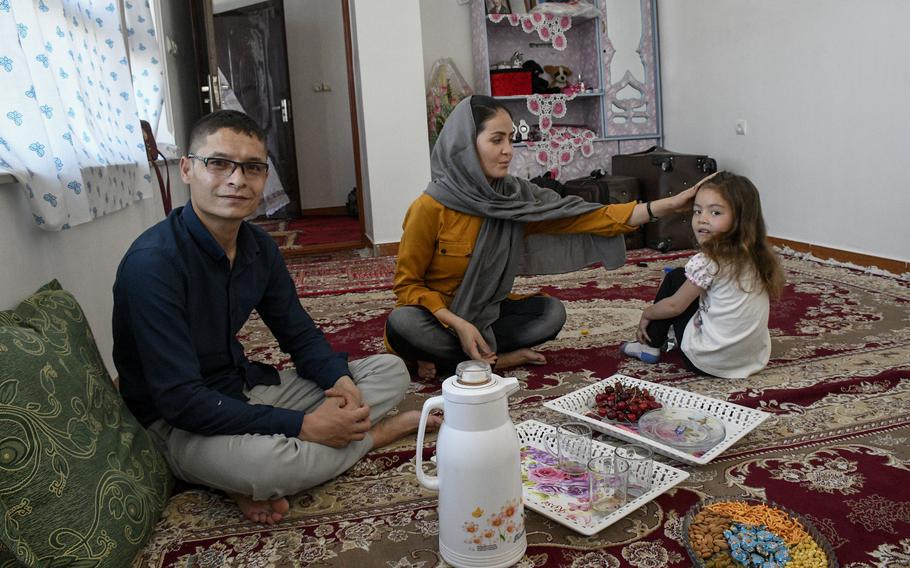 Buy Photo
Mohammed Naiem Asadi, his wife Rahima, and their daughter Zainab, 5, share a meal in their hiding spot of six months before leaving Afghanistan for the U.S. on May 31, 2021. They received parole, a temporary status to enter the U.S. without formal admission. Other Afghans at risk due to the recent Taliban takeover of the country may also receive the status in the coming weeks, a U.S. official said. (J.P. Lawrence/Stars and Stripes)

The U.S. may offer some Afghan evacuees without complete visa paperwork a temporary status allowing them to enter the country, a White House official said Tuesday.

The government could grant parole status to Afghans who have passed security screenings, the official said.

“Parole authority provides flexibility,” said the senior administration official, who spoke on condition of anonymity because they were not authorized to speak on the record.

The U.S. is evacuating tens of thousands of people from Afghanistan in the wake of the Taliban’s takeover of the country. Some 63,900 people have been evacuated by the U.S. since the end of July, defense officials told reporters Tuesday.

The Afghan evacuees are arriving at third-country transit hubs and being vetted for security risks, the Biden administration official said.

They will then fly to U.S. military bases to receive full health screenings, a COVID-19 test and possibly vaccinations, the official said. While on the base they will be connected to resettlement organizations.

The evacuees include U.S. citizens, green card holders, applicants for the Special Immigrant Visa who served alongside American forces or government agencies in Afghanistan, and others in danger due to their work as journalists or civil society activists, the official said.

Even before the recent evacuation crisis, many SIV and other visa applicants had been waiting for a final decision from the State Department for years, advocates and lawmakers have said.

The Department of Homeland Security has broad authority to grant parole on a case-by-case basis, an October report by the Congressional Research Service said.

People receiving parole are allowed to enter the U.S. but are not considered formally admitted into the country, the report said. They can apply for a visa or refugee status, and they are authorized to work.

Some immigration critics have argued parole status is used too often, and former President Donald Trump issued an executive order to prevent parole status from being used too broadly, the report said.

The government has the authority to place conditions on parole, the Biden administration official said. This can include requiring people to report to caseworkers, the report said.