Why is the Taliban on such a winning streak, and can the tide be turned? 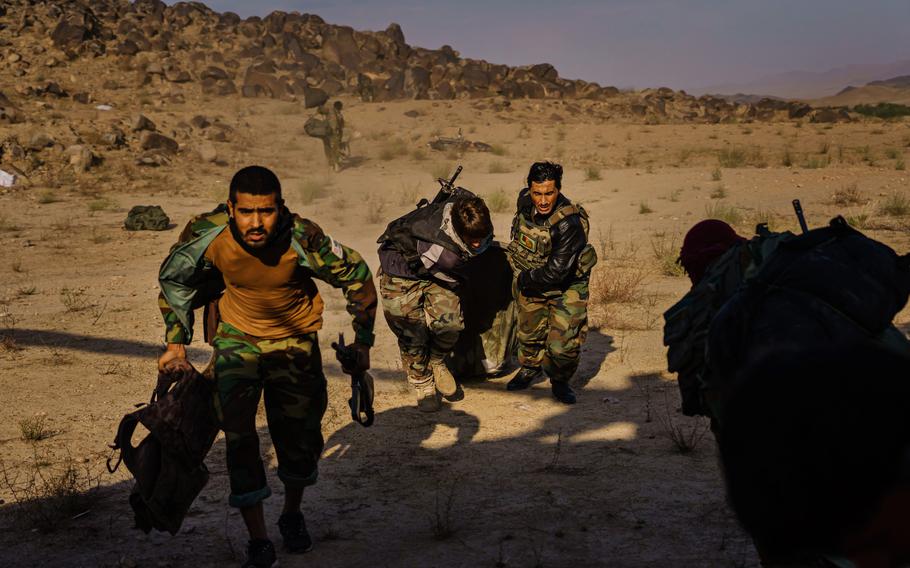 Soldiers dragging a sleeping bag with their belongings run toward a waiting UH-60 Blackhawk under fire from the Taliban in the Shah Wali Kot district of Kandahar, Afghanistan. (Marcus Yam, Los Angeles Times/TNS)

(Tribune News Service) — It's been a punishing few days for Afghanistan's U.S.-created and -supported army.

Since Friday, the Taliban has overrun bastions of government control, snatching more than a quarter of Afghanistan's 34 provincial capitals on its way to controlling an estimated 65% of the country. On Wednesday, Afghan President Ashraf Ghani raced to the country's north to rally a defense of besieged Mazar-i-Sharif, the country's fourth-largest city.

With U.S. forces set to complete their pullout in less than three weeks, the Taliban's breakneck advance has many observers asking: After two decades and billions of dollars spent by the U.S. and its partners to create effective Afghan fighting forces, what happened? And can they stop the Taliban from taking over the entire country?

Here's a look at the situation.

On paper, the Taliban should be no match for the Afghan National Defense and Security Forces, known as the ANDSF. According to the latest report from the Special Inspector General for Afghanistan Reconstruction, or SIGAR, a U.S. government watchdog, the ANDSF comprises 300,699 security personnel, including army, police and air force members. Around one-fifth of them are highly trained special forces operatives; then there are undisclosed figures for CIA-trained paramilitary groups as well as militias associated with the country's warlords.

The Taliban, the SIGAR report estimated, has around 75,000 fighters.

But those figures should be treated with skepticism. Corruption, which infects the Afghan security forces just as much as it does the government, means there are "ghost" soldiers and police — personnel who either never show up or never existed but are on the books so that officials can pocket their salaries.

It's difficult to estimate the scale of the problem, but in 2019, a new payroll system purged more than 10% from the rolls. A year later, another SIGAR report found a gap of some 58,478 personnel between recorded and actual strength levels.

The problem is worse among the Afghan police, especially in the country's south. SIGAR reported in 2020 that, in the southern provinces — areas of pro-Taliban sentiment — anywhere from 50% to 70% of police positions were for personnel who didn't exist. (That report also found that half of them use drugs.)

"For a long time, people in the U.S. and the NATO advisory mission have known that the Afghan police are notoriously corrupt ," said Andrew Watkins, senior analyst for Afghanistan at the International Crisis Group. He added that although the new payroll system had gone some way toward improving the situation, commanders were now skimming off their subordinates' salaries.

"Whatever solution there has been for corruption, corruption has found a way," he said.

When asked last month if he trusted the Taliban, President Biden brushed off the question, saying instead that he trusted "the capacity of the Afghan military, who is better-trained, better-equipped, and … more competent in terms of conducting war."

But only a portion of the military would meet that criteria, chief among them the special forces, which are estimated to include some 56,000 operatives. The performance of other sections of the military has been less encouraging, with many observers complaining of a lack of motivation to fight or of personnel acting as little more than placeholders.

"They're meant to sit in checkpoints and act as a static representation of government presence," Watkins said. "It's understood that they don't fight effectively — they're certainly not advancing — and that they're not an offensive force."

That has led to an all-too-frequent routine on the battlefield: Special forces dislodge the Taliban from an area, only for it to be lost again a short time later when other security personnel — whether army, police or local militias — come in to secure those gains and flee before a Taliban counterattack.

When these less-trained troops do fight, they've often looked to air support for cover. But much of that air power has come from the U.S. and its NATO allies, meaning that, as the U.S. draws down, local troops are having to rely more on the Afghan air force for close support, reconnaissance and intelligence-gathering.

The July SIGAR report said all aircraft types in the Afghan air force are flying "at least 25% over their recommended scheduled maintenance." Crews, it said, "remain overtaxed" by an increasingly untenable operations tempo.

Just like U.S. and NATO troops, Western contractors who are meant to service the aircraft and repair battle damage are also "going to zero," meaning they are set to depart the country by Aug. 31, with still no concrete plans as to how the air force will be maintained. That's especially detrimental to the UH-60 Black Hawks, helicopters that are used for everything from repulsing Taliban onslaughts to casualty evacuation to resupply.

Perhaps the biggest problem facing the ANDSF isn't training or equipment but logistics. The Taliban's control of rural areas has also come with more than 80% of the country's highways in its hands. That figure has only increased in recent days as the group has taken additional territory, such that any attempt to resupply the thousands of army and police bases and checkpoints must be done almost exclusively by air.

In other words, every bullet, every mortar shell, every gallon of fuel and often every carton of eggs has to be brought in by already overstretched air force crews. And the greater the distance from Kabul or primary bases in Kandahar and elsewhere, the more likely the outpost will fall.

That's why, for several Afghan officials, including one former high-ranking security head who spoke on condition of anonymity, the recent losses have come as no surprise.

"The ANDSF is very scattered, and it can't choose its own battlefield," he said. "The Taliban chooses the battlefield. That meant the ANDSF had to shrink its presence."

Can the government turn things around?

It depends. Earlier this month, Ghani, the president, presented a security plan that he vowed would bring the country back under government control within six months. The general outline of the plan has the army defending strategic targets while the Afghan police provide security inside major urban areas.

But another, less-discussed aspect of the plan includes empowering former strongmen, including figures with a dark record in Afghan's conflict-filled history. Ghani's visit to Mazar-i-Sharif on Wednesday was an effort to organize a defense of the city with strongman Atta Mohammad Noor and notorious militia leader Abdul Rashid Dostum. There have been reports that Ghani has promised the two leaders air support as well as assistance from the special forces corps to claw back northern territories.

Could the U.S. get involved again?

Biden has poured cold water on that idea, despite the staggering pace of losses hitting the Afghan army.

"We trained and equipped with modern equipment over 300,000 Afghan forces. … I'll insist we continue to keep the commitments we made, providing close air support, making sure that their air force functions and is operable, resupplying their forces with food and equipment and paying all their salaries," Biden said in a White House briefing Tuesday. "They've got to want to fight."

As for withdrawing U.S. troops within the space of just a few months, "I do not regret my decision," he said.