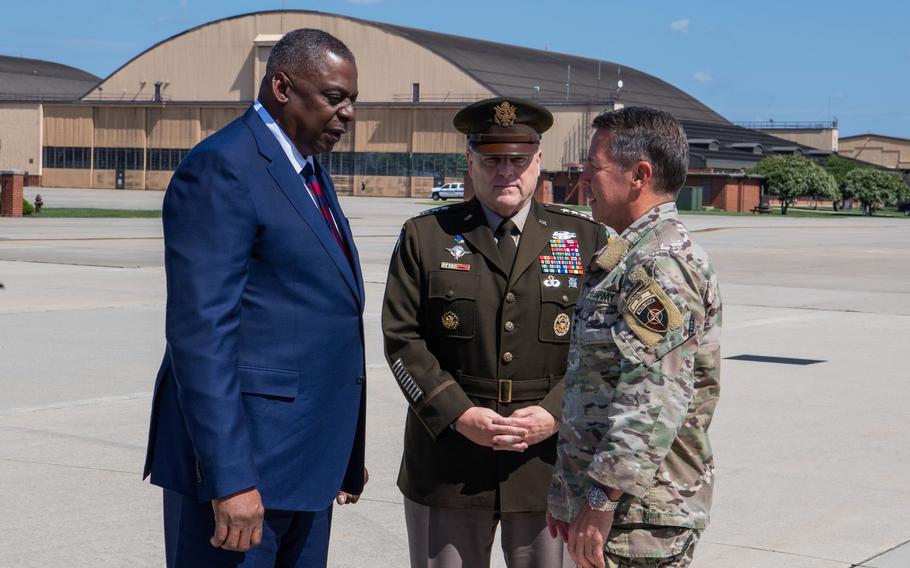 Defense Secretary Lloyd Austin and Army Gen. Mark Milley, chairman of the Joint Chiefs of Staff, greet Army Gen. Austin Miller as he returns to the U.S. from Afghanistan at Joint Base Andrews, Md., on July 14, 2021. (Jack Sanders/U.S. Air Force)

WASHINGTON — As the Taliban’s strength grows amid the U.S. withdrawal from Afghanistan, top defense officials on Wednesday said the Afghan government can prevail after American troops leave the country.

Though there’s “clearly a narrative out there that the Taliban is winning,” Army Gen. Mark Milley, chairman of the Joint Chiefs of Staff, said the group is far from overthrowing the Afghan government.

“They are propagating an inevitable victory on their behalf — they’re dominating the airwaves,” Milley told reporters at the Pentagon. “But I will tell you … you’ve got 34 provincial capitals in Afghanistan, none of them have been seized.”

Still, the “strategic momentum appears to be with the Taliban” as they have seized “a significant amount of territory” over the past six to 10 months,” he said. “[But] a negative outcome — a Taliban automatic military takeover — is not a foregone conclusion. We will continue to monitor the situation closely and make adjustments as necessary.”

The U.S. on May 1 began withdrawing its troops and equipment from Afghanistan after nearly 20 years of war there. While President Joe Biden has said the U.S. completed its mission in Afghanistan of preventing another attack on American soil after 9/11, critics have questioned whether the U.S. should leave Afghanistan with the Taliban at large and regaining territory.

Milley said Afghan security forces are “adjusting forces to consolidate into the provincial capitals” to protect the population, most of whom live in those cities and the capital of Kabul.

With so many changing factors, it remains to be seen what will happen in Afghanistan after U.S. forces leave, the general said.

As Taliban insurgents continue fighting, leaders of the terrorist group continue to say they want to reach a political agreement with the Afghan government to end the country’s civil war, The Associated Press reported Sunday.

The U.S. drawdown process is about 95% completed as of Wednesday, with 9,000 troops and civilians moved out of the country so far and all U.S. bases in Afghanistan turned over to the Afghan government, he said.

“The sheer volume of movement involved in this operation has been extraordinary, 984 airlifts over the last less than three months have enabled us to reach almost 95% completion on the retrograde,” Milley said.

Defense Secretary Lloyd Austin on Wednesday reiterated the full drawdown will be complete by the end of August, shortly ahead of the original deadline of Sept. 11 that Biden set in April.

After August, the military will focus only “on those threats that present a threat to the United States,” Austin told reporters at the Pentagon.

However, the U.S. will provide financial support and “over-the-horizon” military support to Afghan forces, such as airstrikes, he said. The Defense Department is already in talks with nearby nations to “stand up nodes to provide security assessments” in the region after the U.S. withdrawal from Afghanistan.

“Make no mistake that we remain committed to helping the Afghan security forces and the Afghan government going forward,” Austin said. “We are doing what we said we're going to do in terms of putting the pieces in place to ensure that we can provide that support.”