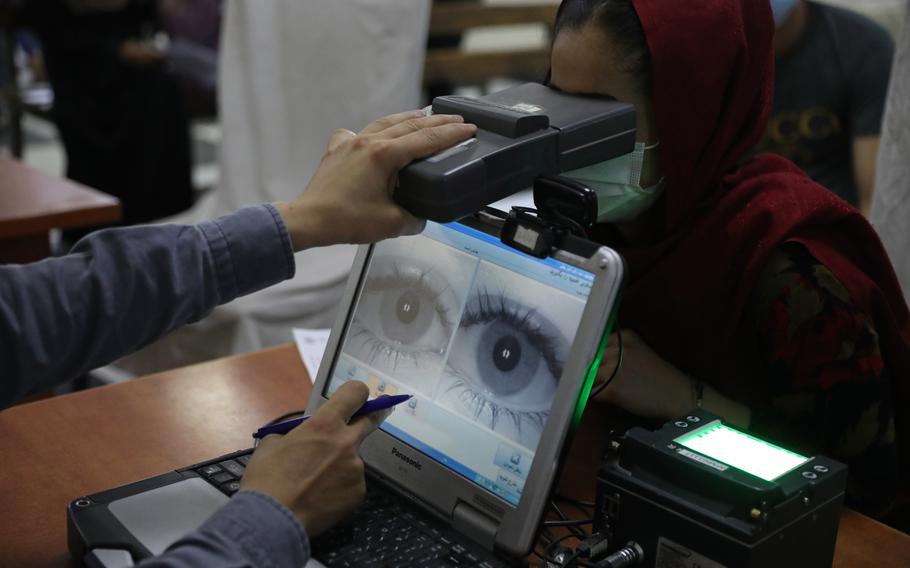 An employee scans the eyes of a woman for biometric data needed to apply for a passport, at the passport office in Kabul, Afghanistan, Wednesday, June 30, 2021. Afghans are lining up by the thousands at the Afghan Passport office to get new passports. (Rahmat Gul/AP)

KABUL, Afghanistan — Imtiaz Mohmand, just 19, makes a living selling melons out of a crate perched on his three-wheel motorcycle in the Afghan capital's Kart-e-Now neighborhood. He only managed to finish grade 7 before being sent to work to help support a family of 13. He has been robbed twice. Both times, his mobile phone was taken, along with his meager earnings of the day.

In four days, he and four friends will leave Afghanistan. They have paid a smuggler to sneak them across the border to Iran and into Turkey.

"There's no job, no security here. There are thieves everywhere. I tried to make a living but I can't," said Mohmand, who has seven friends already on their way to Turkey.

Mohmand's frustration and anxieties run like a theme through most conversations in today's Afghanistan as Afghans witness the final withdrawal of the U.S. military and its NATO allies.

President Joe Biden has said that America did what it came to Afghanistan to do — hunt down and punish the al-Qaida terrorist network that carried out the 9/11 attacks. After nearly 20 years, Biden said it was time to end America's "forever war."

Afghans, however, say international forces are leaving a country deeply impoverished, on the brink of another civil war and with worsening lawlessness that terrifies some more than the advancing Taliban. The warlords with whom the U.S.-led coalition partnered to oust the Taliban are resurrecting militias with a history of devastating violence to fight the insurgents, who have made gains even in the warlords' northern strongholds.

So significant is the danger that Washington's top general in Afghanistan, Gen. Austin S. Miller, warned this week in Kabul at what had all the hallmarks of a farewell press briefing that escalating violence risked a civil war "that should be a concern to the world."

Outside the Turkish Visa Center in Kabul's city center, the road is crowded with four-wheel drive vehicles and new Toyota Corollas belonging to the wealthier who are looking for visas to leave. Since the announcement of the final withdrawal, thousands of visa applications have inundated the Turkish Embassy in Kabul. Other embassies have also reported a dramatic increase.

"Our people are thinking maybe a civil war will start and that is the main problem why people want to go abroad," said Abdullah Saeed, a lecturer at Kabul's Polytechnic University. He was applying for a visa to attend a conference. "Our political parties are all getting weapons. Everyone has weapons here, so that is why people are frightened."

The closure of some Western embassies and warnings by others for their citizens to leave only deepen the sense of dread. While some Afghans choose to leave, legally or illegally, others settle their families abroad then continue to work in Afghanistan.

Afghans are lining up by the thousands at the Afghan Passport Office to get new passports, possibly to leave, uncertain what tomorrow will bring.

Salia Siddiqi sat under a tree with three of her seven children, one of thousands of people at the passport office. She was waiting to submit her papers for her family's passports, though she wasn't sure whether she'd be able to travel or how even to afford it.

"There is no security anywhere. You can't travel to the provinces," she said. "It's not about me but what about my children? I don't know if they will have a future here. We think there will be violence, it will be a dark time."

Afghanistan looks significantly different than in 2001. There is internet, most people have mobile phones, women are in the workforce and schools for boys and girls are open, though most Afghans, who can afford only public schools, complain of the lack of qualified teachers, supplies and even buildings.

Even the Taliban have sought to encourage Afghans to stay in the country, promising they have nothing to fear from them. The Taliban have sent some of their senior council members from their political headquarters in the Middle Eastern state of Qatar to assure minority ethnic groups that they can live safely under the Pashtun-dominated movement.

Still, many Afghans say after 20 years and billions of dollars their future seems bleak. Afghanistan is one of the most corrupt countries in the world, according to Transparency International. Its political leadership is deeply divided, squabbling over almost everything, even the presidency. Last year, there were briefly two presidents.

Many of Afghanistan's elite and political leadership have a passport other than Afghan, and often their families live abroad. "They are dual citizens. They do their business here, whether it's in government, outside of the government," said Asey. "They are not invested in blood and treasure in this country."

The jobless rate is officially at 35%, though likely higher. Asey says barely 13% of the hundreds of thousands of new university graduates every year find jobs. According to the World Bank, 54% of the population is below the poverty line, making less than $1.90 a day.

The melon seller Imtiaz Mohmand earns roughly 300 Afghanis a day, around $3, but there's days he doesn't make a sale, like Thursday, when he had to pay 400 Afghanis out of pocket to his supplier. Nearby, Azizullah Rahman makes 200 Afghanis ($2.50) a day selling car-cleaning cloths. He's single but back home in Logar province, and he has more than a dozen people relying on his income. Across from the grand Eid Gah Mosque, Dost Mohammad, who drives a communal taxi on the route to the eastern city to Jalalabad, hasn't had a fare in two days.

Yet since 2002, the United States has spent more than $144 billion on reconstruction and development -- more than $17 billion just to assist Afghan government ministries, according to Washington's own watchdog monitoring U.S. tax dollar spending on Afghan reconstruction. Billions more have been spent on security.

"For example, every bullet had to come from America," he said. "Why weren't we making them here?"

But most Afghans blame corrupt politicians and officials, many of whom live in Kabul's luxurious Shairpur neighborhood. There, five- and six-story marble mansions jostle for space, many protected by barricade and heavily armed guards. For decades, the district was home to some of the city's poorest, living in homes of sun-baked mud or rough-hewn bricks, until they were pushed out by the rich.

At his small family woodworking shop, Ghulam Farooq complained that all the foreign cash ended up going to warlords.

"For every regime we had hope and every regime disappointed us, even the foreigners," he said. "Now people are escaping through every border ... Only those who have no money and no means will stay here as they always have. And they will suffer."