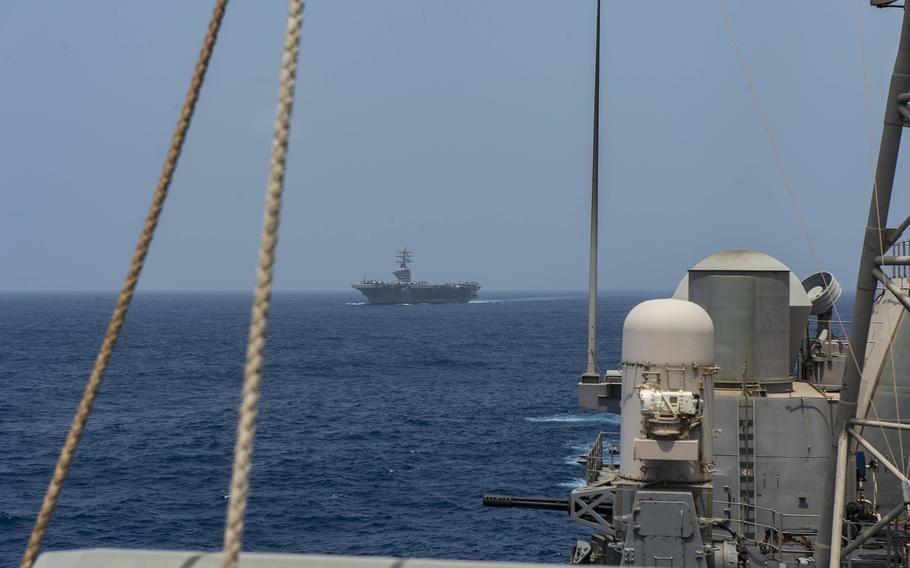 (Tribune News Service) — The planners had about a week to figure out routes and refueling for Carrier Air Wing 3 for the long haul from USS Dwight D. Eisenhower to the front lines in Afghanistan, on the mission to protect American soldiers through this summer’s drawdown.

For the aviation ordnance sailors, the mission meant arming and loading live ammunition — but they had practiced, in many cases for years, handling less deadly versions.

The pilots roaring off the flight deck, mostly at night, for their seven- to eight-hour missions, had trained on close-air support, air-to-ground strikes, communications jamming and low-altitude flights to warn off adversaries that aviators consider some of those challenging assignments they undertake.

“But what we do every day at sea is inherently dangerous, so that’s not really different,” said Rear Adm. Scott Robertson, strike group commander, pausing for a few minutes to chat while the Eisenhower was refueling the cruiser USS Vella Gulf as the two Norfolk-based warships steamed side-by-side in what many navigators and watch-standers consider the most hazardous maneuver they’re called on to perform.

“What is different, is the sense of purpose we get, participating in a historic mission, supporting American service members,” he said.

It was just a few days after President Joe Biden’s announcement that U.S. troops would be out of Afghanistan by Sept. 11, ending 20 years of war during which nearly 800,000 saw action and nearly 2,400 lost their lives, that Secretary of Defense Lloyd Austin extended the Eisenhower’s deployment to make sure the drawdown was orderly.

The Eisenhower was in the Arabian sea, and Afghanistan was several hours’ flight away — farther inland than many carrier aviators routinely fly.

Still, for the strike group’s planners, the assignment meant figuring out safe routes to go and return, as well as how to arrange the in-the-air refueling needed, first to keep the carrier’s planes in the skies over Afghanistan and then to get them safely back to the ship.

“It’s like flying between Miami and New York, just to get there,” Robertson said.

Long flights, close air support and in-air refueling are tasks carrier pilots train on all the time. Overseas deployments like the one the Eisenhower strike group has been on since February are often a way to demonstrate their capability.

That’s what the Eisenhower strike group had been doing, before the call came from Austin to support the drawdown.

The group had operated with Morocco’s navy and air force near the chokepoint of the strait of Gibraltar. Just before getting the drawdown assignment, it was operating with the French carrier Charles de Gaulle, in a rare, two-carrier exercise in the Arabian Sea.

There was plenty of shifting ordnance from magazines deep in the hull, moving it up to the flight deck and arming it there for the red-shirted ordnance sailors, including live munitions for live-fire exercises in Morocco, as well for operations in support of the continuing campaign against Islamic State remnants in Syria and Iraq.

“It’s muscle memory,” Robertson said. “I like sports analogies. You scrimmage, you practice all the moves. But at game time, that’s when the sense of purpose kicks in.”

The strike group has been busy on other tasks, in addition to close air support for the Afghanistan drawdown — and the drawdown itself has been going quickly. Late last month, military sources were saying they were aiming to have U.S. troops and NATO allies out of the country by mid-July.

Those ships have been patrolling, making sure key chokepoints stay open for shipping, exercising with allies to ensure that sailors from different navies, speaking different languages and knowing differing maritime traditions can work together seamlessly.

On Monday, with the Afghanistan support work in the hands of USS Ronald Reagan, and with no fleet oiler nearby, Eisenhower was in the Red Sea, refueling the Vella Gulf.

“We may be disaggregated, but we can come together fast and look like a traditional carrier group, ready to project American seapower anywhere in the world,” Robertson said.

“We are a team,” he said. “To get planes off the front end is more than pilots; the planes have to be maintained, the ordnance has to get there, the culinary specialists have to feed us, the engineers keep us running ... every sailor is contributing.”