The ‘Golden Hour’: How the Afghan war brought advances in battlefield medicine 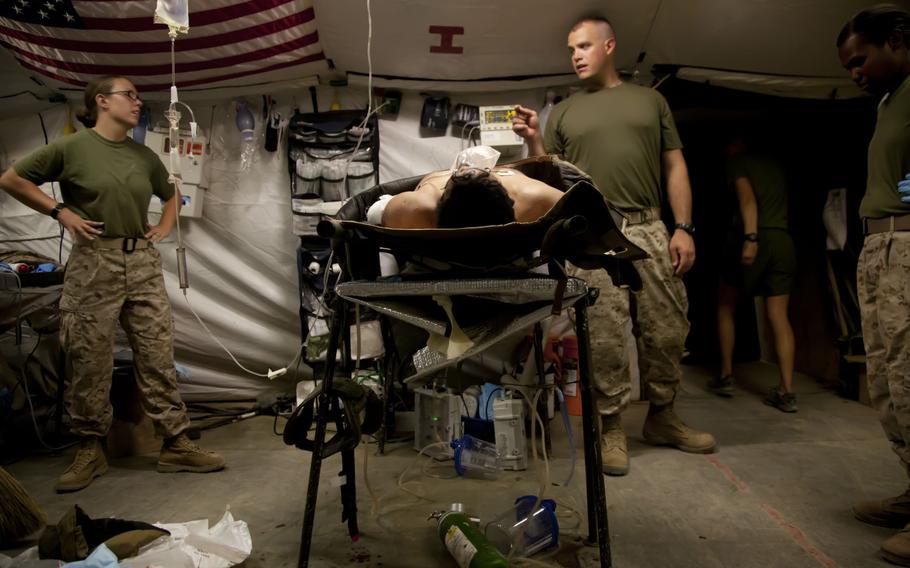 Just what endures from the 20-year war is an open question, except in one area: Battlefield medicine. There, gains have already taken root.

One-handed tourniquets. Blood transfusions near the front lines. Faster evacuations to trauma centers. All got implemented in Afghanistan, and all saved lives.

This has often been the case during the mayhem of military combat, which forces doctors to improvise, and quickly. The advances they make then spread to civilian health care.

Anesthesia has ties to the Civil War. World War I brought the first widespread use of X-rays. World War II was a proving ground for blood banks and antibiotics. Medical evacuation by helicopter started in the Korean War.

“These changes happen because there is a profound need, and because the injuries are of a scale, unfortunately, where you have enough cases to pioneer a technique and enough evidence to show that it works,” said Scott McGaugh, a San Diego military historian. “There’s hardly a corner of today’s health care environment that doesn’t trace its roots back to the battlefield,”

McGaugh, author of “Battlefield Angels,” a 2011 book about combat medics, said Afghanistan, where catastrophic injuries were caused by roadside bombs and other improvised explosives, necessitated a significant change.

The result is that war has never been more survivable. During the Revolutionary War, about 40% of the seriously wounded eventually died. In World War II, about 30% did.

In Afghanistan, what had been a 20% fatality rate in the early years of the war was reduced to 8.6% by the later stages.

“The only winner in war,” an old saying goes, “is medicine.”

Tourniquets to stem blood loss are ancient. They date at least to the reign of Alexander the Great and his invasion of Persia in around 334 B.C.

But they haven’t always been recommended. Dr. Matthew Tadlock, a Navy trauma specialist in San Diego, remembers being taught in medical school more than 20 years ago that “tourniquets are bad and shouldn’t be used.”

That’s because studies showed that the devices could cause nerve damage and might lead to amputations, according to Jeffrey Howard, who has studied their use and is an assistant professor of public health at the University of Texas at San Antonio.

At the Afghanistan war’s outset, tourniquets were not widely used. “But once we got in there,” Howard said, “we learned pretty quickly: We need these.”

Many of the injuries were from bomb blasts, which sometimes injured or severed more than one limb. People were bleeding to death.

Old-fashioned tourniquets needed two people to apply them tightly enough. The ones designed for Afghanistan could be applied by one person — applied one-handed by injured service members to themselves.

“That was a significant improvement, designing a self-applied tourniquet,” Howard said. “And they’re lightweight, easier to carry.”

Those devices only work on the extremities, though, and sometimes the IEDs were so powerful they severed limbs at the hip or the shoulder. A new kind of “junctional tourniquet” had to be created, too, Howard said.

A study he did with several collaborators showed that the improved effectiveness and availability of tourniquets prevented an estimated 240 deaths in Afghanistan. (About 2,300 U.S. troops were killed in action in the war, with another 20,000 injured.)

Tadlock, the trauma surgeon, called tourniquets — which had played a key role in World War II, when about 50% of those killed in action bled to death — “a lesson that we had to relearn.” That’s not uncommon in war. Institutional memory fades sometimes after the bullets stop flying.

But the success in Afghanistan and Iraq has already spread to the civilian world, where a non-profit initiative called “Stop the Bleed” offers training and equipment to help first-responders and the public intervene if they come across someone who is severely wounded.

Administered by the American College of Surgeons, the program has trained 1.5 million people since it started in 2017. The goal: 200 million trained.

It’s called “The Golden Hour.” Get a severely injured patient into the hands of surgeons within 60 minutes, and the odds of survival go up.

Easier said than done in a place like Afghanistan, where troops often fought in rural areas, down dirt roads. Helicopters usually had to be called in for evacuations.

Early on, the “Golden Hour” became two hours or more because of the logistics. That was about what the lag time was during the Vietnam War, and a lot better than it was during World War II, when the average time from injury to hospitalization was 12 to 15 hours.

In 2009, Defense Secretary Robert Gates ordered troop leaders to improve the response time, and they did so by bringing in more transport helicopters. Less than 20% of the casualties had gotten to the hospital in the Golden Hour during the war’s initial years. After his directive, the number went up to 76%.

He and his collaborators also studied the role of blood transfusions on mortality. It used to be that medics would give the wounded saline or other IV fluids to maintain blood pressure while they were transported to a hospital. Once there, they would get blood products as needed.

The nature of the wounds in Afghanistan quickly made it clear that blood was needed at the point of injury. But blood is tricky to work with. especially whole blood, which requires refrigeration. New techniques involving blood component therapy, and equipment for storing and transporting it were put into place.

Those results are also spreading into the civilian world, with more emergency crews on ambulances carrying blood products now.

The Afghanistan war has gone on so long it has had several “signature” wounds. Amputations. Traumatic brain injuries. Post-traumatic stress disorder.

Amputations are the most visible. There have been about 1,650 of them from injuries suffered in the wars in Afghanistan and Iraq since 2001.

Many service members have lost more than one limb; some have lost all four. When one amputee missing her left leg was interviewed by Stars and Stripes four years ago, she said one of the things motivating her recovery was her gratitude.

In the same article, a Marine bomb technician who lost his right hand to an IED said the caregivers at the Walter Reed military hospital had jokingly given him a nickname: “Paper Cut.” He was the least injured person there.

The steady stream of patients at military medical centers has also spurred improvements in prosthetics, which are lighter and more functional now. And, increasingly, more gender-sensitive.

The VA has long treated female dependents for artificial limbs needed because of diabetes and other health conditions but not for battlefield trauma.

“That really became a bigger question in Iraq and Afghanistan, where more women were deployed in all kinds of roles,” said Lory Manning, a retired Navy captain and director of government operations for the Service Women’s Action Network, based in Washington, D.C.

She said more than 100 women are combat amputees, about 3% of those who have lost limbs, and the Veterans Health Administration has become increasingly sensitive to their needs.

The agency has funded eight studies since 2017, looking, for example, at whether a foot-ankle system can be developed that would allow an amputee to wear high heels.

“Many women like to wear high heels at least some of the time,” Manning said.

They’re also more likely to go bare-armed and bare-legged in public, she said, and that has implications for how the prostheses look.

Women amputees interviewed for a Government Accounting Office report issued last November told a familiar story: the military is ahead of the wider world when it comes to what is available in prostheses.

If the past is any prologue, that will probably change.

“Stop for a moment,” said McGaugh, the military historian, “and think about how much health care has been pioneered and validated during the different wars. Who knows what lessons learned in the Middle East will become part of standard care for civilians?”