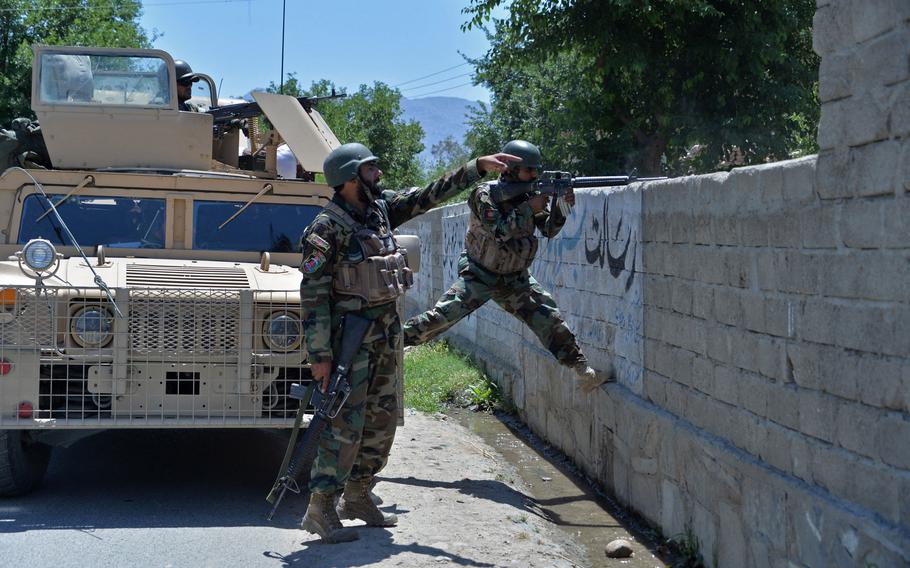 Members of Afghan security forces take their positions during an ongoing clash between Taliban and Afghan forces in Mihtarlam, the capital of Laghman Province, on May 24, 2021, as the insurgents pressed on with their campaign to seize new territories as the U.S. military continued with its troop pullout. (Noorullah Shirzada, AFP/TNS)

WASHINGTON (Tribune News Service) — Taliban militants are gathering across Afghanistan in preparation for a possible takeover of the country by force as U.S. and NATO troops exit over the next few months, the United Nations has warned.

The insurgents continue to be “closely aligned” with al-Qaida and are massing “forces around key provincial capitals and district centers, allowing them to remain poised to launch attacks,” the report released Wednesday said.

“The Taliban’s intent appears to be to continue to strengthen its military position as leverage. It believes that it can achieve all of its objectives by negotiation, or if necessary, by force.”

As part of a peace deal with the U.S., the Taliban had promised to cut ties with al-Qaida and prevent any terror groups from using Afghan soil as a safe haven.

The group’s play for power could trigger a civil war in the already violence-wracked country — an outcome Afghan President Ashraf Ghani has repeatedly voiced concerns over as the U.S. prepared its troop withdrawal, due to be completed by Sept. 11.

Washington’s push for a peaceful settlement between the warring groups has so far been futile. There’s been no breakthrough since talks began in September last year in Doha, Qatar, where the militant group has a political office.

The Taliban, which controls or contests 50% to 70% of Afghan territory, has increased attacks across the country, trying to use violence to push Ghani to accept its terms. At least two top leaders of the group are “reported by member states to oppose peace talks and favor a military solution,” the report said.

Last year was the nation’s most violent ever recorded by the U.N., exceeding 25,000 incidents, a 10% increase from 2019, the report said. Security incidents have risen more than 60% in the first quarter of 2021, compared to the same period last year. Targeted killings of government officials, human rights activists, journalists, women and religious leaders have also spiked.