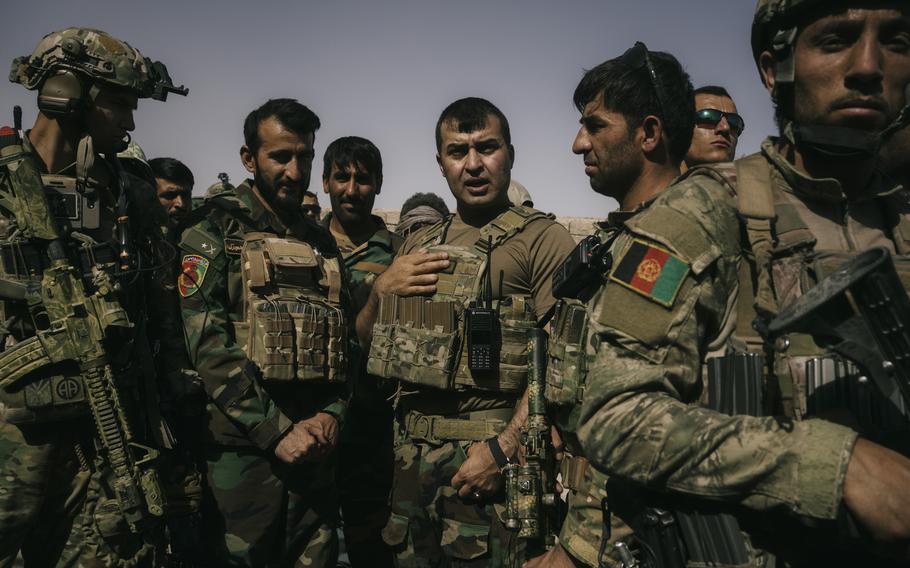 Gen. Sami Sadat talks with troops during a May 25 visit at Nazar outpost near Lashkar Gah. (Lorenzo Tugnoli/for The Washington Post)

NAWA, Afghanistan — The fight between Afghan government troops and the Taliban is entering a more brutal phase as a reduction in airstrikes against the militants by withdrawing U.S. forces has largely shifted combat to ground engagements, many on the edges of densely populated urban areas after some recent Taliban advances.

The area had been densely mined by the Taliban, and weeks of clashes left the streets shredded: dirt roads littered with craters and mud-straw walls pockmarked with bullets and shrapnel.

For months, the Taliban slowly expanded its influence across Afghanistan after signing the withdrawal deal with the United States. The halt in offensive U.S. operations, especially airstrikes and raids, allowed the group to mass fighters, gather supplies and chip away at government-held territory.

The country's south, specifically Helmand, witnessed some of the militants' most striking advances. By May 1, the date marking the start of the complete withdrawal of foreign forces from Afghanistan, the Taliban had massed hundreds of fighters in Helmand. And as the U.S. military handed over its last base here to the Afghan government, Taliban fighters launched a massive assault the same day on the provincial capital, Lashkar Gah, overrunning territory in three districts including Nawa.

While Nawa had fallen to the Taliban several times over the past two decades, residents say the current battle to retake the area is unlike the others before: It has dragged on for weeks rather than days, and both sides are using heavier weaponry.

Sadat described one of the most successful raids, which surrounded and killed a unit of about 50 Taliban fighters. "They were eager to collect the dead, so we kept watch on the area," he said, recounting that his forces shot several more of the militants as they tried to retrieve bodies.

He said he didn't know if any of the Taliban fighters had tried to surrender. "The boys were angry," he replied, referring to his men. The junior officer who led the operation was promoted to major.

The battle in Helmand could indicate how the war in Afghanistan will evolve once the United States and other NATO forces completely withdraw from the country. Over the past month, violence has escalated significantly. The Taliban carried out a wave of attacks on provincial capitals, initially triggering a collapse of government forces at several bases and outposts. Now, where the Afghan military is pushing back, both sides are increasingly turning to harsher tactics.

Taliban fighters are blanketing territory with roadside bombs and booby-trapped explosives. And Afghan government forces on the offensive are waging exhausting ground operations covered by intense Afghan air support. Of the eight provinces where the Taliban gained territory last month, the Afghan military has advanced in three: Baghlan in the north, Laghman to the east and in Helmand, around its capital Lashkar Gah. 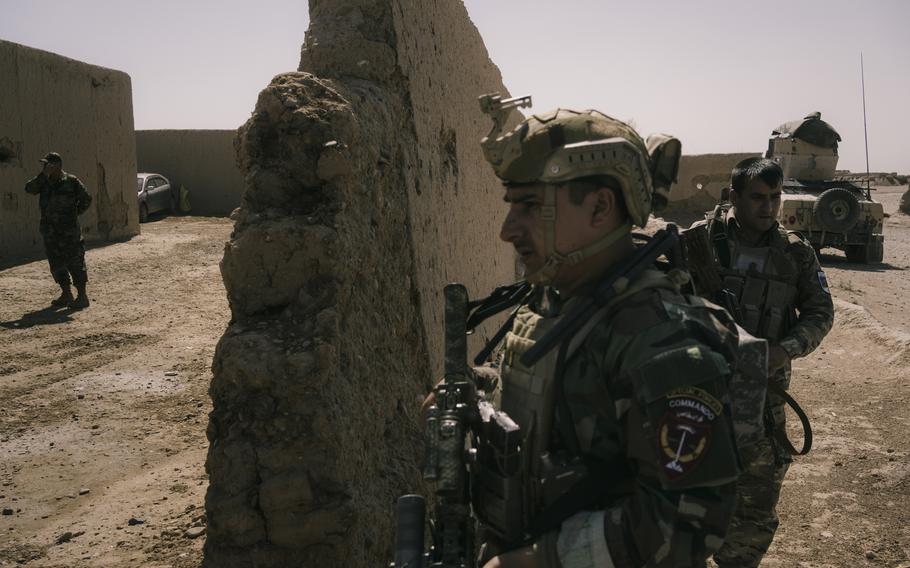 Afghan special forces on May 25, 2021, arrive at the Bolan Qala army outpost near the city of Lashkar Gah, where the fight against the Taliban has intensified. (Lorenzo Tugnoli/for The Washington Post) 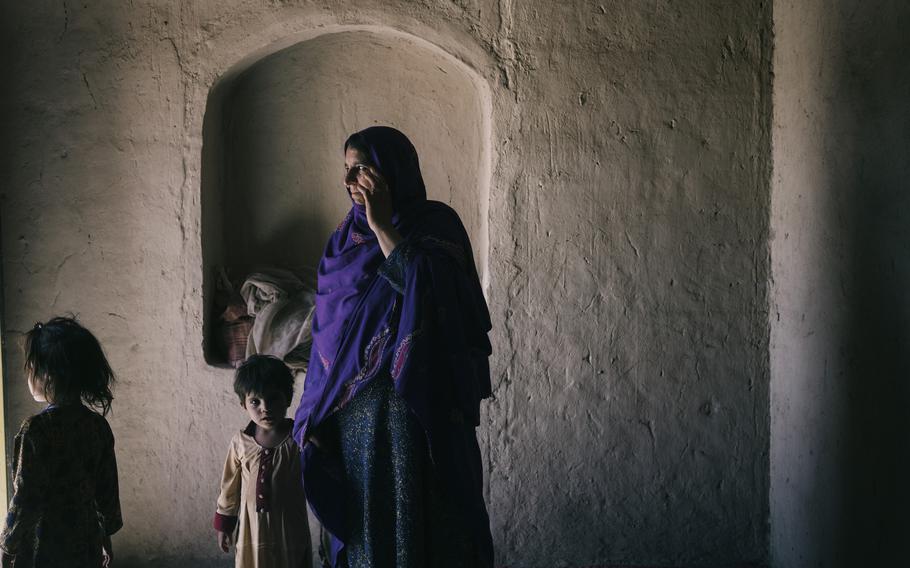 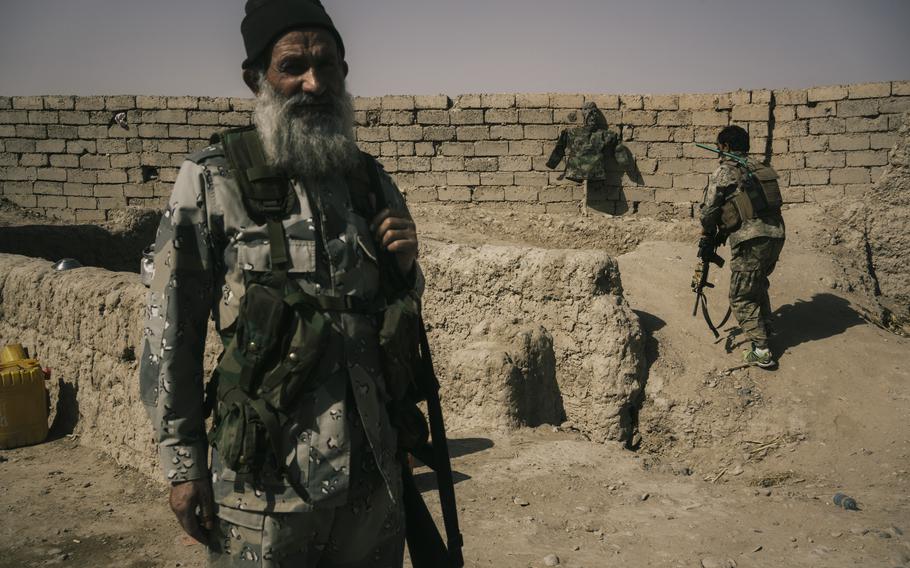 Afghan army soldiers occupy a position on the front line that is exposed to Taliban sniper fire at the Nazar outpost near Lashkar Gah on May 25, 2021. (Lorenzo Tugnoli/for The Washington Post)

Where combat has flared, the war's new phase has proved deadlier for government forces, Taliban fighters and civilians alike.

Last month, the airstrikes in Nawa drew so close to the home of a woman named Tajbib that explosions littered her garden with 2-foot-long pieces of burning shrapnel, she said. Then, Taliban fighters appeared at her gate and ordered the entire family to leave. But the street outside her home was in the middle of a battle.

"We were caught," recounted Tajbib, who has a single name and estimates she is in her 30s, as she huddled with the women and children of her extended family. After navigating around the fighting, however, the entire family managed to reach the government-held provincial capital on foot.

Families in her neighborhood say they have fled flighting several times over the years, but for many this was the first time the Taliban forced them from their homes.

When Tajbib returned, she discovered that her neighborhood had been turned into a Taliban garrison. Passageways were knocked between rooms and houses, smaller holes were punched through walls looking out on the street, and tunnels were dug connecting adjacent homes.

"I begged them, 'Don't do this,' but they said, 'You are the friend of Americans. Get out of here,' " said Tajbib's neighbor, in a similar account of being forced from her home by the Taliban. Fearing retribution, she spoke on the condition of anonymity.

As the neighbor, a slight elderly woman, fled, her son stepped on a roadside bomb. The blast killed him almost immediately, she said, recounting the story in wails of mourning and anger to a group of Afghan soldiers. Her son was one of the family's main breadwinners, and she pleaded for help from the troops to feed her grandchildren.

Civilian casualties were nearly three times higher in May than the month prior. More than 300 civilians were killed and over 690 injured in May, according to preliminary findings from the Afghan Independent Human Rights Commission. Children accounted for 378 of the civilian casualties in May.

In a series of tweets warning of heavy civilian casualties in recent days, the United Nations said indirect fire, Afghan airstrikes and Taliban explosives are killing many civilians.

The Afghan government does not disclose casualty figures for its forces, but local officials said casualties among Afghan troops in Helmand are about twice as high now as when the military had close U.S. air support. The officials spoke on the condition of anonymity because they were not authorized to release such information.

The Taliban is also suffering more losses. Sadat said his men killed or wounded about 700 Taliban fighters in Helmand over the past month. Local officials estimated the number to be closer to 300 but said this was still more than triple the Taliban casualties in previous operations.

"As we have said before, the best way to reduce civilian casualties is for all sides to reduce the violence," said Col. Sonny Leggett, a U.S. military spokesman based in Kabul, when asked about the spike in civilians killed or wounded.

When asked about any U.S. role in supporting Afghan forces in Helmand last month, Leggett said, "We have no operational announcements at this time." He continued, "Our mission is a safe and orderly withdrawal and to leave the [Afghan military] in the best possible position as we depart."

But the caliber of the forces that make up the Afghan military is wildly uneven. The vast majority of desertions and casualties suffered by government forces are within units that lack supplies and training. But the country's elite units — which make up just a fraction of the national security forces — have trained and worked alongside U.S. and NATO special operators for nearly two decades, and they display a deep commitment to fighting for their country.

Sadat is the product of some of that elite training. He attended military academies in Germany and Britain, has fought alongside U.S. Special Operations forces and says he will always have deep gratitude for the U.S.-led mission in Afghanistan. "None of this would even exist without the United States," he said, gesturing to his team of officers, their base and equipment.

But he sees the withdrawal of foreign forces as an "opportunity" for the Afghan government to fight the Taliban more freely. U.S. support in combat operations had many advantages, he said, but it also added bureaucracy, extensive coordination and many meetings. "We don't have to do that anymore," he said. "It's easier now."

Operating with more independence, Sadat said he is able to empower ground commanders to fight with less U.S. oversight. And with the Afghan air force now conducting the majority of strikes, there are fewer steps to approve and less need to deconflict air support.

Sadat said he now plans to accelerate military operations after months of stalled negotiations in Qatar with the Taliban — a period that he argued was used by the militants to strengthen their fighters on the ground. "Let me be clear, we gave a chance to peace, and it didn't work," he said.

Ultimately, he said he thinks the Afghan military can be more effective without the presence of U.S. troops and can defeat the Taliban in a matter of years.

Hasham Fedayee, a tribal elder from Helmand province, also disagrees with Sadat and expects that the rising wave of violence will continue for decades.

"The war is taking a new turn," he said, predicting the next stage of the conflict to be "internal" and similar to the years leading up to the outbreak of civil war in the 1970s. "And Afghans will continue to fight [for many years]," he said. "We have already been at war for four decades."

In Nawa, low-level fighting is continuing near Tajbib's home, although government forces have deemed the area "cleared." As she spoke, gunfire sputtered a few hundred yards away, and blasts from controlled detonations of roadside bombs sent shock waves through her modest front room, thrashing the pastel curtains hanging in the window.

"We don't feel safe, but we couldn't afford the rent in the city," she said, surrounded by about half a dozen children who appeared unfazed by the noise. They are fine during the day, Tajbib said. But at night when the airstrikes and artillery begin, she added, they often wake up screaming in terror.

She said she doesn't understand why the violence is becoming worse now that the United States is withdrawing. Without foreign forces in Afghanistan, Muslims should live together in peace, she said.

"Those who are fighting out there," Tajbib said of the government troops and the Taliban, "they are brothers."

The Washington Post's Aziz Tassal and Sharif Hassan in Kabul contributed to this report.