He watched two missiles destroy his Gaza bookshop. ‘It was like I had my child in there’ 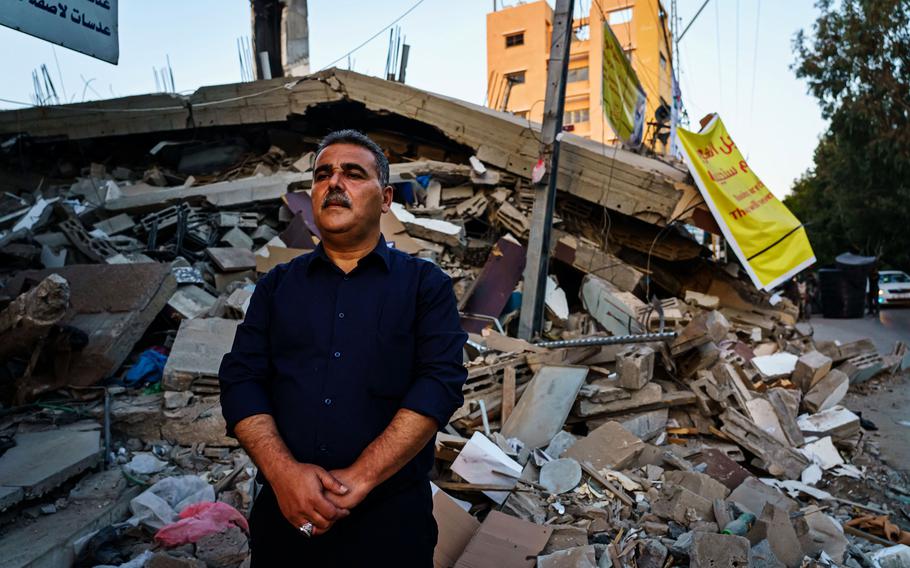 Samir Mansour stands before the remains of his bookstore in Gaza City on Wednesday, May 26, 2021. The bookstore, a Gaza cultural lodestar, was destroyed in an Israeli bombardment during the last escalation, which lasted 11 days between Israel and Gaza military factions. (Marcus Yam, Los Angeles Times/TNS) Police officers inspect the ruins of Samir Mansour's bookstore and nearby buildings, which were destroyed by Israeli bombardment during the last escalation between Israel and Gaza military factions, in Gaza City on Saturday, May 29, 2021. (Marcus Yam, Los Angeles Times/TNS) Police officers inspect the ruins of Samir Mansour's bookstore, as well as nearby buildings that were destroyed by Israeli bombardment during the last escalation, which lasted 11 days between Israel and Gaza military factions, in Gaza City on Saturday, May 29, 2021. (Marcus Yam, Los Angeles Times/TNS) Samir Mansour gathers books from the rubble that was once his bookstore, a Gaza cultural lodestar, destroyed in an Israeli bombardment during the last escalation, which lasted 11 days between Israel and Gaza military factions, in Gaza City on Wednesday, May 26, 2021. (Marcus Yam, Los Angeles Times/TNS)

For days, Gaza had been subject to Israeli bombardment, a relentless aerial assault that turned towers, boulevards and commercial districts in an instant into rubble-filled craters. Now, according to the Israeli soldier's voice coming through Mansour's cellphone in accented Arabic, it was the turn of the six-story Kuheil building, which had housed Mansour's bookshop and publishing house since 2008. He had 10 minutes to get out.

Mansour, 53, wasn't there. He was at home, a little more than a mile away, and watched, as if in a trance, a live broadcast of the first missile smacking into the building. He got dressed and headed to the bookshop, thinking he might still have time to save some of the more than 100,000 books inside, or at least salvage from his computer hard drive the designs for manuscripts he was soon to publish.

Arriving at the site, he saw that the rear of the building had already collapsed. Then, as he strode past a line of onlookers, a second missile hit, demolishing the rest.

"It was like I had my child in there," Mansour said. "Like my soul came out of me."

Days after the armed confrontation between Israel and Hamas ended in an uneasy truce, the 2 million people sardined into this impoverished coastal enclave are trying to map out a Gaza transformed yet again by war. Among the litany of loss — at least 248 people dead, tens of thousands more displaced, over 1,000 housing and commercial units damaged — is the destruction of the Samir Mansour Bookstore, a place that for many here was a cultural mecca.

"It's a crime," said Yusri Ghoul, a Palestinian novelist from Gaza who had four of his books published by Mansour. "The occupation wants to send the message that 'even your books, even the Palestinian narrative, we will destroy.'"

The bookstore's location on Thalatheeni Street, an easy walk from Gaza's top universities, made it an essential stop for thousands of students, said Ali Abdul Bari, a Gaza-based social activist.

"It's in the memory of every person who went to university here," Abdul Bari said, adding that he would go there often to buy books on culture, literature and economics both for himself or as gifts for friends.

For Mansour, who began his apprenticeship with his father at 14, the shop was his way of branching out further on his own, of building a reputation beyond the family publishing business.

"The loss is indescribable. … I went up the ladder step by step, and now I'm back down to zero," he said.

He established his first bookshop in 2000 on Gaza City's Wahda Street, a small store that still stands today. He didn't have much capital to start, he said, but after eight years, with an eye to the student foot traffic from the universities, he opened up what he came to consider the main branch, expanding to occupy the first two floors of the Kuheil building — a 1,700-square-foot space — with a staff of 16 employees. It eventually constituted 70% of his business.

His favorite spot was his office. There, Mansour would meet with authors to discuss their new works, hash out contracts or pore over the minutiae of book layouts.

"A book's smell, its title, the design cover … everything has a memory for me," he said.

He eventually built a roster of more than 100 authors. But he also spent much of his time on the road, collecting books in Arabic and English that — with Gaza subject to a crushing blockade by Israel and Egypt since 2007 — you couldn't find anywhere else.

"I remember my father, when I was a kid, it was always two weeks here, two weeks in Egypt. He was always coming and going," said Mansour's 21-year-old son, Mohammad.

"Instead I worked. And now it's gone."

Another leading bookshop, Iqra'a, was also destroyed. Refaat Areer, an English literature professor at the Islamic University of Gaza, said that half the books in any Gaza resident's home library would probably have been sourced at those two establishments. Mansour's store was particularly good at stocking English-language titles and bestsellers.

"To many young Palestinians, this is a blow to their favorite places," Areer said. "When we started our book club 10 years ago, the first thing we did was go to Mansour and check what English books he sells so we could plan our reading lists accordingly. With these bookshops gone, it means fewer books coming to Gaza and fewer people will be reading books."

A week after the airstrike, Mansour drove to where his shop once stood. The force of the blasts had pancaked all six floors. Only an elevator shaft remained standing, its green doors at the top comically still in place, portals to nowhere. Already, men in dust-covered overalls were scurrying over the mountain of rubble, scavenging and dumping whatever they could sell onto a nearby donkey cart before the municipality cleaned everything up.

"I'll save these. They'll be a sort of museum piece," he said.

In the days before the missiles hit Mansour's bookstore, the neighborhood had taken several airstrikes, one of them hitting the road right in front of the Kuheil building. Still, Mansour said, he had never expected his store would be a target.

The Israeli military said the building was targeted because Hamas, the Palestinian militant group that rules the Gaza Strip, had used it as an intelligence-gathering and weapons-production site. That was news to Mansour and others who worked or lived there.

"When the doorman called me after the Israeli military warned him, I asked if he was sure it was the right Kuheil," said Ramadan Najili, 35, who owned a print shop in the building's basement and had lived in one of the apartments there since 2015.

He pointed to the United Nations compound across the street. "I thought it was safe here because of the U.N. I was going to tell my family to come and shelter here during the conflict," he said.

News of the destruction of Mansour's shop has spread to book lovers well beyond Gaza. A GoFundMe page set up by two human rights lawyers has amassed more than $188,000 toward its goal of $250,000 to rebuild the store.

"We've seen a lot of support. I've had cultural places named after me, and people getting in touch all over the world," Mansour said. "But whatever I get, it won't compensate for the time that it took to build this. That has another taste, another feeling."

Still, he plans to start rebuilding soon. At first he thought he would choose another location. Not anymore.

"I sacrificed so many things to create this. It has a special place for me," Mansour said. "Our solution is to restore things to what they were."