After the latest Gaza war, Jerusalem remains a spark for conflict 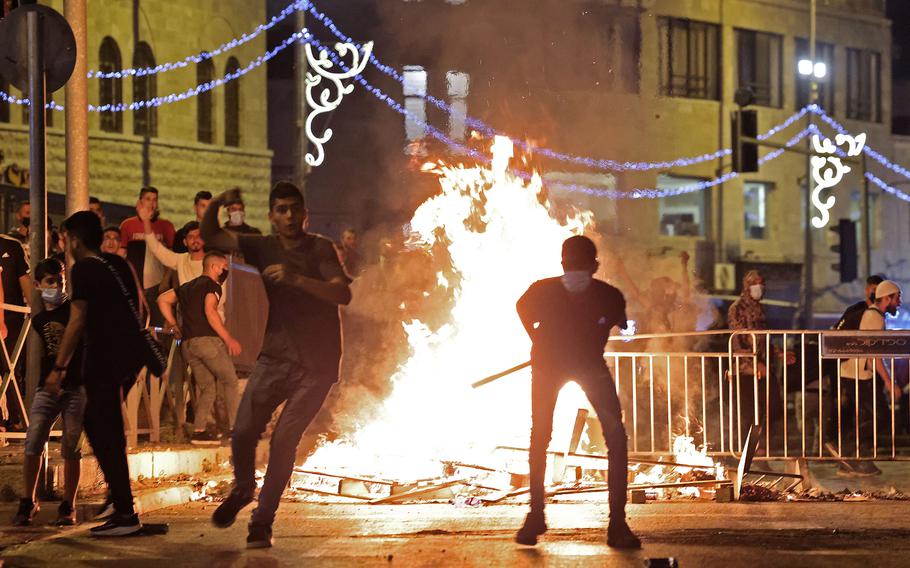 JERUSALEM (Tribune News Service) — In a city where streets bear the names of biblical prophets, what's foretold is almost always an echo of the past. Every conflict, including the one lately ended between Israel and Palestinian militants, reads as if an ancient passage from a worn and troubled book.

And Jerusalem, as always, is at the story's heart.

The alleys are tight, the tragedies many. Prayers of one faith mingle with those of another. Hot desert air warms cool stone walls. Today's battles have new voices, but there is familiar enmity over the future of the city where Jesus once walked, where black-clad Orthodox Jews sway in worship at the Western Wall, and the call of the muezzin drifts over spires and rooftops.

With its contested core of holy sites, Jerusalem was the symbolic touchstone of the 11-day round of bloodshed in May between the Israeli military and the Palestinian militant group Hamas. Going forward, the city remains the emotional center of gravity in the ongoing struggle.

The latest armed confrontation, which cost more than 260 Palestinian lives and 12 on the Israeli side, ended with a May 21 cease-fire. The truce has held so far. But rival bonds to the city — the elusive treasure, claimed by both sides as their capital — will almost certainly spark another battle.

"Everything paramount to the conflict can be found in Jerusalem," said Menachem Klein, an Israeli scholar who has written about the historical entwining of Jewish and Palestinian lives in the city.

Palestinians and their supporters attribute the latest outbreak of fighting in large measure to a concerted push by increasingly emboldened Jewish settlers, backed by legal mechanisms and the weight of the Israeli state, to change the demographics of Jerusalem — a process they liken to an ever-tightening belt of displacement.

"Dispossession is central to the Palestinian struggle, and Jerusalem is a microcosm of that," said Tareq Baconi, a researcher with the International Crisis Group.

Proponents of "judaizing" the city believe that the Palestinian share of the city's population — around 40% of its nearly 1 million inhabitants — is incompatible with millennia of Jewish history and tradition. To ensure Jewish primacy, they want to see that shrink, and the Jewish share grow.

"My goal is one: to bring Jews back to the Jewish homeland and the Jewish capital," said Aryeh King, Jerusalem's deputy mayor and a prominent settler leader. Anyone else is welcome to live in the city, he said — "as long as they accept that this is our holy place."

In a yearslong push that plays out daily, settler groups are establishing footholds in crowded, predominantly Palestinian neighborhoods such as Silwan, set in a steep valley southeast of the Old City, and Sheikh Jarrah, a short distance to the north of the old walls, where the prospective eviction of Palestinian families helped fuel the fighting that broke out May 10.

"Is it from a dimly lit stone that wars flare up?" the late Palestinian poet Mahmoud Darwish asked in a still-apt verse titled "In Jerusalem." The poem ends with the speaker's shouted encounter with an Israeli soldier.

Tensions over the city prompted a warning last week from the visiting U.S. secretary of State, Antony J. Blinken, who told Israeli officials that confrontations between Israeli police and Palestinians in and near holy sites in the Old City, coupled with looming evictions in Sheikh Jarrah, could set off a new round of conflict.

The U.S. message, according to Israeli officials familiar with the talks, was received with irritation by the government of Prime Minister Benjamin Netanyahu.

Early in the latest spasm of fighting between Israel and Hamas, both sides made clear Jerusalem's central role in the conflict, which saw the militants fire thousands of rockets at Israeli towns and cities.

Most of the Hamas-launched projectiles were intercepted by the Iron Dome missile-defense system, but the fighting briefly paralyzed bustling Tel Aviv, the country's commercial capital, and in Gaza, Israeli airstrikes meant to decimate the command structure of Hamas left whole city blocks in ruins. The Palestinian dead included more than 60 children.

Before the fighting began, Hamas demanded an end to what it called Israeli provocations in and near the Old City's Aqsa mosque compound, which was raided by Israeli police during the Muslim holy month of Ramadan.

Israel's bombardment of Gaza began hours after Palestinian militants' opening salvos on May 10 took rare aim at Jerusalem, and the Israeli military operation was code-named "Guardian of the Walls." Hamas, which governs Gaza, called its own campaign "Sword of Jerusalem."

By explicitly linking its rocket attacks to Israeli actions in Jerusalem, Hamas sought to position itself — not the Palestinian Authority, the West Bank's governing entity, which is internationally recognized but scorned by many Palestinians — as the protector of the city's Muslim holy sites, and by extension, of larger Palestinian interests.

Though focused on Jerusalem, the conflict did little to alter the parameters of the intimate, close-quarters struggle waged in and near the Old City.

"What was resolved by this fighting? Absolutely nothing," said Dahoud Ghoul, a 37-year-old Palestinian from Silwan whose family is battling in court to prevent Jewish settlers from taking over a plot of family land.

In the meantime, he said, he despairs.

"All my dreams are here, but while there is this theft occurring, they are only dreams," he said.

At the same time, Jewish activists vowed to redouble efforts to win unfettered access to the raised plateau in the Old City that Jews revere as the Temple Mount and Muslims venerate as Haram al Sharif, or Noble Sanctuary, the third-holiest site in Islam.

"Why should Hamas fire rockets at Israel because a couple hundred Jews are walking around on the Temple Mount?" said Yisrael Medad, a U.S.-born Jewish activist. On the status of both the sacred plateau and the city as a whole, he said bluntly: "We can never agree."

For all that can appear constant and unchanging in Jerusalem — the curve of an ancient stone arch, the gnarled roots of an olive tree — the cycle of conquest has gone on for centuries. "The city has been destroyed, rebuilt, destroyed, and rebuilt again," the late Israeli literary giant Amos Oz wrote in his 2004 memoir, "A Tale of Love and Darkness."

"Conqueror after conqueror has come, ruled for a while, left behind a few walls and towers, some cracks in the stone, a handful of potsherds and documents, and disappeared," Oz wrote.

But despite its timeless quality, the struggle for Jerusalem is rooted in specific aspects of Israeli law, which negates Palestinian rights to property owned before the 1948 Mideast war that led to Israel's creation. At the same time, Jewish ownership of property that was Jewish before 1948 is protected — something that Palestinians say is a cause of corrosive inequity.

Yasser Barakat, a venerable Palestinian antiquities seller in the Old City, pulled out a book with intricate architectural drawings of one of his family's homes in a lush Jewish neighborhood in West Jerusalem. There is no hope of ever reclaiming it, he said – but what rankles more for him is newcomers who cite prewar claims of their own in Palestinian neighborhoods.

Bernard Avishai, a Jewish Canadian-born academic and author who is a close friend of Barakat, said he feared for the Jerusalem they both love. In the aftermath of the latest fighting, he likened the city to a volcano "ready to blow."

Some longtime observers of the conflict, though, consider Jerusalem a source of not only peril, but opportunity.

Eliezer Yaari, a native of the city who was one of Israel's best-known television broadcasters before devoting himself to civil-society work and writing, is among those who picture Jerusalem as an eventual entity somewhat akin to the Vatican, with protocols meant to protect the rights of all religious faiths.