For Gaza shop owners, building back could take years 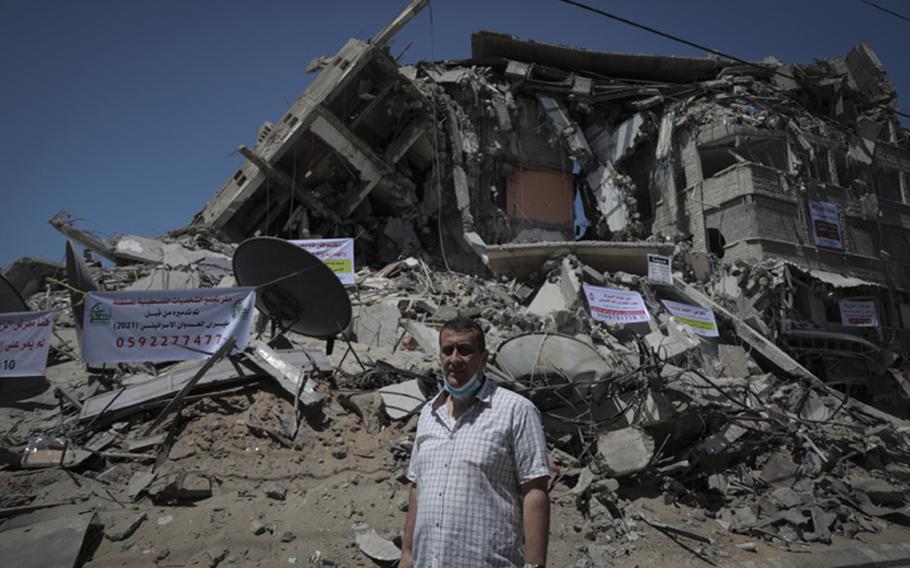 Naji Dwaima, owner of Dwaima’s for Watches, stands on Sunday, May 23, 2021, in front of the rubble of a Gaza City building bombed by Israeli aircraft. (Loay Ayyoub/For The Washington Post) 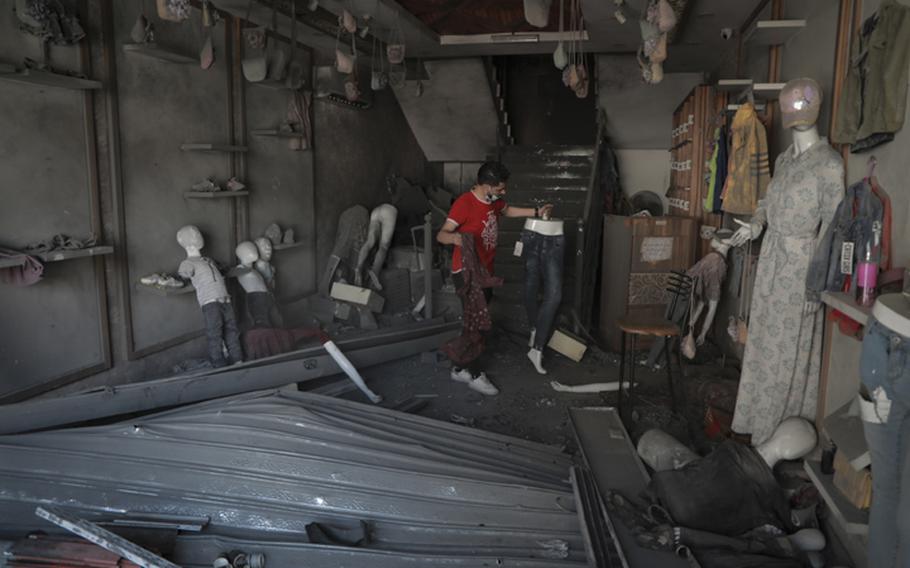 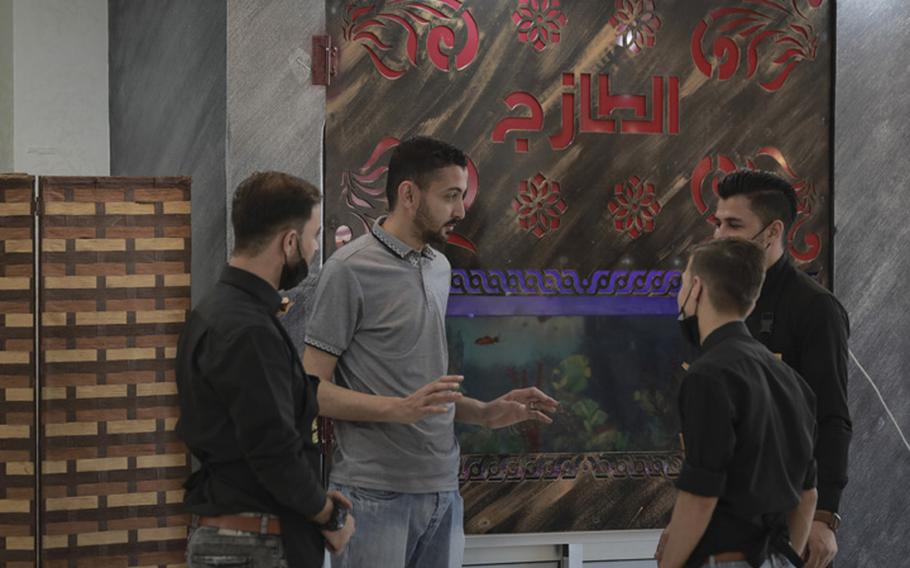 Omar Abukarsh, owner of Fresh Food, talks to the staff inside the Gaza City restaurant Sunday, May 23, 2021. (Loay Ayyoub/For the Washington Post)

GAZA CITY, Gaza — Naji Dwaima's family is known as "the watch family" in Gaza, and on Sunday morning, he sat on a folding chair and stared at the spot where his watch store used to be. It was buried under 12 stories of rubble, destroyed, along with dozens of other shops, factories, banks and a worrisome chunk of Gaza's economy, by Israeli missiles.

On the third day of the cease-fire between Israel and Hamas, the bustle on Gaza streets was nearly back to normal, with undamaged restaurants and stores open and traffic in several parts of the city hustling and honking around missile craters.

But for many, a return to business, if a return is possible, will be months away. The loss of jobs and revenue to the devastation of the previous two weeks is expected to make the task of rebuilding Gaza's economy even more difficult.

Gaza was one of the poorest corners of the region even before the bombardment and the coronavirus pandemic. Before the virus hit, an estimated 80 percent of the population relied on international aid, according to Oxfam International. Youth unemployment, estimated at 50 percent, was perhaps the highest in the world, the group said.

More than 525 businesses were damaged or destroyed in the fighting, the Geneva-based Euro-Mediterranean Human Rights Monitor estimated. The toll included at least 50 factories, the group said, along with hundreds of small businesses, the backbone of Gaza's commercial life. Rebuilding those will take international aid and the willingness of owners, such as the watch family, to start over.

Dwaima, 46, said he came to sit by his ruined shop here on Omar Al-Mukhtar Street, one of Gaza's main commercial strips, in part because he didn't know, after 26 years of 13-hour days, six days a week, how else to spend his time.

He showed a cellphone video of his store as it stood, Dwaima's for Watches, a brightly lighted emporium of Casios, Siekos, wall clocks and one perfume rack, now pulverized beneath the flattened Al-Shorouk Building.

"This is as much my home as my home," he said. "All of my impressions, all of my dreams are attached to this place."

He got the call last week from the building's doorman. The Israeli Air Force had warned tenants to get out immediately — they said the building held Hamas military offices, and they were about to strike it.

He tried to get one final look at the shop, but his taxi became stuck in traffic. He had jumped out to run the last few hundred yards when he heard a massive explosion. Looking up, he saw a fireball blast into the sky and knew the businesses that had allowed him buy a house, raise six children and send three daughters to university had become a casualty of war.

In the 2014 war with Israel, Dwaima's family home had been destroyed by a missile, he said. But losing the business he started when he was 18 was even more painful.

"We are all alive, thank God, that is the important thing," he said. "But this was my life, too."

Even before Hamas began launching thousands of missiles into Israel this month and Israel responded with its massive bombardment, Gaza's business owners were struggling through a year like no other. The pandemic and several lockdowns had cut Dwaima's revenue by 40 percent, he said. Many small shops failed.

But when the most recent lockdown ended in early May, owners looked forward to Eid — the celebratory end of the Muslim holy month of Ramadan and the biggest retail stretch of the year — to boost sales. Dwaima ordered $60,000 in new inventory from dealers in China and the West Bank.

"It's our main season," he said. "We were optimistic."

"We are still in shock," said Hossain Salem, 28, the owner of Lavender, a clothing and accessories shop across the street from Dwaima's.

Salem had expected Eid to improve his bottom line for the first time in months. Now he was looking into the blackened cave that was his store, where sooty handbags hung above toppled mannequins and twisted metal.

Salem, like other shop owners, is counting on international aid and donations to provide some compensation, but he doesn't know if he will start over. Health officials warn that Gaza now faces a third wave of covid infections spurred by shelters that were overcrowded during the bombing.

"We will wait now," he said, lifting his hands in resignation.

For some retailers, the cease-fire Friday came just in time.

Omar Abukarsh and his father had worked for months to launch Al Tazej — Arabic for "fresh" — an ambitious grill restaurant, in time for Eid. The bombs started falling two days after they cut the ribbon. They decided to stay open for take out for the few Gazans willing to venture into the streets.

"We are used to war here," Abukarsh said.

Since peace returned, he has been encouraged by an outpouring of support. On Saturday night, every table was full, the line for shawarma was long and families turned out in the holiday clothes that would have worn for Eid. His cooks carved and served more than 650 pounds of chicken, he said, even as Gaza's faltering electricity supply left them periodically in the dark.

"It was like Eid had only been postponed," Abukarsh said.

Sabir Nabahan was already gambling on an unusual business model when the fighting interrupted the opened Caramel, a sophisticated bake shop decorated in pink and teal.

Fired from his job in a clothing store, Nabahan, 62, became one of the few Gaza men to take up baking. He took an interest in his wife's pastries, particularly her ma'amoul, a traditional almond and pistachio cookie filled with dates or nuts.

His efforts were so good that he began selling them online. Two weeks ago, he and his son opened their shop — only to hear the first bombs fall two days later. Business came to a near halt. A few customers sent taxis to his house for cookies during the fighting.

"This is a busy street," he said Sunday, as the cars and donkey carts snaked by. "They will find us, inshallah."

For Dwaima, the watch shop was part of a family legacy.

His father was a teacher in the 1970s when he was arrested by Israel for teaching Palestinian nationalism, he said. After that, he scratched out a living selling watches to friends and neighbors.

He was good at it, and was soon traveling all over Gaza and the West Bank with his timepieces. He opened his first store in Gaza's Old City in 1979. His sons followed; now six of Dwaima's brothers are in the watch business.

His father still worked in his store, Dwaima said, along with his own son Mohammed, 22. They will all be working together soon, he pledged.

"I signed a lease yesterday," he said, pointing to a side street a block away. "What else can we do but work?"

The Washington Post's ﻿Miriam Berger contributed to this story from Jerusalem.