Inside the urgent push to arm Ukraine for a spring offensive 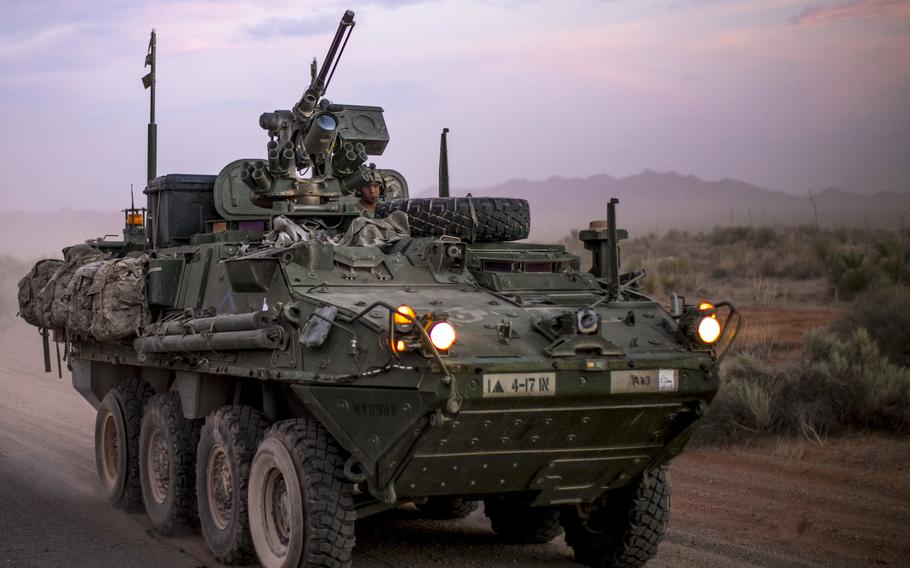 A Stryker armored personnel carrier assigned to the 1st Brigade Combat Team is driven during a field exercise. The Department of Defense is providing Ukraine with critical capabilities to defend against Russian aggression. (Tin Vuong/U.S. Army)

Late last fall, as Pentagon officials were patting themselves on the back over a series of U.S.-supported Ukrainian battlefield victories, two abrupt changes took place in the war with Russia. Moscow began launching waves of missile and drone attacks on civilians and infrastructure across the country. And on the front lines, Russian forces radically stepped up their assault on the small eastern city of Bakhmut, while reinforcing their defensive lines in the south.

Those actions forced Ukraine’s Western partners into a dramatic reassessment of the progress of the war and the direction it is likely to take this coming spring. As a result, the United States and its partners decided in just the last few weeks to embark on a far more aggressive phase of support, agreeing to supply a level of assistance they had long denied Kyiv.

The United States — along with France, Germany and the United Kingdom — have committed to the transfer of armored vehicles, their most advanced air defenses, and large-scale troop training programs. These decisions reflect a new urgency, and a belief that if Ukrainian forces are not equipped to make significant new gains in the coming months, they may face an endless war of attrition or worse.

On the eve of Friday’s meeting of the Ukraine Defense Contact Group — a regular gathering of senior defense officials from Kyiv’s Western backers — in Ramstein, Germany, the United States announced a new drawdown of up to $2.5 billion in weapons, including another 59 Bradley Infantry Fighting Vehicles and 90 Stryker armored personnel carriers, along with hundreds of other vehicles and millions of rounds of artillery, mortar and small arms ammunition. The package follows $3 billion authorized just two weeks ago, and brought the U.S. total over the past year to nearly $27 billion in military aid.

“This is the time,” British Foreign Secretary James Cleverly said during a visit to Washington on Tuesday, following his government’s announcement it would ship 14 Challenger 2 main battle tanks to Ukraine. “If we want to bring this to a conclusion, we have to do it quickly . . . at this point in time . . . to give Ukraine the tools they need to get the job done.”

“Something needs to break this deadlock,” said one of nearly a dozen officials The Washington Post talked to in the United States and Europe, some of whom spoke on the condition of anonymity about the accelerated policy process.

The government in Kyiv could not agree more. “There is a growing understanding, almost a conviction by now within the coalition of our allies, that you cannot stop an enemy like [Russia] by negotiating with them or being afraid of escalating,” said Yuriy Sak, an adviser to Ukraine’s Defense Ministry. “You stop them by defeating them. The enemy is ruthless.”

At the Pentagon, Defense Secretary Lloyd Austin, a longtime Army infantry commander, had months earlier “asked us to look at the medium- to long-term requirements for the Ukrainian armed forces, not just where the fight was in summer and fall, where it might be in 2023 and 2024,” a senior defense official said.

“The notion that they need more air defense capability . . . and that they needed armored vehicles, was something we were looking at for a while,” the official said. That process was underway, when the nature of the fight suddenly changed.

“They’re clearly not just trying to turn the lights out across Ukraine,” Colin Kahl, the Pentagon’s policy chief, told reporters Wednesday of the ongoing bombardments. “They’re also trying to exhaust the ability of Ukrainian air defenses to continue to protect Ukrainian airspace. . . . And as a consequence, we’re committed . . . to making sure that the Ukrainians remain viable.”

U.S. officials caution that the Patriots — on which Ukrainian forces just began an abbreviated 90-day training course in Oklahoma — will not arrive for some time, and that other systems will be required for a “layered air defense” that can operate at various ranges.

But the Patriot decision, followed by similar air defense commitments from Germany and the Netherlands, was relatively easy compared with determining how to respond to Ukraine’s increasingly public demand for heavy battle tanks for offensive operations on the front lines.

The United States, in consultation with “core” allies Britain and France, was closely following the battle around Bakhmut, a city in Ukraine’s eastern Donbas region that was locked in back-and-forth fighting. The combat was becoming what military officials called a “meat grinder” for both sides, as Russian forces — consisting largely of the Wagner group of mercenaries and released convicts — had sharply escalated their assault against Ukrainian defenders.

In the south, Russian army troops had retreated in mid-November across the Dnieper River from Kherson, the first city they had conquered after the February invasion. But as Ukrainians were celebrating its liberation, the Russians were steadily fortifying the opposite bank of the river — and the road to occupied Crimea — with rows of trenches, tank traps and new troops.

“The impetus for the Patriots . . . a lot of that was driven by current events,” the defense official said, as was “the impetus on getting a lot more infantry fighting vehicles, tanks, whatever capability could enable the Ukrainians to break the World War I, trench-warfare dynamic going on right now and enable them to claw back.”

The need for that type of maneuver — emphasizing smart tactics and quality of weaponry over quantity — led to what Kahl called the “shift” in approach. Although U.S. and European militaries had long been training Ukrainian soldiers in small batches on how to operate some air defenses and artillery, by December the Pentagon had become convinced that to keep the Russians from advancing, and for Kyiv to mount new offensive operations, the Ukrainians needed to learn how to maneuver in large, combined units.

The tactics were tailor-made for the expansive, Kansas-like plains and farmland spread across Donbas.

But there was little point in the expanded combat training without providing the weapons — especially tanks and armored vehicles — that the Pentagon’s own study said were necessary for success on the battlefield. Gen. Mark Milley, chairman of the Joint Chiefs of Staff, was hearing the same thing from his Ukrainian counterpart, Gen. Valery Zaluzhny. So was Jake Sullivan, Biden’s national security adviser, from Andriy Yermak, Ukrainian President Volodymyr Zelensky’s chief of staff.

The plan for training and new armored vehicles moved into high gear.

“A lot of this process is essentially internal to the DOD,” working with recommendations from the U.S. European Command on the ground in Germany, the defense official said of the approval process. “We have conversations with the interagency to make sure everybody is tracking,” including through National Security Council meetings with deputy and Cabinet-level officials. “Sometimes adjustments are made one way or the other, the recommendations go to the secretary of defense, the chairman comes in with his military advice, the secretary makes a decision” and it lands on Biden’s desk.

Discussion within the administration and with allies about sending tanks built additional momentum following Zelensky’s visit to Washington in December, said Jacek Siewiera, head of Poland’s National Security Bureau. “It’s absolutely obvious that this was the catalyzing discussion.”

The question, not resolved in the early planning, was where the heavy tanks would come from. Germany’s Leopard 2 was in use by about a dozen other countries, most of them in Europe, and could be quickly delivered. But Chancellor Olaf Scholz balked, saying that Germany did not want to “go it alone” by sending main battle tanks before any other country — particularly the United States — did so. Moreover, worried about upsetting Germany’s postwar reluctance to provide offensive weapons, Scholz refused to authorize the necessary approval for other countries to transfer Leopards in their own arsenals to Ukraine.

Austin was — and remains — dead set against providing U.S.-made Abrams M1s, the most powerful tanks in the world, to Ukraine. “It’s expensive,” said Kahl, noting that the tanks guzzle jet fuel and require serious training and maintenance.

Ukraine has barely managed to contain its irritation at that explanation. “For us, the key objective is getting Western tanks,” said Sak, the Defense Ministry adviser. “We are talking about human lives here. I don’t think it’s a good strategy to analyze consumption of petrol.”

At the same time, Biden approved providing an initial tranche of 50 Bradley infantry fighting vehicles to Ukraine. Austin will bring the new weapons package announced Thursday to the table when he meets with Ukraine’s military backers Friday in Ramstein.

Britain, whose announcement on Challenger 2 tanks came Saturday after a telephone call between Prime Minister Rishi Sunak and Zelensky, is so far the only country to promise the main battle tanks Ukraine says it needs. But 14 of them aren’t nearly sufficient to break through Moscow’s defenses.

“You can’t just snap your fingers on delivering several battalions’ worth of mechanized equipment,” the U.S. defense official said. “The Leopard is much more available and can be delivered on a much more relevant timeline.”

Attention has continued to focus on Germany, where Austin visited Thursday in a last-ditch effort to persuade Scholz. There was no public indication that progress was made, but Poland and other countries indicated they might go ahead and donate their tanks to Kyiv — even without German permission.

“You need to assemble a coalition of many different countries to get the numbers needed,” said Gustav Gressel, a defense expert at the European Council on Foreign Relations who estimated around 200 tanks could be assembled in a Europe-wide effort, with around 80 deliverable by early summer.

Zaluzhny, Ukraine’s military chief, has said about 300 tanks would be needed to shift momentum on the battlefield.

Asked if the United States would object if Poland and others decided to bypass German acquiescence to send the Leopards, the U.S. defense official said, “It’s important that the allies and partners remain united. At the end of the day, the Poles and the Germans are going to work it out. It’s not our call.”

The Washington Post’s Emily Rauhala in Brussels and Alex Horton in Washington contributed to this report.