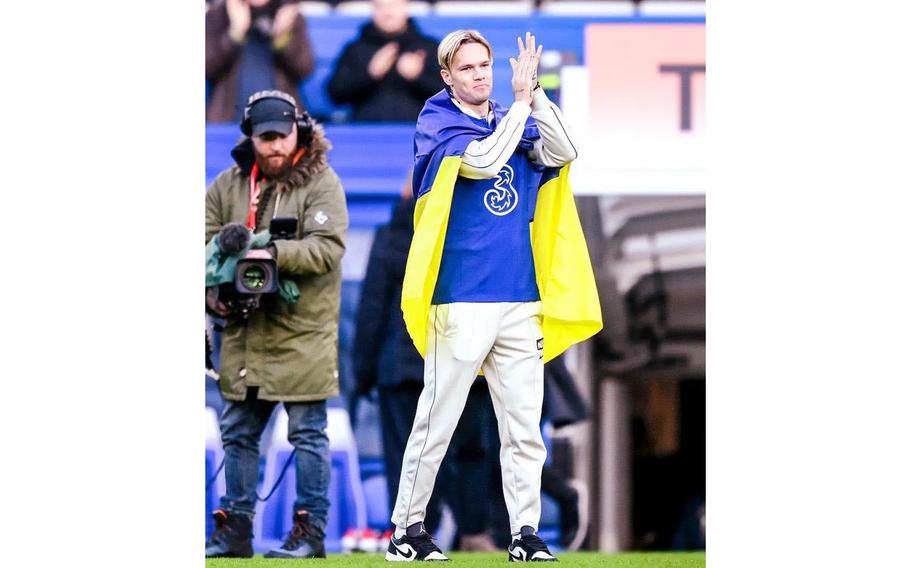 Mykhaylo Mudryk is draped in a Ukrainian flag Sunday, Jan. 15, 2023, as he is introduced to 40,000 fans at Chelsea’s Stamford Bridge stadium during half-time at the London club’s match against Crystal Palace. (Mykhaylo Mudryk/Facebook)

Ukraine's armed forces will get $25 million from the country's richest man for the sale of soccer player Mykhaylo Mudryk to football club Chelsea FC.

Billionaire Rinat Akhmetov, the owner of the Shakhtar Donetsk football club, announced the donation on Monday after agreeing to trade Mudryk for about 70 million euros ($76 million), plus a potential bonus of 30 million, a record amount for a Ukrainian team.

An industrialist whose businesses include the Azovstal steel plant that was destroyed by Russia's assault of the Ukrainian city of Mariupol, Akhmetov moved Shakhtar from its home city after Donetsk was seized by Kremlin-backed separatists in 2014.

"I am allocating $25 million today to help our soldiers, defenders, and their families," Akhmetov said in a statement on Monday. The money will be used for needs "from providing medical and prosthetic treatment and psychological support to meeting specific requests," he said.

On the other side of the deal is Chelsea, which was sold by sanctioned Russian oligarch Roman Abramovich following Russian President Vladimir Putin's invasion of his former Soviet neighbor last year.

Mudryk was draped in a Ukrainian flag Sunday as he was introduced to 40,000 fans at Chelsea's Stamford Bridge stadium during half-time at the London club's match against Crystal Palace, a sign of continuing change at the west London club.

In the early years of Abramovich's reign, which began in 2003, the stadium loudspeaker would blast out the Russian folk song Kalinka in honor of its former owner. When the invasion began, some fans waved Ukrainian flags, and the club also signified support for Ukraine, even in the final weeks of Abramovich's ownership.

The war has killed tens of thousands of Ukrainians, driven millions from their homes and left millions more without electricity, heat and water. It has also devastated Ukraine's economy and cratering the wealth of many of its powerful billionaire elite.

Akhmetov, who before Ukraine's 2014 Revolution of Dignity supported Ukraine's pro-Russian government, was blamed by many of his compatriots for not doing enough to prevent the military conflict when separatists took over much of the Donetsk region. His fortune has shrunk to $5.5 billion from $10.8 billion before Russia attacked last year, according to Bloomberg estimates.