Russian yachts and money are going where US influence has waned 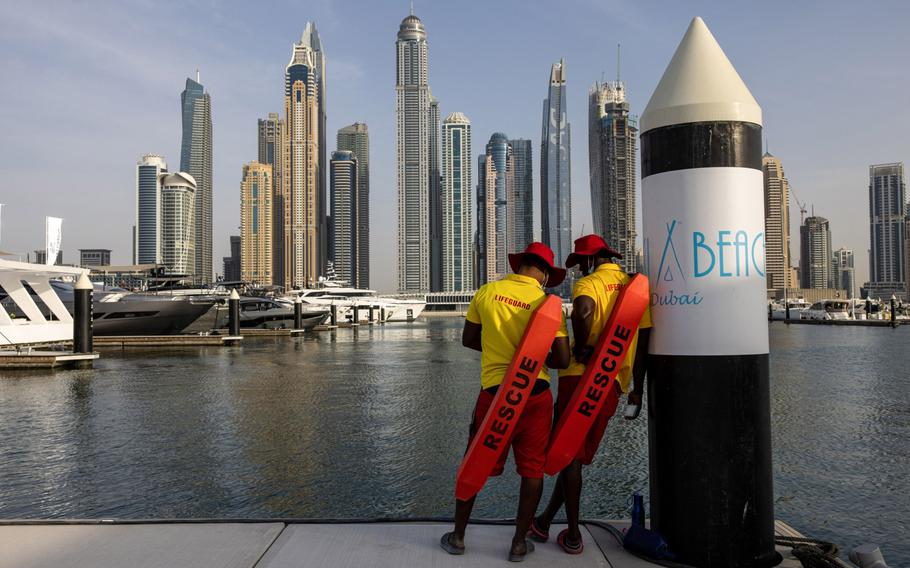 Andrey Melnichenko was in a bind. Squeezed by European sanctions targeting Russian billionaires, one of Russia’s richest men needed a safe jurisdiction to protect the businesses he’d built. He found it in the United Arab Emirates.

Moscow-based coal producer SUEK and Zug, Switzerland-based fertilizer firm EuroChem, both founded by Melnichenko, are opening local trading units in the Gulf oil exporter, according to five people with knowledge of the matter. The 50-year-old resigned from the boards of both companies ahead of EU sanctions imposed over his alleged ties to the Kremlin. Swiss authorities said in May they’d unfrozen EuroChem’s accounts after Melnichenko transferred ownership to his wife.

Already spending more time in Dubai, Melnichenko moved his $300 million Motor Yacht A to the city in December, keeping it there through early March, according to Bloomberg tracking data. It was last spotted off the UAE’s Ras Al Khaimah. His other yacht was seized by Italy in March.

Spokespeople for Melnichenko and SUEK, Russia’s biggest thermal coal producer, declined to comment. EuroChem didn’t respond to requests for comment. A Melnichenko spokesman said after the EU sanctions were imposed in March that he had no political affiliations and there was no justification for the measures. A government official told Bloomberg that the UAE takes its role in protecting the integrity of the global financial system seriously and works closely with the private sector to implement targeted financial sanctions and combat evasion in line with its international obligations.

The UAE is one of three Middle Eastern nations that have emerged as magnets for Russia’s wealthy since the Feb. 24 invasion of Ukraine, frustrating U.S. efforts to muster a unified front against Vladimir Putin. Already popular with Russians seeking warmer climes, Turkey and, to a lesser extent, Israel, have also become go-to destinations.

The newfound willingness of U.S. allies in the Middle East to go their own way follows years of festering resentments compounded by concern over creeping American disengagement. The depth of the fissures was exposed by the invasion of Ukraine, with U.S. allies as far afield as Japan and South Korea joining the campaign against Russia with their own sanctions and asset seizures, but key partners in the Middle East holding back.

“These three countries have historically been important allies to Washington,” said Norman Bailey, former senior director for international economic affairs at the White House’s National Security Council, who studies Russian money in the Middle East. “It shows the U.S. is steadily declining in influence.”

The UAE declined to condemn Russia’s invasion at a UN vote. Along with Israel, it’s been critical of the Biden administration’s effort to restore the 2015 nuclear deal with Iran, which both countries see as a security threat. Turkey, though a NATO power, is itself the target of U.S. sanctions over its purchase of Russian weapons. While it’s supplied Ukraine with drones, it’s also maintained ties with Putin and sought to play mediator.

The Biden administration has sought to mend ties across the region since the invasion, but, in another sign of waning influence, has failed to persuade Gulf allies to help temper soaring crude prices that are driving inflation higher worldwide. The UAE is part of OPEC, the oil exporters’ cartel that continues to coordinate output with Russia.

While some of Russia’s largest banks were cut off from the SWIFT international payments system following the invasion, sanctioned businessmen were able to move money through smaller banks to the UAE and Turkey, according to bankers, lawyers and officials with knowledge of the movements.

Many high-net worth individuals already had bank accounts in Europe and North America, which they used to route funds in danger of being frozen, they said. Wealthy Russians with top-notch connections were also able to funnel hard cash to the UAE, sometimes aboard private jets, they added, declining to give details.

Meanwhile cryptocurrencies have emerged as a way to transfer funds internationally with little oversight.

Even before the war, the UAE and Turkey were in the spotlight for lax oversight of foreign money. The Financial Action Task Force, the global financial crimes watchdog, placed them in March and October, respectively, on its gray list of countries not doing enough to counter dirty money flows. UAE officials say that their country remains open to businesses and investors from all over the world, though they constantly strive to strengthen the regulatory framework and combat financial crimes.

Turkey’s foreign ministry didn’t respond to requests for comment. Foreign Minister Mevlut Cavusoglu said at the Doha Forum in March that Russian billionaires would be allowed to do business in Turkey as long as it was in line with national and international law.

The scale of Russia-related flows has become more difficult to gauge as they’re driven from formal banking networks. Cash or crypto movements are easier to hide and transactions are often conducted through complex networks of shell companies designed to obfuscate, via blind trusts, family members or lawyers hired to help navigate sanctions.

With Ukraine pleading for more action, U.S. officials say they’ve discussed the possibility of secondary sanctions on Russian oil. Those would expose any country or business flouting U.S. sanctions to penalties from Washington. The idea is divisive, however, because it would hurt and may alienate some allies, especially those that rely on Russian gas and other commodities.

“There’s this whole geopolitical realignment happening,” said Jodi Vittori, a professor at Georgetown University who studies the nexus of financial flows and U.S. national security. “And I don’t think the U.S. has an answer.”

For now, the Biden administration has sought to close some loopholes by banning U.S. entities from providing accounting, corporate formation and management consulting services to any Russian entity. The U.K. has taken similar measures, making it harder for Western professional services companies to assist Russians looking for sanctions havens.

If the billionaires moving their assets to Dubai or Istanbul are worried about those jurisdictions, they’re not showing it.

At least four Russia-linked yachts have sailed to Turkey since the war began, according to Bloomberg tracking data. They include Chelsea Football Club owner Roman Abramovich’s Eclipse and My Solaris as well as mining magnate Iskandar Makhmudov’s Predator. Others were already in Turkey when war broke out.

U.K. and EU-sanctioned Abramovich also has a backup in Israel.

Israel’s financial system is tightly regulated. Safeguards in place to stop terror financing and money laundering have made it hard for Russians to transfer funds in through the banks, though they can still purchase property with relative ease, according to bankers, lawyers and real estate brokers.

The country also offers citizenship to Jews from around the world, making it an obvious choice for Russians of Jewish heritage. While Israel has taken in both fleeing Ukrainians and disillusioned Russians, a significant number of billionaires also qualify.

Abramovich, 55, got citizenship in 2018 after struggling to renew his U.K. visa and bought a $65 million mansion in Herzliya two years later. He also owns other properties there.

Israel drew a rare U.S. rebuke after images of Abramovich at Tel Aviv’s airport emerged in March, when Under Secretary of State for Political Affairs Victoria Nuland warning it not to “become the last haven for dirty money that’s fueling Putin’s wars.” Abramovich’s jet departed Israel for Turkey.

A spokesman for Israel’s foreign ministry said the country would not allow itself to be a route to bypass sanctions imposed on Russia by the U.S. and other Western countries, and has established a task force to ensure different sectors of the economy understand the sanctions and consequences of non-compliance.

Political concerns are also front of mind for Turkey. Russians accounted for a fifth of foreign tourists last year and Turkey buys almost half its gas from Russia. With record inflation prompting public anger a year ahead of key elections, it’s especially tough now for Turkey to turn away.

Sergiy Volchenkov, a partner at Tolerance Homes in Turkey’s Mediterranean resort of Antalya, said most of his clients were Russian and demand had soared five-fold since the invasion.

“Some buy up to 15 apartments in one go to get citizenship,” he said.

Since the invasion, Turkey raised the threshold for foreign property buyers to earn citizenship to $400,000 from $250,000. That’s still attractive especially for wealthier Russians in need of backup as the EU ends its “golden passport” programs.

Sales of homes to foreigners doubled in the first four months of 2022 from a year earlier, according to official data. In April, Russians topped the ranking of foreign buyers in Turkey for the first time.

Davut Cetin, head of the Antalya Chamber of Commerce and Industry, said the initial wave of middle-class Russians was being followed by bigger fish.

“They weren’t around for the past decade, choosing Western Europe instead,” he said. “After all those sanctions and confiscations, they can come back.”