Why allies are sending advanced combat vehicles to Ukraine, and how Kyiv will use them 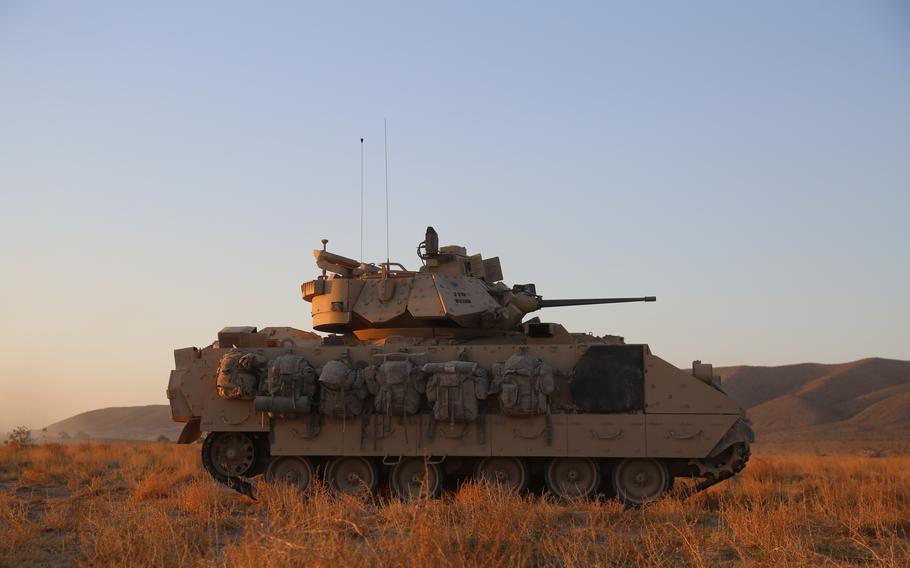 Ukraine's Western allies announced this month plans to provide the country with new fighting vehicles, the first of which are slated to arrive in the coming months, as Russia's full-scale war enters its second year.

The announcements signaled a new willingness on the part of the United States and European allies to help Ukraine reclaim territory captured by Russia, which condemned the move as an escalatory step.

"Right now the war in Ukraine is at a critical point," President Joe Biden said. "We have to do everything we can."

Here's what to know about the combat vehicles headed to Ukraine.

What are Bradleys, and do they count as tanks?

The M2 Bradley is an American-made infantry fighting vehicle — meaning it's intended to move and support foot soldiers. The first version was introduced to the U.S. Army in the 1980s.

Each vehicle is designed to carry a three-person crew and six soldiers as passengers, especially across open terrain. In addition to its main 25mm gun, it can be armed with an antitank TOW ("tube-launched, optically tracked, wire-guided") missile launcher.

Included in the $3 billion aid package the Pentagon unveiled last week are 500 TOW missiles and 250,000 rounds of 25mm ammunition to go with the Bradley vehicles.

The announcement set off a debate among military analysts over whether the Bradley is a tank. Retired colonel Mark F. Cancian, a senior adviser with the Center for Strategic & International Studies' International Security Program, argues that since the Bradley has light armor, tracks (rather than wheels), a medium gun and long-range capabilities, it's essentially a "light tank."

But many military experts say it does not meet the definition, partly because its gun is too small and the vehicle is not designed to engage other tanks. Ukraine has requested American M1 Abrams tanks — which are, most definitely, tanks — but the United States has not agreed to send them. There are "sustainment considerations with tanks," Cooper said on Friday. "Certainly we know that the Abrams tank, in addition to being a gas guzzler, is quite challenging to maintain."

Still, the Bradleys will mark a step up for Ukraine, with more firepower than the armored vehicles the United States sent earlier.

Armored fighting vehicles are typically faster and more agile than full-fledged tanks, and easier to fuel and maintain. And the Bradleys have "superb" night-vision sensors that are "better than anything that the Ukrainians have or the Russians have," Cancian said.

What fighting vehicles are France and Germany providing?

The Pentagon said the Bradleys would complement the vehicles Germany and France are providing.

German company Rheinmetall said it could send about 100 Marders once they're refurbished. The Marder, in service since 1971, has a 20mm automatic cannon and can be equipped with a guided antitank missile system. Six or seven soldiers can fit inside. The weapon system has been used in combat in Kosovo and Afghanistan.

Called a "light tank" by French authorities, the French AMX-10RC was developed in the early 1970s. Designed for carrying out reconnaissance, it's equipped with a 105mm cannon and runs on six wheels, rather than tracks. French and Ukrainian officials are still in talks about how many vehicles will be provided and when, according to the French defense ministry.

What impact could they have on the battlefield?

The fighting vehicles could help Ukraine scout out the positions of Russian troops, transport soldiers and fire on Russian armored vehicles.

"While none of these vehicles by themselves are going to determine the course of the war, they will — if they're employed properly and well supported in the field — provide Ukrainians with a big tactical advantage, particularly if the Ukrainians look to launch an offensive to recapture territory this year," said Sonny Butterworth, an analyst at Janes, the intelligence firm.

The French AMX-10s were designed during the Cold War for reconnaissance. The idea is the vehicle would fire its gun, forcing enemy troops to reveal their positions, and then the vehicle would "scoot off" since it lacked the protection of battle tanks, according to Butterworth.

The Bradleys and Marders also offer more advanced reconnaissance abilities than the Soviet-designed BMP1 and BMP2 combat vehicles Ukraine has been using. The optics on the Bradley can find and home in on targets at a greater distance and under more difficult climactic conditions, Butterworth said. They could help Ukrainian soldiers snipe, according to Cancian.

Critically, the Bradley and the Marder can transport troops into battle — and back them up with cannons.

The United States used Bradleys in its wars in Iraq in 1991 and 2003. "The U.S. Army was able to deploy armored divisions — which have tanks and Bradleys — and unleash these in long maneuvers, getting behind enemy forces, breaking through enemy forces," Cancian said.

For months, Western countries held back from sending tanks and sophisticated infantry fighting vehicles, concerned about provoking a more direct confrontation with Russia.

They hope the latest weapons packages, including the fighting vehicles, will help Ukrainians stave off potential Russian offensives in the months to come — and break through Russian defenses along the front line, which stretches hundreds of miles across eastern and southern Ukraine. With tracks meant for operating in open terrain, the Bradley is particularly well suited for battles in the farmland of eastern Ukraine.

"It's very much tied to the war that we're seeing on the ground right now and what we anticipate we'll see throughout the winter months," Kirby said.

Operating the Bradleys — as well as the Marders and AMX-10s — requires training, so it'll likely be a few months before they show up on the battlefield. The United States is offering a new training program that will train about 500 Ukrainian troops at a time and include guidance on operating the Bradleys, Cooper, the defense official, said.

Ukrainian forces have already proved capable of handling other complex equipment, according to U.S. officials.

"This is the right time for Ukraine to take advantage of its capabilities to change the dynamic on the battlefield," Cooper said.

It helps that the United States has a large number of Bradleys to spare, Cancian said — and that the Army is planning to phase them out in a few years. France is also in the process of phasing out AMX-10s.

Still, Ukraine hopes that the pledge to send fighting vehicles could mean allies are also ready to send tanks, such as the German-made Leopard 2. Poland said Wednesday it intends to transfer a company of Leopard 2 tanks to Ukraine. Britain, meanwhile, is reportedly considering sending about 10 Challenger 2 tanks.