Ukraine’s battlefields are freezing; here’s what that means for the war 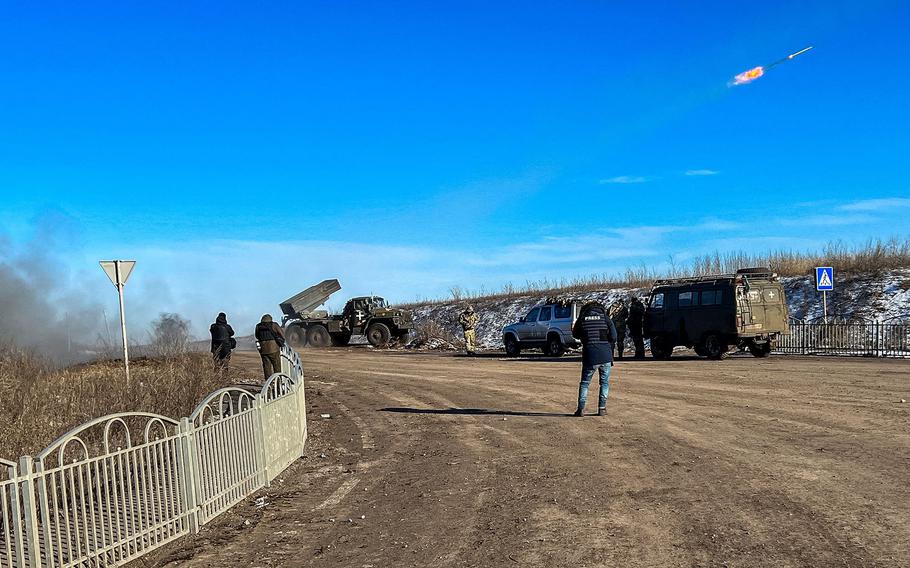 A BM-21 Grad multiple rocket launcher fires toward Russian positions on the front line near Bakhmut, Donetsk region, on Jan. 11, 2023, amid the Russian invasion of Ukraine. (Susannah Walden, AFP via Getty Images/TNS)

(Tribune News Service) — Temperatures in eastern Ukraine have been well below freezing in recent days, hardening the ground and opening a window for potential winter offensives by both sides.

But such pushes may not come, either now or during a more sustained cold spell.

Military analysts within and outside Ukraine say that while the shift from muddy to frozen terrain is important in enabling the use of wheeled combat and support vehicles, it’s just one of many factors commanders would consider before risking a major new assault.

More important are the availability of reserves, equipment and ammunition, and the need to create weak spots to exploit in enemy lines.

Both sides are being stretched by slow, but resource-sapping offensives already underway. Russian forces are trying to take Bakhmut and nearby Soledar, while Ukrainian troops are attacking Kreminna and Svatove; all are small-to-mid-sized towns in the eastern Donbas region that Russia claims to have annexed, but only partially occupies.

“The situation around Soledar and Bakhmut is forcing our command to use more reserves in this direction, so it may be that in the close future there won’t be enough left to conduct a big offensive in the south, from Zaporizhzhia, or anywhere else,” said Igor Levchenko, head of strategic modeling at New Geopolitics, a Kyiv-based think tank.

How the conflict evolves over the coming months is likely to be determined less by changes in weather than by the relative success each side has in wearing down the other’s forces and reconstituting their own by spring, Levchenko said.

The risk for Russia, according to a European defense official, is that in Bakhmut it makes only a minor tactical gain at the cost of huge personnel losses. A similar mistake in the summer left Russian forces exhausted and over stretched, opening the door for Ukraine to launch successful counter offensives in the fall.

Denis Pushilin, head of the self-proclaimed Donetsk People’s Republic, said on TV on Tuesday that Soledar, 10 km (6 miles) from the outskirts of Bakhmut, was close to being taken, though “at a very high price.” Claims later in the day from the Wagner mercenary group to be in control of all but a pocket in the center of Soledar could not be verified.

Though poorly trained, recently mobilized troops have shored up defenses around Kreminna and Svatove, slowing Ukraine’s advance. Taking Svatove would allow Ukraine to cut a key Russian logistics route for operations in the Donbas.

Newly announced supplies of armored fighting vehicles from the U.S., Germany and France, as well as growing signs that NATO standard tanks could follow, would better equip Ukraine for a fresh offensive. Officials in Kyiv, meanwhile, have expressed concern over the possibility of a renewed Russian attack from Belarus, just 150 km (93 miles) north of Ukraine’s capital.

Ukraine’s general staff have been “masters of operational design” to date and will spend weeks or months setting conditions for the next, decisive phase of the campaign, said Ben Hodges, a former U.S. Lieutenant General and commander of the U.S. Army in Europe, in emailed comments from Tbilisi, Georgia.

While Russia may aim to use mobilized recruits to prolong the war until support for Ukraine from its allies crumbles, “I don’t see that happening in 2023,” Hodges said. “Rather I see Ukraine liberating Crimea by the end of August.”

Russia’s President Vladimir Putin annexed the Crimean peninsula in 2014, turning it since into a support base for his forces in the rest of occupied Ukraine. Some military analysts have expressed skepticism at Ukraine’s capacity to retake it.

While falling temperatures have been hardening the ground in the east since Jan. 6, at -8 to -14 degrees Centigrade they’ve also been too low for soldiers to fight effectively while spending days away from shelter, as any offensive breakthrough would require.

“The human factor is far more important than the vehicles they can move” in winter, said Ed Arnold, a former British infantry officer now at the Royal United Services Institute, a London think tank. In freezing weather, morale, mobility and logistics all can get hammered, he said.

Frozen batteries for drones and radio sets have to be recharged twice as often, while low visibility can render unusable the surveillance drones needed for artillery to target defenses. With both sides running low on artillery shells, the need for precision offered by drones has already at times silenced guns along the front.

“What we call the ‘find’ aspect you need for any operation just becomes much more difficult,” said Arnold. “Even foot patrols that can normally cover 15-20 km in a day can suddenly only cover five, because they’re burning more calories, need to carry more food and just can’t do as much in the difficult conditions.”

Very low temperatures also can favor defensive troops that enjoy effective logistics, according to Arnold, enabling them to maintain warmth and stockpile food at frontline positions for as many as 20 days. Those are luxuries unavailable to an advancing force, which has to be resupplied in real time by trucks that use the same makeshift tracks repeatedly, quickly degrading them.

The cold also can force errors, such as Russia’s decision to concentrate hundreds of troops in the relative warmth and comfort of a dormitory in Makiivka, within range of Ukraine’s HIMARS rockets. That saw 89 killed in a New Year’s attack, according to Russia’s defense ministry, many more according to Ukraine.

Most worrying to military planners, according to Arnold, is that a freeze can suddenly turn to thaw, leaving offensive troops exposed and unsupplied as wheeled support vehicles again become stuck in Ukraine’s notoriously glutinous mud. Tracked vehicles, such as tanks, can still operate, but not if fuel tankers can no longer reach them.

Soldiers, similarly, would then be left without food, and artillery without ammunition or the ability to quickly move position after firing, so as to evade counter-battery fire. Temperatures in the east are forecast to rise above freezing again as soon as next week.

“The Ukrainians have a much better option,” said Arnold. “I would say that with what they already have and everything the West is giving them, they have one chance at a big push — so don’t go early.”

The Bakhmut fighting is likely to remain intense regardless of weather, because Russian commanders have shifted tactics, relying on foot soldiers to punch through defenses, rather than the massive artillery barges followed by mechanized assaults that slugged their way through Ukrainian lines in the Donbas last summer.

While Bakhmut has relatively small strategic significance, Russian commanders appear determined to take it regardless of cost, while Ukraine’s Commander-in-Chief of the Armed Forces Valeriy Zaluzhnyi said in a December interview with The Economist that his nation’s top priority was to cede no more territory. “It is ten to 15 times harder to liberate it than not to surrender it,” he said.