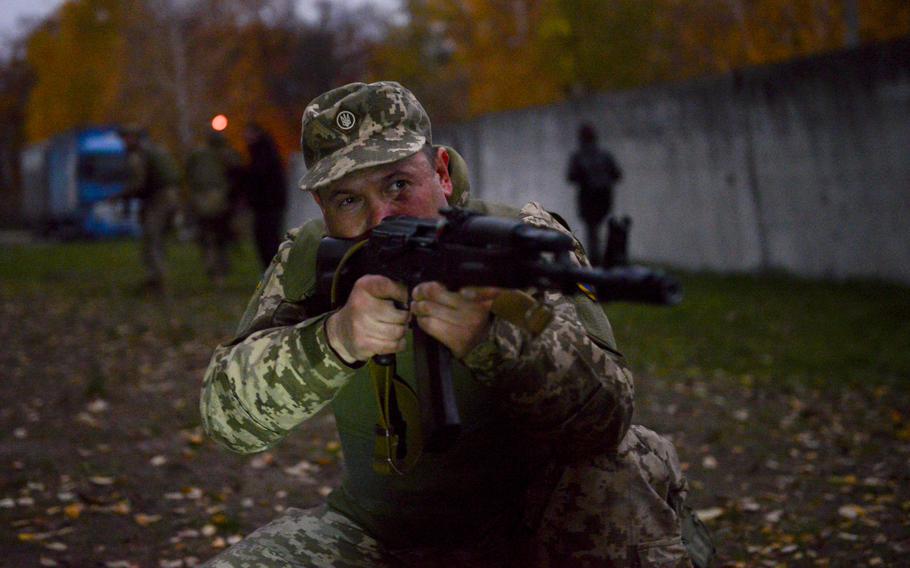 A Ukrainian soldier covers for his squad under simulated fire as they retrieve a casualty during training at a site on the outskirts of Kyiv, on Oct. 27, 2022. (J.P. Lawrence/Stars and Stripes)

RIGA, Latvia — Despite heavy combat losses over ten months of brutal war, Russia now has more than double the number of troops poised to fight in Ukraine as it did when it invaded in February, including thousands of convicts released from prison and conscripts from a controversial mobilization drive this fall.

According to a new U.S. assessment, the Wagner mercenary group, which fights alongside regular Russian troops in Ukraine, in recent months recruited 40,000 prisoners from all over the country into its ranks. Together, with 300,000 new conscripts and 20,000 volunteers, Russia’s force is now more than double the 150,000 initially allocated to what President Vladimir Putin termed a “special military operation.”

The larger Russian force, even after losing an estimated more than 25,000 killed in action and tens of thousands more wounded, backs up Putin’s oft-repeated pledge to press forward until his military objectives in Ukraine are met, even as military experts widely question the level of preparedness and morale among recent recruits.

The new numbers, laid out by U.S. national security spokesman John Kirby at a briefing on Thursday, generally match assessments by rights groups, including Russia Behind Bars, which has said that an unofficial recruitment of Russian prison inmates was conducted separately from “partial mobilization” ordered by Putin late September.

In remarks this week, Russian Defense Minister Sergei Shoigu said that 300,000 men were mobilized in September and October, and that an additional 20,000 had joined as volunteers.

At the briefing on Thursday, Kirby said that 40,000 of the Wagoner group’s estimated 50,000 members were convicts. Kirby added that Washington believes at least 900 prisoners have been killed in recent fighting in East Ukraine. He said that Wagner, led by businessman Yevgeniy Prigozhin, appeared to blocked in a power struggle with other structures of the Russian army.

“In certain instances, Russian military officials are actually subordinate to Wagner’s command,” Kirby said. “It’s pretty apparent to us that Wagner is emerging as a rival power center to the Russian military and other Russian ministries.”

Prigozhin, nicknamed Putin’s chef because he made a fortune from Russian government catering contracts, was recorded on video in September personally going to prisons to help recruit convicts to join Wagner, with a preference for those accused of violent crimes.

The press service of Prigozhin’s catering company, Concord, at the time commented coyly on the video, saying that it “can confirm that the person in the video bears an enormous resemblance to Yevgeniy Viktorovich.”

In recent weeks, Wagner has focused on trying to capture the Ukrainian city of Bakhmut, a push that has set off some of the bloodiest fighting of the war, but so far has not yielded a long-sought victory. This week, Ukrainian President Volodymyr Zelensky visited Bakhmut and awarded medals to some of the soldiers involved in the city’s defense, highlighting Wagner’s failure so far to capture it.

“It seems as though Mr. Prigozhin is willing to just throw Russian bodies into the meat grinder in Bakhmut,” Kirby said. “In fact, about 1,000 Wagner fighters have been killed in the fighting in just recent weeks, and we believe that 90 percent of those 1,000 fighters were, in fact, convicts.”

Prigozhin prison recruitment effort, which began in late spring or early summer, was a response to an urgent need for reinforcements at a time when Putin was still resisting a mobilization, hoping to shield the Russian population from direct involvement in the war.

Throughout the war, Wagner grew in prominence after early successes in the Luhansk region that stood in contrast to multiple setbacks suffered by Russia’s regular forces, prompting state media for the first time to openly praise and lionize the mercenary group. Wagner had long operated in the shadows with the Moscow denying any connection to it.

The U.K. government, meanwhile, believes that Wagner fighters in Ukraine have ballooned from an estimated 1,000 in March 2022 to nearly 20,000, which the U.K. said it assesses to represent 10 percent of Russia’s forces on the ground.

Prigozhin and Wagner-linked recruiters have offered prisoners a pardon and freedom, in exchange for six months of fighting. They also receive a monthly salary of about $1,400 sent to the prisoner’s relatives, But they are also warned that those who attempt to flee the front line without fighting risk being shot.

Olga Romanova, the director of Russia Behind Bars, said families typically do get paid, albeit irregularly, but there is no legal basis or any guarantees that the fighters will receive what was promised to them. Even their freedom may be legally uncertain, Romanova said.

“The court decisions in case of these recruits are not canceled, they are still registered with the penitentiary service,” Romanova said. “Pardons are granted by presidential decree, and this is a very complex process, which has not been amended in any way. So there is neither a pardon nor an amnesty which the parliament has the power to pass.”

Romanova also said the inmates’ vulnerable position and lack of any legal protection had freed Wagner to engage in extrajudicial executions of ex-convicts who violated the mercenary group’s rules.

“They promise they’ll shoot them, and they do it, for using drugs and alcohol or for, say, sexual relations,” Romanova said. “I would say, these are mass extrajudicial executions.”

According to Romanova, the recruited convicts are thrown on the front line, used to clear mines or as infantry, despite often being in poor health and having little to no training, which leads to heavy losses. “Out of the first recruits who took part in the first battles in July, we only know of one survivor . . . that’s one in a unit of about a hundred people,” she said.

In November, a video emerged on a Wagner-linked Telegram account showing the apparent execution of Yevgeny Nuzhin, a 55-year-old convict who had been serving a 24-year prison sentence for a murder he committed in 1999.

In July, he signed a deal to join Wagner but defected to Ukraine where he gave a series of interviews. In the clip, Nuzhin was seen lying down with his head duct-taped to a brick while an unknown man in fatigues hit him with a sledgehammer.

Prigozhin did not directly take responsibility for Nuzhin’s death or acknowledge Wagner’s role in it but he called Nuzhin a traitor and said “he did not find happiness in Ukraine, but met unkind, but fair people.”

In a speech earlier this week, Putin said that 150,000 mobilized men have already been deployed into the combat zone, while the other half is “located and being trained at military training grounds and constitute a sufficient reserve.”

“This is done for rotation as you cannot send thousands of soldiers to the front and keep them there until the end of the war; you have to rotate them out periodically,” said Ruslan Leviev, an analyst with the Conflict Intelligence Team, which has been tracking Russian military activities in Ukraine since 2014. “You fight, retreat to the rear, rest, and fight again . . . so the 150,000 are waiting for their turn.”