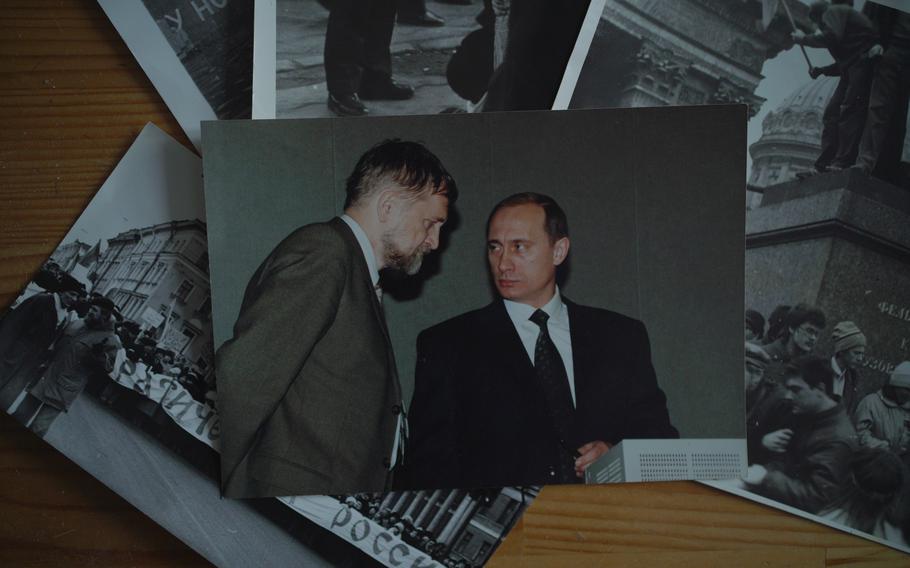 Pictures belonging to Yuly Rybakov, a dissident who was involved in a 1976 case that was investigated by a young KGB officer named Lt. Putin, shown at Rybakov's apartment in St. Petersburg on Dec. 15, 2022. Rybakov was a lawmaker when he met Vladimir Putin, then acting president, in early 2000. (Mary Gelman, VII/The Washington Post)

RIGA, Latvia — A Russian historian was browsing a display on Soviet dissidents in a dim corner of St. Petersburg’s political museum last month when the name on a 1976 KGB search warrant jumped out: “Lt. Putin.”

The historian, Konstantin Sholmov, had found a previously unknown document touching on President Vladimir Putin’s early KGB career, specifically the investigation into the city’s boldest and most poetic Soviet-era protest, in which two artists painted four-foot-high letters on the Peter and Paul Fortress.

“You may crucify freedom but the human soul knows no shackles.”

One of the pair, Yuly Rybakov, now 76 and the dissident and rights activist who coined those words, said in an interview that he believes Putin is turning Russia into a gigantic prison camp once again.

Putin’s career as a KGB officer has long explained his approach as president. But his role in searching the home of the other artist who painted that slogan, Oleg Volkov, was not known until Sholmov stumbled on the document in the Museum of Political History of Russia, snapped it and posted it on Facebook.

St. Petersburg opposition politician Boris Vishnevsky said it is definitive proof of Putin’s personal involvement in the search as a 23-year-old KGB lieutenant — a precursor to his 23 years as Russia’s leader, which have been characterized by harsh repression of political dissent, persecution of independent journalists and the repeated jailing of opposition figures.

Putin graduated with a degree in law from Leningrad State University in 1975 and joined the KGB that year after being earlier targeted for recruitment. Kremlin spokesman Dmitry Peskov said he could not confirm whether Putin took part in the 1976 investigation,

As Putin wages a brutal war on Ukraine for reasons that are unclear to many citizens, Sholmov said, the 1976 protest should send a message of courage to Russians today, and inspire them to speak out.

“We all knew where he worked and who he was,” said Sholmov, referring to Putin. “But in the current situation, I think everyone is trying to figure out what he or she can do to stop the war and oppose the regime. And now attention has been drawn back to those artists, which is very symbolic, because they knew all too well in 1976 that they were destined not for success, but for a criminal case.”

“They knew that, and they still took that action,” Sholmov said. “Now probably many people are revisiting this case and thinking that it is an example to follow.” 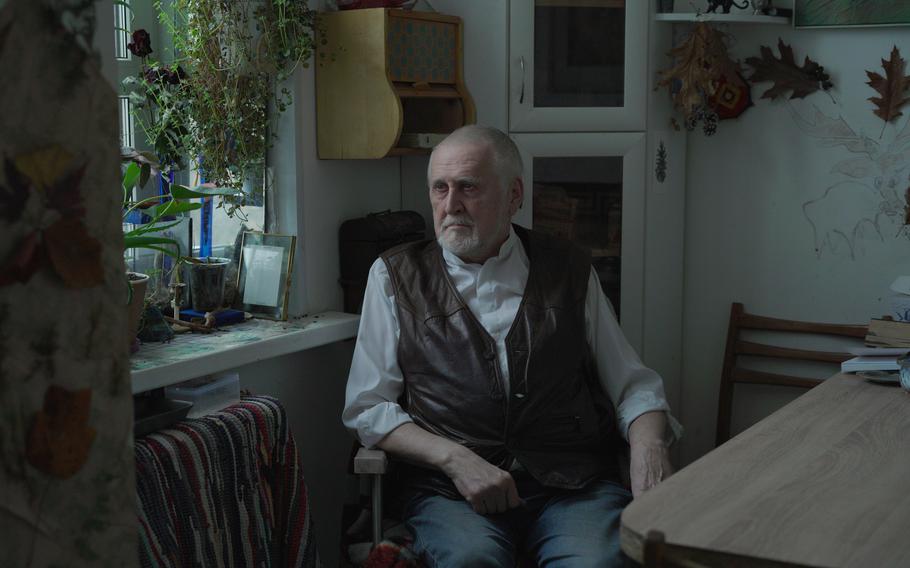 Photos belonging to Yuly Rybakov displayed at his St. Petersburg apartment on Dec. 15, 2022. One photo shows the slogan he coined and helped paint on St. Petersburg's Peter and Paul Fortress: "You may crucify freedom but the human soul knows no shackles." (Mary Gelman, VII/The Washington Post) 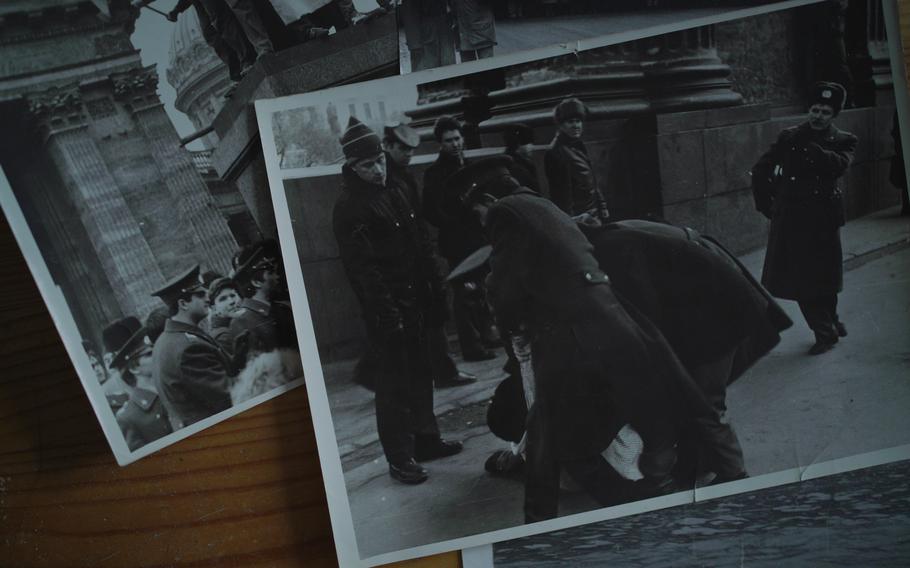 Rybakov was born in a Soviet gulag in 1946. His mother, an administrative assistant, smuggled in food to starving prisoners and fell in love with Rybakov’s father. Yuly Rybakov grew up surrounded by dissidents and founded an underground group that transcribed and distributed tiny books by banned authors.

The group posted leaflets and sneaked into transport depots at night to paint slogans on the backs of trams. Rybakov still chuckles at the memory. He saw his role as confronting evil.

“I hated the regime,” he said in the interview. “I realized very early that we lived in the largest concentration camp in the world, and we had barbed wire along the perimeter of the territory.”

“The KGB hated us of course,” he added. “They did not like the idea that we wanted to be in the open and exhibit our works to many people. Our idea was to create an all-union exhibition of nonconformist art. They did not like that we talked to foreign journalists and met foreign diplomats.”

In May 1976, Rybakov’s close friend, dissident artist Yevgeny Rukhin, died in a fire in his garret studio in St. Petersburg, where he was meeting with friends. A woman, Ludmila Boblyak, also perished.

Rybakov and other activists were sure it was a KGB arson attack and tried to stage a memorial exhibition at the Peter and Paul Fortress along the Neva River, which was quickly crushed. Then, they staged a hunger strike. “I got a phone call from a strange man who said: ‘We don’t care. In fact, it’s better for us if you all starve to death.’”

So he and Volkov decided that painting a slogan on the fortress wall — or an inscription, as he calls it — would have more impact. Creeping along the riverbank one August night with buckets of white paint and rollers, Rybakov’s blood pounded in his temples.

“I was afraid, but I’d been involved in this underground activity for a long time, and I knew that at some point I would end up in prison,” Rybakov said. He told Volkov the words he had come up with.

“Oleg became very worried. He said, ‘It’s too long. We’ll never finish it in time.’” They managed to paint the slogan, threw their rollers and paint into the river, washed their hands and walked away, trying not to run.

The river flooded that night, and the next morning police bobbing in a boat tried, rather clumsily, to cover the letters using coffin lids from a nearby workshop. But a few weeks later, Rybakov, Volkov and two women were arrested. Volkov, who died in 2005, was present when the KGB searched his apartment.

“The search took a very long time and was very unpleasant. And as we have just found out, one of the guys who carried out the search was our future president Vladimir Vladimirovich Putin,” Rybakov said.

Rybakov said Putin also took part in raiding the apartment of one of the arrested women, Soviet poet Julia Voznesenskaya, who told friends she recognized Putin from the investigation after he was appointed acting president in 1999.

The KGB seized cameras, film negatives of banned books, typewriters and tape recorders. Rybakov and Volkov were charged with anti-Soviet activities. Rybakov was sentenced to six years in a penal colony above the Arctic Circle and Volkov to seven years. The arrested women, Voznesenskaya and Natalia Lesnichenko, were freed after the two men insisted that they took no part.

After life in the intellectual milieu of Soviet dissidents, Rybakov was shocked by the apathy of most inmates. “I had no idea before what my people were like, and after my release, I had doubts about whether these people even wanted freedom and whether my struggle for their freedom was worth it. But this kind of despondency did not last long.”

For some Russians, it is a question that echoes today.

Rybakov said his 1976 protest is still relevant “because unfortunately nothing has changed.” He said that the KGB was always the “bloodiest of all the security services” and that no one should be surprised that Putin built “a fascist regime and now it’s restricting our civil rights.”

After the Soviet state collapsed, Rybakov became a politician, lawmaker and human rights advocate. When Chechen rebels took 1,500 people hostage at a hospital in the Russian town of Budyonnovsk in June 1995, Rybakov and others offered themselves as hostages in an exchange for women with newborn babies.

Years ago, he was tipped off by a security guard that the yellowing 11-volume KGB case file on him and Volkov had been abandoned in a building with other documents, so he took it, skimmed it and gave it to the museum.

When he learned recently that the file contained Putin’s name, he said he felt “surprise and a laugh, because knowing the KGB so well, I did not have any illusions about Putin. He has always been KGB and will always be KGB.”

“It’s a small thing,” he said. “But it is significant because it shows what his ideas were and what he has turned into.” Still, Rybakov is hopeful. “I don’t know when and how, but this regime will fall,” he said. “And finally after it falls, Russia will start its way to freedom.”

The Washington Post’s Natalia Abbakumova contributed to this report.