Victor Dadak, center, a deputy battalion commander, speaks with soldiers in the woods at a military position in the Zaporizhzhia region on Nov. 30. (Heidi Levine/For The Washington Post)

ZAPORIZHZHIA REGION, Ukraine — The path to a Ukrainian victory — or at least the most obvious path — will probably cut south, through the muddy and flat fields of the Zaporizhzhia region.

Following Russia’s retreat from the city of Kherson — the only regional capital captured by Moscow since the start of Russian President Vladimir Putin’s invasion — Ukrainian forces have limited options for their next big push to continue recapturing occupied territory and, ultimately, to expel the invaders.

Much attention is now shifting here, to the southern front line less than 100 miles north of the Azov Sea, where Ukrainians are eager to sever the “land bridge” connecting mainland Russia to Crimea, which Russia invaded and illegally annexed in 2014. Kyiv is also intent on liberating cities such as Melitopol and Enerhodar, where the Zaporizhzhia nuclear power plant is located.

“Everyone is talking about Zaporizhzhia. Everyone,” said Konrad Muzyka, president of Rochan Consulting, a military analysis firm based in Poland. 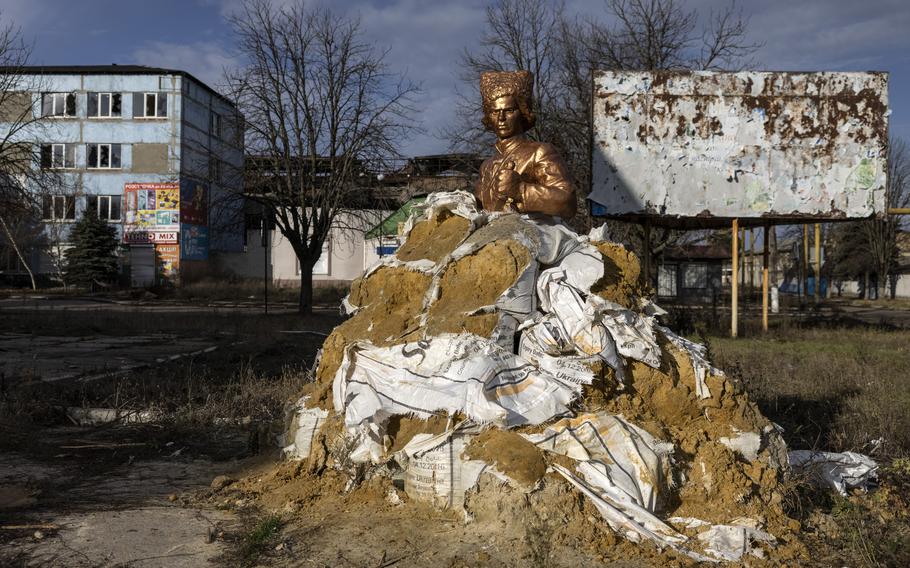 In Huliaipole, sandbags are piled around a statue of Nestor Makhno to protect it from shelling. (Heidi Levine/For The Washington Post)

But for all the logical speculation, the roads and military positions near the front line show little evidence of a buildup of troops, and there are no indications that the Ukrainians are looking to mount an offensive in Zaporizhzhia region anytime soon, Muzyka and other analysts said.

Victor Dadak, 35, a deputy battalion commander for Ukraine’s territorial defense, would not say if the country’s forces would launch their next big offensive here. “It’s a military secret,” Dadak said. “But I think in a few days the military secret will be revealed.”

Last summer, rumors swirled for weeks of an imminent Ukrainian counteroffensive in Kherson region to the south. Instead, there was a surprise, lightning push in the northeast Kharkiv region.

For now, Ukrainian soldiers in the Zaporizhzhia region appear to be in a bit of a waiting mode - waiting, in muddy conditions, for the ground to freeze.

It was the coldest day yet for the Ukrainian soldiers stationed here, and the first day Dadak noticed the ground begin to harden, he said. But the dirt was still slick enough for military vehicles to slide and get stuck. Dadak said he hoped that in the next couple of weeks their vehicles would gain more traction. 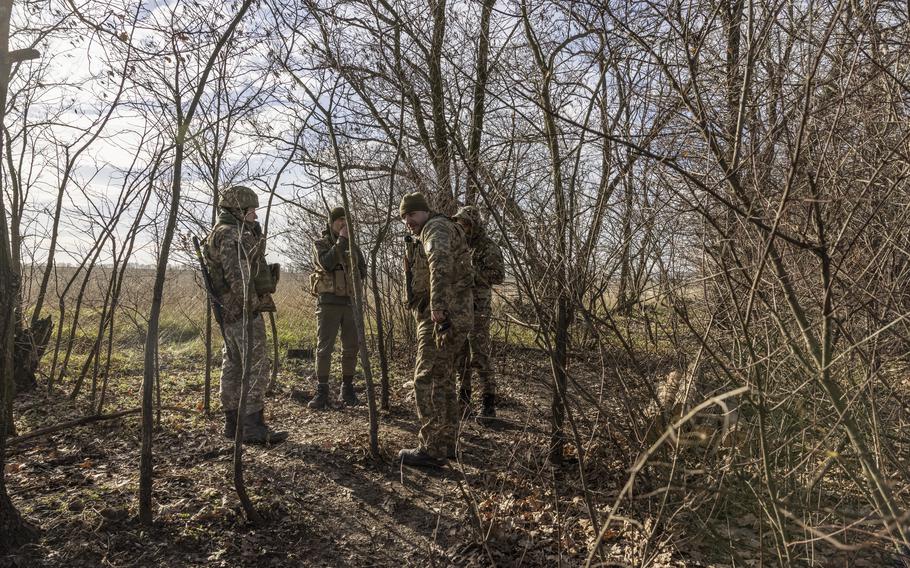 About a mile from the front line, Dadak marched through a field toward a group of soldiers taking cover in the only place they could — a thin row of leafless trees that did very little to block the biting wind. The bright sun was deceiving; temperatures had dropped near freezing. The soldiers took turns warming up in a dugout with a wood-burning stove and just enough room for two small beds.

Their main focus was to hold a defensive position, just behind the front line, and prevent the Russians from advancing north to the highway that connects Zaporizhzhia to the Donetsk region.

But the long-term goal, Dadak said, was to push south to the Azov Sea. With the right momentum, Ukrainian forces could encircle the troops now on the east bank of Dnieper River after surrendering the city of Kherson and towns on the west bank.

About 30,000 Russian troops are on the east bank of the river in the Kherson region, according to rough intelligence estimates, Dadak said.

But the immediate challenges are fierce. The ground is even muddier than in the Kherson region, Dadak said. And, after abandoning Kherson city, Russia redistributed its troops to the east, boosting its presence in Zaporizhzhia. Shelling has intensified ever since, Dadak and his soldiers said.

Russia’s force density has increased, Muzyka said, meaning it has more troops per square mile than it had at the start of the war. “So if Ukrainians do attack, it will not be easy,” Muzyka said.

While the relatively flat terrain and lack of rivers in the Zaporizhzhia region will make it easier for Ukraine to push south here, it will also give the troops fewer places to hide.

“I think that Ukrainians are probably looking at a couple of areas where they can potentially conduct a counterattack,” Muzyka said. “Zaporizhzhia is the most obvious one, which probably means it might not happen there.” 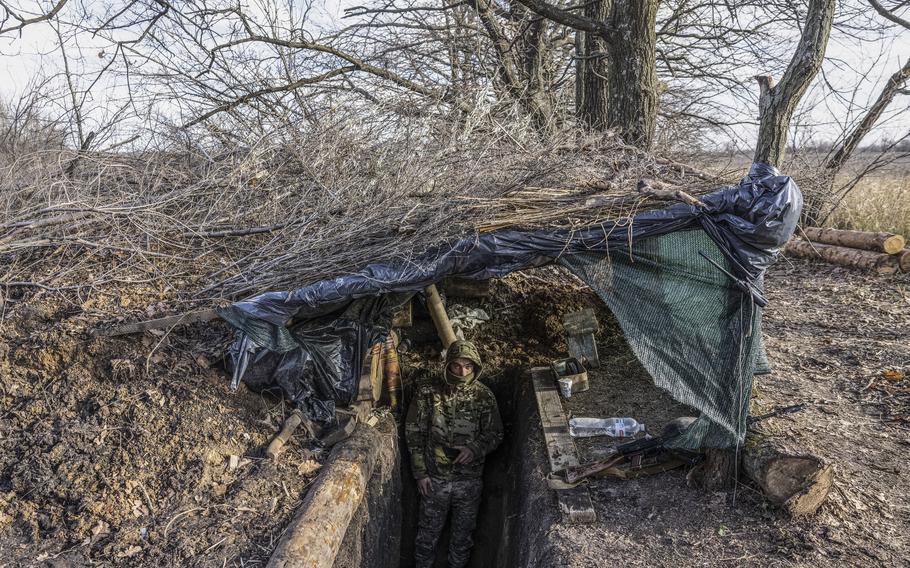 A Ukrainian soldier in the entrance to a bunker at a military position in the Zaporizhzhia region on Nov. 30. (Heidi Levine/For The Washington Post)

One of the Ukrainian military’s long-term goals appears to be an offensive that cuts south to occupied Melitopol, said Michael Kofman, a Russian military analyst at the Center for a New American Security, a Virginia-based research group.

The Russian military has been preparing for a Ukrainian offensive in Zaporizhzhia since summer, Kofman said. The Ukrainians, however, carried out offensives in Kharkiv and Kherson, west of the Dnieper River.

“Whether they can do this sometime later in the winter or next spring remains very much a question,” Kofman said.

Ukraine has sought to stabilize the line in the battered city of Bakhmut, in the Donetsk region, and a second set of forces is trying to push back the Russian military in the Luhansk region.

The question is whether Ukrainian forces have the available troops and artillery ammunition to pull off a southern offensive in the coming months, especially after taking casualties fighting in Kherson.

The Ukrainian towns closest to the front line appear nearly abandoned for most of the day, with residents emerging from their bunkers only in the morning, when Russian shelling briefly pauses. In the town of Huliaipole, famous for being the birthplace of Ukrainian anarchist revolutionary Nestor Makhno, a missile strike on city hall about a month and a half ago killed the town’s deputy mayor and one of his aides. Another recent strike destroyed a large public library, leaving a mountain of rubble.

Steps away, bags of sand surrounded a statue of Makhno, protecting it from the onslaught of shelling.

Dadak has seen the Russians using more helicopters here than they used to, he said. A nearby unit recently acquired rockets for the sole purpose of shooting down Russian helicopters.

Nearby booms of mortars and artillery have become more frequent, said a group of four Ukrainian soldiers based about a mile behind the front line, whom The Post agreed to identify only by their first names because of security risks. “This is our situation, day and night,” said one soldier, Volodymyr, who planned to head to the front line on Thursday, his 47th birthday. The shelling has become worse since the liberation of Kherson, he said, smoking a cigarette in a dark and cramped bunker.

With the temperatures dropping, Volodymyr said he wasn’t worried about the winter. The military had been preparing the soldiers with plenty of warm gear, he said. “The most important thing is to have a cold winter, not a muddy one,” he said.

Maybe then, the soldiers said, they could see some movement.

“The momentum in Kherson gave us a boost in morale, and hope that we could also do something like that here,” said another soldier, Ihor, 36.

But Serhii, 26, said he had no clue whether it would happen in the coming weeks.

“We could be here all winter,” Serhii said.