What are Articles 4 and 5 of NATO’s founding treaty and why do they matter? 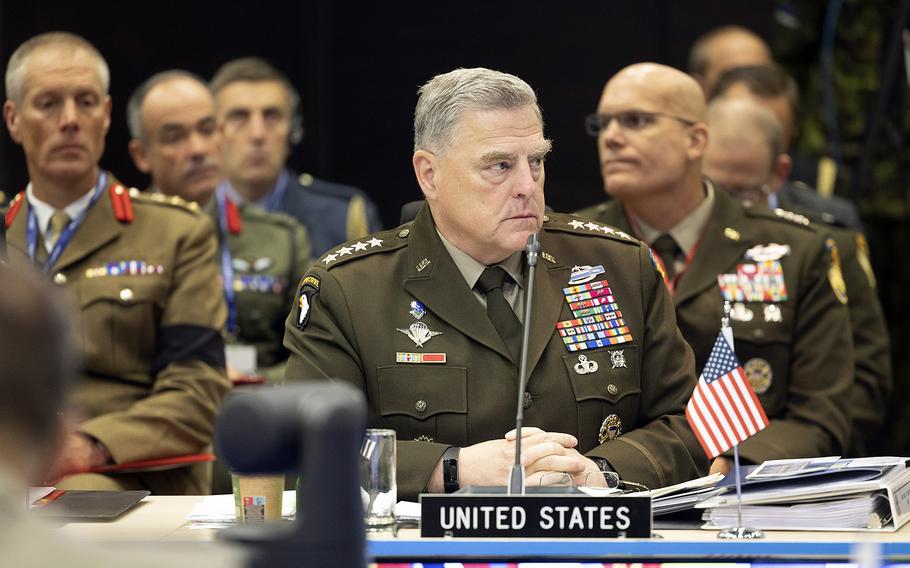 Two people were killed in an explosion Tuesday in the Polish town of Przewodow, which borders Ukraine. The incident came amid a day of heavy Russian strikes on Ukrainian territory and remains under investigation, according to Poland’s government.

On Wednesday, NATO Secretary General Jens Stoltenberg said that an errant Ukrainian air defense missile — fired in response to Russia’s attacks — was the likely cause of the blast. Still, he said, Russia is to blame for the war’s spillover.

“This is not Ukraine’s fault. Russia bears the ultimate responsibility,” he said at a news conference at the alliance’s Brussels headquarters.

Because Poland is a member of the North Atlantic Treaty Organization, a 30-member military alliance, a strike or explosion inside its territory could mark a pivotal moment in the Russia-Ukraine war. NATO has sought to deescalate the crisis, but news of the incident quickly led to speculation about Article 5 of the alliance’s charter, which states that “an armed attack against one or more of [the members] in Europe or North America shall be considered an attack against them all” and that force can be used in response.

There was also speculation that Poland might invoke Article 4, which allows members to bring any issue of concern, especially related to security, for discussion at the North Atlantic Council, the alliance’s political decision-making body.

As of Wednesday, there was no indication Poland had done so.

Article 4 of the NATO charter says that member states “will consult together whenever, in the opinion of any of them, the territorial integrity, political independence or security” of another member is threatened.

It establishes a consultation mechanism among members, “to exchange views and information, and discuss issues prior to reaching agreement and taking action,” according to an explanation on the NATO website. “It also gives NATO an active role in preventive diplomacy by providing the means to help avoid military conflict.”

Article 4 has been invoked seven times since NATO was established in 1949. Most recently, Latvia, Lithuania, Poland, Bulgaria, the Czech Republic, Estonia, Romania and Slovakia used it to hold meetings after Russia’s invasion of Ukraine.

Member states are not obligated to act if Article 4 is invoked, although deliberations could result in a decision to take joint NATO action.

Turkey, for example, invoked Article 4 in 2015 after at least 30 people were killed in a suicide bombing near its border with Syria.

At the time, the Turkish government said it wanted to inform its NATO allies about the measures it was taking in response to the attack. After the meeting, the North Atlantic Council issued a statement saying that its members “strongly condemn the terrorist attacks against Turkey,” but it did not take further action.

Article 5 states that the parties to the NATO treaty “agree that an armed attack against one or more of them in Europe or North America shall be considered an attack against them all.”

It says that each member of NATO must take “such action as it deems necessary, including the use of armed force, to restore and maintain the security of the North Atlantic area.” It also authorizes the alliance to launch an armed response, but the wording is broad and leaves room for other types of action.

The collective defense clause has been invoked only once, after the 9/11 attacks in the United States. NATO forces were subsequently deployed to Afghanistan.

Ukraine is not a NATO member, but its open interest in joining the alliance has angered Russian President Vladimir Putin, who sees NATO’s eastward expansion as an existential threat.

When Russia invaded Ukraine in February, NATO activated its Response Force — a multinational conglomerate of land, air, sea and special-operations personnel numbering 40,000 — for the first time in its history. As part of the activation, NATO dispatched troops to countries bordering Russia and Ukraine, including Romania and Hungary, to augment the battle groups already stationed in the Baltic states and Poland.

In late January, before the invasion, U.S. Defense Secretary Lloyd Austin said: “Article 5 is clear on this point — an attack against one NATO member is an attack against us all. And as President Biden has said, the United States holds this as a sacred obligation and we will do right by that commitment.”