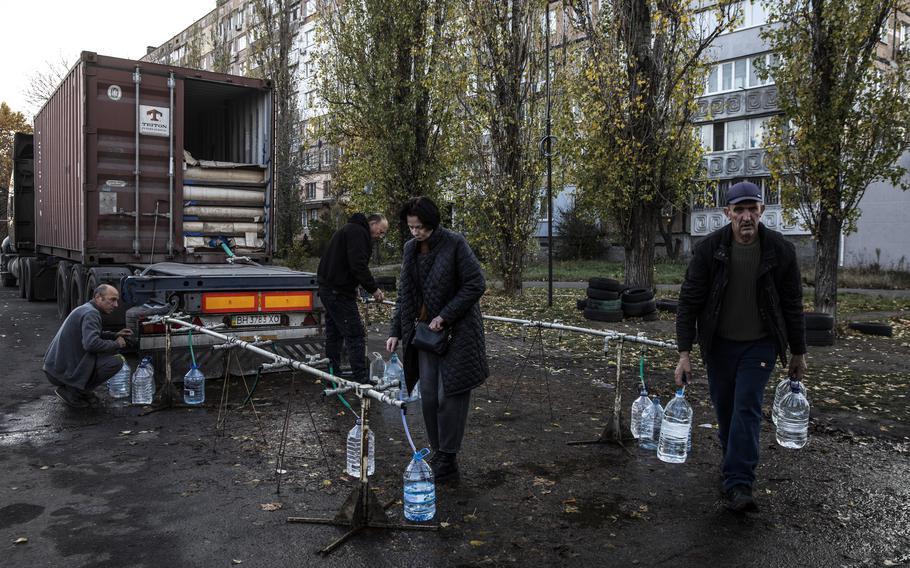 Irina Nasietkina, 55, an unemployed engineer, collects fresh water for her son at a delivery truck in Mykolaiv, Ukraine. (Heidi Levine/for The Washington Post)

MYKOLAIV, Ukraine — The tap water in this war-torn Ukrainian city is so salty and metallic that it chafes the skin. It is so discolored that it stains clothes, bottles, even dinner plates. Most residents won’t bathe in it, let alone drink it.

“You can’t even give it to an animal,” said Maryna Shchur, 27, with a nod toward bottles of the yellowish liquid stored in her bathroom.

Yet, in Mykolaiv, any water at all from the faucets is a minor miracle.

With the approach of summer — and a potential sanitation crisis — city leaders made a devil’s bargain. They began pumping water in from a brackish local river called the Southern Buh.

Six months later, the bill is coming due as the salty water corrodes steel pipes and destroys residential boilers, just ahead of the hard Ukrainian winter.

“We understood this water was of a really bad quality, but we had no choice,” said Boris Dudenko, head of the city’s water company. “It was pipelines versus people.”

Russia has stepped up its strikes on Ukraine’s infrastructure in recent weeks in what seems a deliberate attempt to inflict misery on civilians, a tactic that could be a war crime.

Drone and missile attacks have left swaths of the country without water, gas or electricity — sometimes all three — as Ukrainian authorities scramble to make repairs.

Last week, a barrage knocked out power and water to parts of Kyiv, the capital, forcing tens of thousands of people to pump water from mobile tanks.

In Mykolaiv, that has been the routine for nearly seven months — offering a possible preview, and a cautionary lesson, about what life could be like in other cities if Russia’s bombing strategy succeeds.

Mykolaiv officials are now playing water whack-a-mole, racing to fix each broken main before another one bursts. They have contracted every plumber they can find and hired a French engineering firm to evaluate alternative water sources. But if they can’t stem the leaks, the system’s pressure could drop so low that Mykolaiv is once again without water — and most of its heating — as temperatures plummet.

The city, one of Ukraine’s biggest ports with a prewar population of 500,000, is perhaps the hardest-suffering place in the country that has not fallen under Russian occupation. 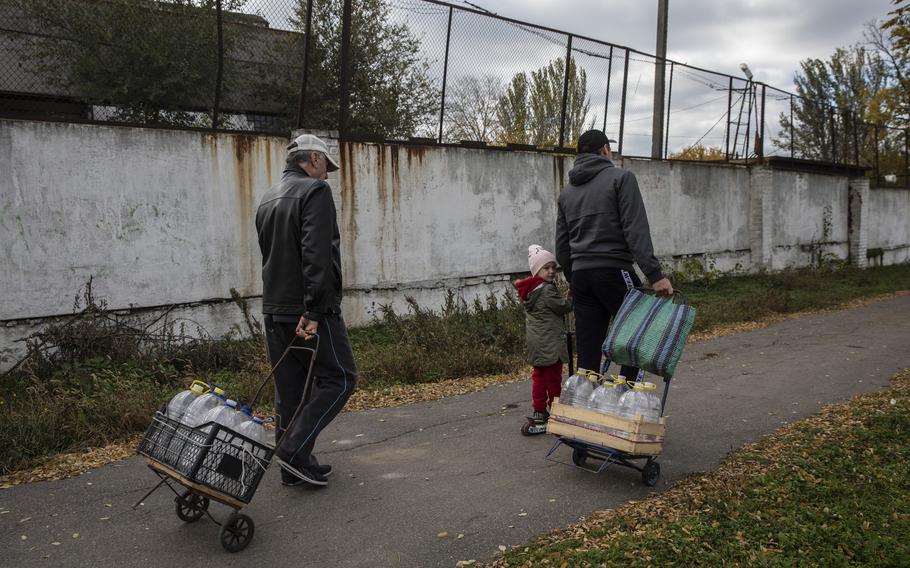 Mykolaiv was nearly encircled by Russian forces early in the invasion, and still sits just 20 miles from the front. About 150 people have been killed by near-daily drone or missile strikes that have destroyed the regional administrative building, left the road into town lined with massive craters, and sown terror.

While the strikes are more dangerous, the lack of fresh running water is what most defines life in Mykolaiv. Some filling stations are massive blue tanks donated by neighboring cities or international aid agencies. Others are semitrailer trucks filled each evening at village wells outside the city.

Tempers are starting to fray. As people waited at a filling station last week, workers began digging up a broken pipe that for three days had left the neighborhood without even the salty “technical” water.

“They could have done something on Saturday or Sunday, but it was their day off,” complained Valentyna Osadechetko, 69. “Where are our taxes going?”

Dudenko said the city had already spent millions replacing pipes that should have lasted 10 to 15 more years but were destroyed by a few months of salty water. For weeks, he said, he had resisted the idea of using the river water but relented when it was clear there was no feasible alternative.

Now pipes are bursting at five times their normal rate. Complaints have doubled.

Twenty percent of Mykolaiv’s 750 miles of pipes are made of steel, which is corroded by the salty water, he said. But trying to find a different water source is a logistical and financial nightmare. A French engineering company, EGIS, won a grant to figure out a solution but said it would take a year. Dudenko wanted preliminary findings by the end of 2022.

The simplest solution is also the hardest: push the Russians out of the neighboring Kherson region, where the water main to Mykolaiv was destroyed — and fix it.

On any given day, at least 10% of the city is without even technical water because of broken pipes, he said. His biggest fear is that too many leaks will so reduce pressure that taps again go dry. That would force the roughly 50% of residents remaining in Mykolaiv to choose between fleeing or facing winter without heat.

“This is not a war,” Dudenko said of the infrastructure attacks. “This is an attempt to eradicate the Ukrainian people.”

Like the city, each household in Mykolaiv faces difficult decisions on when and how to use the salty water. Drinking it or cooking with it are out of the question. Bathing in it is debatable.

“I can’t wash my kid in that water — it’s too dirty,” said Anastasia Trofimova, 43, as she and her 7-year-old son, Maksym, waited for humanitarian aid in downtown Mykolaiv.

Before the war, Trofimova made a living teaching chess. Now, she is unemployed. The salty tap water makes everything worse. Her faucets had broken twice, and every time she washed her son’s dirty clothes, they became a darker shade of yellow. “I tried it once on my feet and it left spots,” complained Valentyna Donchenko, 76. Instead, she and her husband devised a system. They collect five-liter bottles of water from a filling station, then heat the clean water on the stove before dumping it into a bucket suspended above their shower with a piece of wood. With the twist of a knob, the hot water sprinkles out of a nozzle as if it were coming from a garden watering can.

“This is how we live now,” Donchenko said with a sigh, as she demonstrated the makeshift shower.

Mykolaiv’s regional hospital has also struggled to live with the salty water. At first, the hospital used the river water for its heating system. Pipes quickly began to break.

“It was chaotic,” said Oleksandr Fedorenko, the hospital’s head engineer. “And to change everything is very expensive.”

Now a large blue tank of fresh water for heating greets visitors inside the building. Three more outside serve the dialysis center. The setup will change again soon with tanks moving to the basement to prevent water from freezing in winter, Fedorenko said.

More than 100 windows have been boarded up since early April, when the building was hit with cluster munitions. Yet the hospital, like Mykolaiv, keeps going.

Despite frustrations with the salty water, many residents are thankful that their toilets still flush.

“In April, when we were completely without water, we had to go to the river to get it,” said Lena Perevirzeva, 61, as she left a filling station with two five-liter bottles. “This is a blessing.”

Maryna Shchur and her mother recently returned to Mykolaiv after leaving when the water cut off in the spring. Their apartment mate, Svetlana Grachova, had stayed and suffered.

Grachova, who fled Donetsk in 2014 amid fighting between Ukrainian forces and Russian-backed separatists, was stoic. “Now the people here in Mykolaiv understand what the people in Donetsk have been living through for eight years,” she said.

Grachova said she worried that the salty water would break the building’s boiler, disabling the heat this winter. She said she was also concerned about the bomb shelter, where a broken pipe recently ruined the mattresses, pillows and cots.

The mood in the city is a mix of resolve and rage toward Russia. “I’m ready to do this every day for the rest of my life,” Donchenko said of her water hassle, “if it means those bastards never reach Mykolaiv.”